Wizards Vs. Bucks Preview: Meet The Deer Who Maybe Should Be Feared

Share All sharing options for: Wizards Vs. Bucks Preview: Meet The Deer Who Maybe Should Be Feared

Fear The Deer? Fear the Deer. Let's meet the Milwaukee Bucks below the jump.

Are they good in general?: They finished 35-47 last year and are off to a 1-1 start this season, with a tight loss on the road to the Bobcats and a tight win at home over the Timberwolves (albeit in a game they led by a lot most of the way). So they're mediocre, I guess

Are they good against the Wizards? They went 2-1 last year against the Wizards, with one a damaging 15-point loss in February that really hurt their playoff hopes. They did rebound to win by 19 in the Verizon Center in March, though.

Are they fast or slow? What's with the Wizards playing a bunch of slow-paced teams early? Milwaukee was the sixth-slowest team in the league last year, even though they forced a ton of misses and can't score in halfcourt sets. They're playing at over six possessions faster per game this year, but it's only been two games.

Are they especially good at anything? The Bucks simply get after it defensively. Sure, they hack a bit, but they constantly frustrate you and make it next to impossible for you to run your sets. If you push through, you'll at least draw lots of fouls and win a choppy game. If you don't, you end up getting really mad. In the first two games of the year, the Wizards have stopped running their set on offense under far less stressful circumstances. I'm not feeling too good about what will happen tonight.

Are they especially bad at anything? Luckily, Milwaukee's offense is as awful as its defense is good. The Bucks were historically bad on offense last year, and in theory, things shouldn't be much better with Stephen Jackson and Beno Udrih as the only replacements. The Bucks have risen a bit in the early going this year, but they also played two bad teams, so I wouldn't read too much into it.

Are there any people involved with the organization that Mike really likes? I actually think Udrih gets a bad rep. He's a shoot-first point guard, sure, but he's tricky on pick and rolls and he's usually able to be productive. There are lots of contenders who would benefit from him as their third guard.

Are there any people involved with the organization that Mike really doesn't like? Brandon Jennings has had only one month of being a good point guard in this league. Maybe he eventually gets there, but he does not belong in the same breath as many of his younger peers right now.

Are there any players poised for a breakout? Keep an eye on Jon Leuer, a second-round rookie who had 14 points and eight rebounds in 20 minutes in the Bucks' win over Minnesota on Tuesday. He's a load in the paint and slides his feet well defensively. How the Bucks keep finding guys like this, I'll never know.

Are there any players the Wizards especially need to worry about? Stephen Jackson will be Milwaukee's primary scorer, and he is prone to firing errant shots. Andrew Bogut is the top post player, and the Wizards have to know he's equally good with both hands. They also have to guard him on the perimeter this year. Last year, he didn't hit a single shot from 16-23 feet. This year, he's already 4-5. Small sample sizes!

Is their mascot cool? Yes. How can you hate Bango? 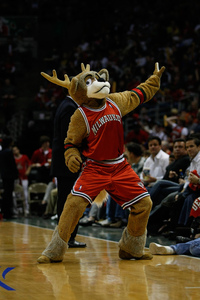 Any other random quirks? It'll be fun to see Shaun Livingston again.

Game thread + pregame nuggets at 7:30, game time at 8:30. I'm once again out of town, so Sean is handling all recapping. I'll be watching on LPBB later.