The Washington Wizards take on the New Jersey Nets tonight in their season opener at the Verizon Center. Read on to find out more about the Wizards' opponent, which is basically Deron Williams, an injured Brook Lopez and a bunch of random dudes the Nets are hoping to somehow turn into Dwight Howard.

Are they good in general?: They finished 24-58 last year and 4-8 with Williams playing. They didn't make any major moves, and they lost their second-best player in Lopez to injury. So no, they are not good.

Are they especially good at anything? Not really, no. If you had to point to something, they were a pretty decent rebounding team last year thanks to the work of Kris Kardashain Humphries.

Are they especially bad at anything? The Nets were dead last in the NBA in defensive turnover rate last year, which bodes well for a Wizards team that has been prone to turnover issues in the preseason.

Are there any people involved with the organization that Mike really likes? Always been an Anthony Morrow fan, though I really haven't seen him do much to progress from just being an elite shooter.

Are there any people involved with the organization that Mike really doesn't like? Since Lopez is injured, I won't have to go on about how overrated he is.

Are there any players poised for a breakout? Keep an eye on Damion James, a swing forward from Texas who will have the opportunity to nail down good playing time at small forward. His top competition is former Knick Shawne Williams, who was signed late in camp and is more of a stretch four.

Are there any players the Wizards especially need to worry about? Besides Williams, of course, the Wizards need to make sure they close out strong on Morrow and keep Humphries off the offensive glass. Do those things and a win should come easily.

Is their mascot cool? It's just a bear silver fox, which is kind of lame, even next to Alex Ovechkin. 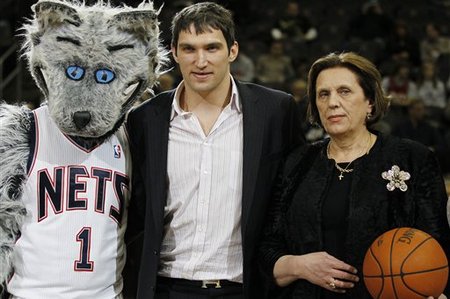 Any other random quirks? Welcome back, DeShawn Stevenson!