WASHINGTON, D.C. - Two years ago, the Washington Wizards wore T-shirts that said "It's Our Time" and were handed out iPod touches with the plays on them. They went 26-56, had their entire team traded away and suffered through one of the biggest scandals in NBA history. Last year, the Wizards pushed together a "Back to Basics" theme and were each handed iPads with the plays on them. They went 23-59.

This year? No iPod touches, no iPads, no slogans. Flip Saunders said that, with the lockout, there was no time for any of these things right away. Andray Blatche had a different take:

Instead, the Wizards have a new symbol: the hard hat. In a tradition that Saunders admitted is "maybe not original," he is handing out a white hard hat to a player who worked hard in practice. It's a practice reminiscent of what the Washington Capitals are known to do after games.

"He said every day, if we work hard at practice, somebody gets a hard hat," John Wall said. "The main thing for us is that we're trying to work hard no matter what."

On this day, Saunders handed the hard hat to Wall and gave him the option of handing it to someone else. Wall decided to keep it instead.

"I thought about it, but I think I played hard today, so I just kept it," Wall said.

"I told him he could have it or he could pass it on to someone else," Saunders added. "I guess he decided he worked hardest."

It's all a part of a training camp focused on "defense and rebounding," Blatche said, multiple times in fact. As further proof, check out video of the defensive drill the Wizards ran to close practice. Anyone who played any level of competitive basketball here probably recognizes this one. 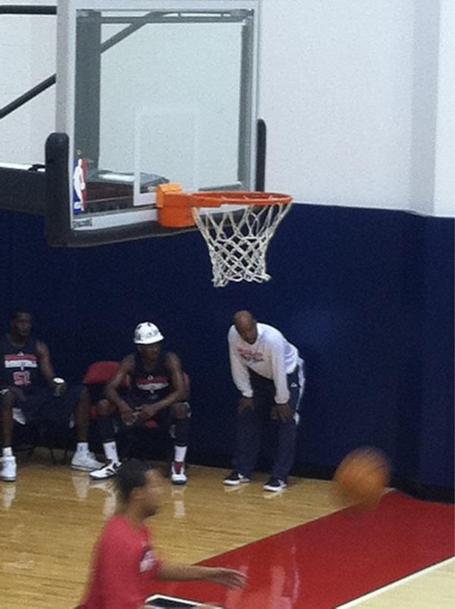