Share All sharing options for: On trading Andray Blatche

And so, it begins.  After a disappointing start to the 2010/11 season, Andray Blatche is definitely on the trading block.  Reports indicated that the Wizards were "gauging interest" in trading Blatche as recently as last week, and on Sunday, we learned that the Cleveland Cavaliers may be one interested team.  It's not clear what Cleveland would give up, and it's not really clear whether Cleveland's interest is serious anyway, but clearly, Blatche is on the block.

It's a very quick turn for the Wizards, who signed Blatche to a five-year contract extension just over two months ago.  Something has convinced the Wizards that their faith in Blatche wasn't justified, and while we can all speculate about whether that may have been an off-court incident like the fight he had with JaVale McGee, it could very easily have to do with what they have seen on the court.  Blatche's per-game averages aren't bad, but he's doing it with poor efficiency and horrendous defense.  We the fans mostly seem frustrated with his lack of development after he broke out at the end of the season last year.  I'm seeing a lot of "Trade Blatche NOW" comments and FanPosts, and I understand the sentiment completely.  More than any other player, he's disappointed me too this year.

But the Wizards cannot make an emotional decision here.  They're in a tricky spot, and they need to consider all sides of this situation before they figure out what to do.  The worst thing the Wizards could do would be to trade Blatche simply out of frustration.  They have to figure out whether it's the right decision going forward and try to separate their own disappointment from the decision-making as much as possible.

So what is the right decision?  It's tough, but I think I would indeed trade him at this point.

There are two sides here that I think have a lot of merit.  The "trade Blatche" camp seems to think that Blatche's presence is stunting the team's culture change, and as long as he is around, he will receive entitlement minutes, entitlement shots and the like.  Trading Blatche may be addition by subtraction in the long run, as it'll give more minutes to hungrier players.  The "keep Blatche" camp is concerned that Blatche is still relatively young (24) and is concerned about trading the only player on the roster who has something resembling a low-post game.

I think the "keep Blatche" camp is right on one thing: trading Blatche will probably make the team worse in the short term.  Despite Blatche's frustrating offensive game, he is a better shot creator than any other big man on the roster.  Shot creation is a valuable skill, even if it is inefficient shot creation.  The ability to get your own shot causes more defenders to pay attention to you, which opens up space for your teammates.  As we saw in the New Orleans game, shot creation is a major weakness with this roster, and it'll only get worse once you remove Blatche from the equation.  Taking away Blatche and not bringing in a comparable shot creator means you're asking John Wall to set things up for everyone, and teams will shut that down, especially considering Wall is still a rookie learning how to play point guard in this league.  There's a reason the Wizards remain a more efficient offensive team with Blatche in the game than with him on the bench.

In other words, I have a really hard time believing the Wizards will take off if they remove Blatche's "cancerous" play from the equation.  It's more likely that they'll play with more energy for a couple games, then revert because they'll miss what Blatche does bring to the table.

At the same time, though, the short term doesn't really matter with this team.  This is a young roster that just traded away its most frequent creator (Gilbert Arenas) because they are thinking long term.  Only two teams -- Sacramento and Cleveland -- have worse records than the Wizards, and only two teams have a lower point differential.  Nobody has been shy about this being a rebuild, and nobody should be.

And right now, Blatche isn't providing plays that will fit in with a winning culture.  His defensive effort has been horrendous all season, and it was again in the New Orleans game.  (Just check this play).  His lack of individual improvement this season, at an age where most players put it all together and in a situation where he'll receive plenty of chances, is a huge concern on a team where player development is the biggest goal.  We're now two months into the season, so Blatche's massive drop-off is more of a trend than an anomaly.  The broken foot he suffered in the summer can't excuse the following statistical cratering. 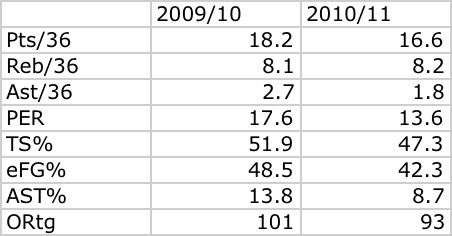 Twenty-four year olds have bad stretches like anyone else, but almost nobody drops off as drastically as that.  Keep in mind also that Blatche's numbers there are his full-season numbers in 2009/10, so we're not even comparing Blatche in 2011 to the Blatche who finally put it all together at the end of 2010.  If one foot injury causes Blatche to fall off this drastically, it makes you wonder about what his work ethic really is.  For a team where hard work and good process needs to be stressed, it's not productive to keep a guy who hasn't displayed good process.

For the longest time, I was in the first camp, but I think I've changed over to the second after thinking about this more.  Trading Blatche may hurt in the short term, but his lack of improvement has become really concerning.  I don't doubt that the Wizards will become a worse team in the short term, because Blatche can help in spite of himself with all his skills, but I'd rather have good process and bad results than bad process and good results.  If the Wizards were winning, it might be different, since there are enough good habits happening elsewhere where you can isolate and minimize the impact of Blatche's bad habits, but the Wizards aren't winning.

The question then becomes: what's a fair package to take back for Blatche?  As frustrating as Blatche is, he is a young-ish big man on a reasonable contract.  There's no real purpose in dumping him for nothing, especially two months after he got a contract extension.  That'll really expose the Wizards as the sucker in the room, and I think they know that and are being careful.  But I also don't think they should be all that concerned about getting "equal value" either.  Expiring contracts and a young player is fine.  A draft pick is better.  A role player, if he's young and has something of value to provide, potentially works too, depending on the player coming back.

Many of you are concerned about another Chris Webber or Ben Wallace situation, but I think these situations are different.  The Webber trade was an issue because we got a player past his prime in return who we promptly gave a huge extension.  The Wallace situation was bad because Wallace was very productive in limited minutes, as opposed to Blatche, who has been unproductive in heavy minutes.  Productive per-minute players tend to remain productive per-minute players when they get more minutes, and regardless, we never really gave Wallace a chance to demonstrate if he'd follow the trend here.  We know very well what Andray Blatche is at this point, and while he might break out elsewhere, he's not breaking out here.

At the end of the day, it looks awful to trade Blatche now, but that doesn't mean the Wizards should pass on doing it.  They have to think about it carefully and not trade him for peanuts, but if a halfway decent offer comes along, they should jump on it.  The long-term benefits at this point seem to outweigh the short-term cost.