Coming back from last night's heartbreaker is going to be tough. The Grizzlies have won four of their last five and are 13-7 at home on the year. They're coming off a comeback win on the road against a tricky Philadelphia team that has played a lot better themselves recently.

The good news is that O.J. Mayo won't play because of his 10-game suspension for testing positive to DHEA, the same steroid cursor that Rashard Lewis took a couple years ago. He finally opened up about that today, saying he got the substance at a gas station.

"It was an energy drink or something similar," Mayo said. "It was bad judgment on my behalf because I maybe should have gotten it checked out by Drew (Graham, the team's athletic trainer). I can't go too much into it because of the NBA."

"It's not like I went to a GNC and got some kind of muscle armor or something," Mayo said. "Or ordered some supplement off the internet or anything. A local gas station got me hemmed up. I've definitely got to make better decision. I admit to my mistake and it's something I got to deal with."

Anyway, this is your game thread. Below the jump, some spare notes on the Oklahoma City loss from re-watching it.

Good offense: I thought the Wizards did a really good job running their offense and not resorting to hero ball. Nick Young took some bad shots early, but otherwise, everyone got good looks. The only one who really didn't capitalize on them was John Wall.

On Trevor Booker: Obviously, Booker had a really nice game, showing what he can do when he gets minutes. Kevin Durant made him look silly several times on backdoor cuts (I counted three, including one where the Thunder didn't get Durant the ball), so I wouldn't say his performance was perfect. That said, I like how he moves and battles on offense - he's one guy who will never be stationary. He needs minutes, and I'll be angry if they go away. I also think he can get away playing the three with Rashard Lewis at the 4, seeing as he won't be going to Durant every night.

Flip messed up in OT: I didn't like the decision to go with Yi over Al Thornton once Booker fouled out, because it put Lewis on Kevin Durant. Lewis really stunk it up late, forcing Andray Blatche to switch out on a screen on three separate occasions. Those are detailed more here, but Durant obviously went 3-3 with Blatche having to switch onto him. Just dumb by Lewis, and not smart by Flip Saunders, because he had to know Lewis was dragging at that point. Bring in the guy with fresh legs to stop the best scorer in the game.

John Wall got tired: Checking Russell Westbrook is exhausting, especially when your big men consistently stepped up too much on screens instead of laying back and forcing Westbrook to beat you over the top. Wall got little good, solid help most of the night, and it took it's toll late, when he was barely involved. He also had a major breakdown on Westbrook's dagger layup that put OKC up seven. It took Westbrook a little bit to realize what it takes to stay involved concentrating on every possession, and the lessons he learned were put into action tonight. Hopefully Wall learns too.

Not much Dray: I thought it was pretty striking that Andray Blatche wasn't involved in the offense much in the fourth quarter, especially after what happened in New York. He of course got more involved in overtime and late in regulation, hitting a layup over Jeff Green, missing a bank shot off a spin move (a shot the OKC commentators killed him for, but the shot clock was winding down and it was a good shot - he just missed it) and, the killer, missing a wide open layup off a beautiful cut that would have given the Wizards the lead in the second overtime.

The bad call that really hurt: I didn't notice anything too ridiculous from the referees on second glance - only a team that's strong enough to power through contact (OKC) getting the benefit over a team that wasn't. But there was one call that I think really hurt. Obviously, the one most will point to is the continuation foul on Durant that knocked Trevor Booker out of the game, but this one was more annoying to me. After the missed layup, the Wizards got it back, and Wall tried to drive. In response, Westbrook blatantly put two hands on Wall, in the kind of hand-check that was called even back in the 90s. That threw Wall off-balanced, which caused him to miss badly. Here's a screenshot of it. 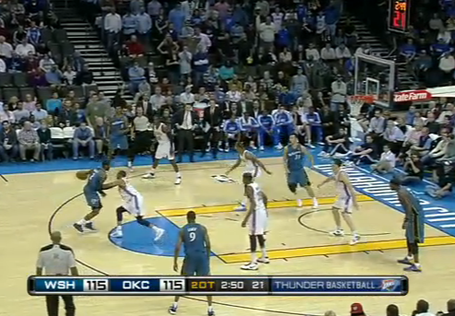 Given the way this game was being called so tightly, I can't believe that one was uncalled.

-Random: The OKC broadcast caught this exchange in the fourth quarter between Durant and Serge Ibaka:

The OKC broadcast said they were "discussing" their defensive assignments. 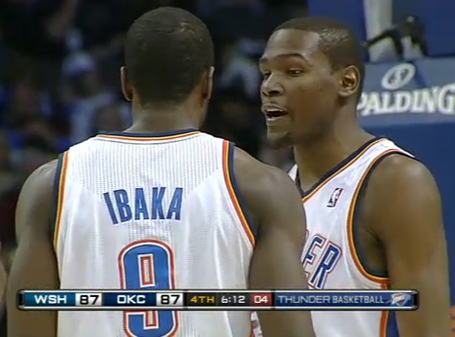