Share All sharing options for: Wishes for the New Year: Video Game Edition

As fans of a rebuilding NBA team, morale is hard to come by.  For those of us old enough to have made a few more than a few mistakes, the New Year is supposed to be the chance to make a clean break.  Even simple changes turn out to be challenging, and for a professional basketball team, even integrating a single new player (see: Jefferson, Richard) can be a struggle for an experienced squad.  Sometimes it doesn't work out at all. 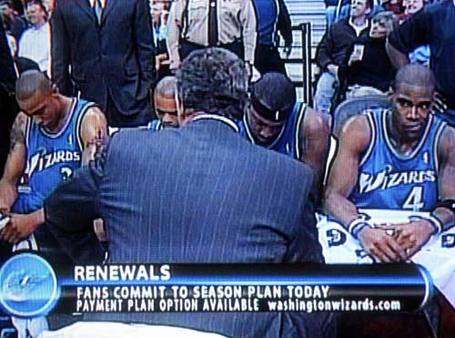 Appreciating the changing face of a franchise in dry dock is never an easy task, or a simple one.  Young players must reinvent their play even as they discover themselves.  It's a difficult challenge the best overcome.  So much depends on who you have available, and what version (see Wallace, Ben/Rasheed).  Your needs become clearer as your assets start to become known.  With Kirk Hinrich turning in his best performances at PG and Nick Young evolving into the catch and shooter we saw glimpses of last year post-All Star break, our back court only seems to require a back up SG to give us the mix of veteran savvy and developing talent we're all looking for.  Our front court has...other issues.
But that said, the New Year is about taking stock, looking forward and getting ready to set the world on fire, just don't bother to check whether your matches are wet.  The New Year is upon us!  Unbridled optimism!  Your Wishes for the New Year: Video Game Edition is S-mart's top of the line.  Retails for about a hundred and nine ninety five.  That's right.  Shop smart.  Shop S-mart.

Disclaimer: Hopefully representing what we'd like to see out of our draft picks getting some burn, irrespective of the finer points of what the coaches may or may not be telling them to do.

A Suggestion for Ted - Epic Edition

No wish list would be complete without a shout at the mountaintop.  Rename us the Washington Zeppelin.  Singular.

It's the Verizon Center, and Verizon has a deal with Led Zeppelin.  Destiny is calling.  A Happy New Year from Wall to Wall, Bullets Forever readers, and Good Night!