With the first day of Wizards training camp coming, Bullets Forever is asking 20 questions about key issues with the team in 2010/11.

First let me explain what I mean by struggle, survive or thrive. I actually believe that these players will eventually mesh pretty nicely. While it is reasonable to wonder if John Wall and Gilbert Arenas can share a backcourt, I believe that Gilbert will respond nicely to being able to focus on his specialty and more natural position of scorer, which will complement Wall's abilities as a true pass first, point guard. Mix in Andray Blatche and Josh Howard's ability to score and you have the makings of a very interesting offensive team.

Will they click right away? No, it's not likely. You may have heard that Gilbert hasn't played much lately. Howard is recovering from ACL surgery and will likely be ready by November, and Blatche is nearly healed from surgery on his foot. Wall is talented, but is a rookie and will likely make his fair share of mistakes. This will likely add up to some uneven play early in the season as these four players adjust to one another.

With that as the backdrop, instead I am thinking of struggle, survive and thrive in terms of the team's performance. Will the team struggle - performing well below .500 basketball, survive - play at or around .500 ball, or thrive - perform above .500.

Question 10: Will Wall, Arenas, Howard and Blatche struggle, survive or thrive together?

As I began to think about this question, I reflected on Mike's recent post, "Why John Wall's scoring numbers may be lower than you'd expect next season." In it Mike discussed the usage percentages of John Wall's new teammates and what impact they would have on his statistics. I thought that these statistics could be used, in part, to give us a sense of how this team may perform in 2010/11.

As Mike pointed out the Wizards will have three high usage players in its starting lineup. Here is his definition of high usage:

Defining a "high usage" player is pretty easy, because we have a stat for that called usage percentage. I've used this one before, but if you're not familiar with the stat, it basically identifies how often a player ends a possession by his team while he's in the game. Those actions include a missed shot, a turnover or a drawn foul. The league average last year was 18.9%, according to Hoopdata.

It is important to point out that from this point forward, we will focus on a subset of the NBA teams. Using usage percent (USG%), I identified the teams that have three or more "high usage" starters. Thanks to Basketball-Reference.com, there are 14 franchises, including the Wizards, which fielded teams that had three or more starters with usage rates above 18.94%. Let me be as clear as I can, the focus was on three or more high usage starters. There were other teams which had two high usage starters or high usage bench players but those teams were eliminated from this exercise. The goal was to create a scenario that was as close to the Wizards situation as is possible.

What immediately jumps out at you, is that there were an almost equal number of successful (8) and unsuccessful (6) high usage teams. To make our work a little easier we will break these high usage teams into slightly smaller categories. For example, we will continue to refer to some of them as "high usage" and others as "low usage." These are relative terms because all of these teams are high usage, except some are more high usage than others. This was determined by comparing the team's three starters against the average NBA USG% of 18.94. Those teams whose starters were most significantly above the average were labeled "high usage" and those who were closer to the average (but still above it) were labeled "low usage."

As previously mentioned, the performances of these teams were all over the map. To give you a better sense of it, I've broken them out into a number of different sub-categories:

These teams contained three or more high usage starters, had offenses that were in the top half of the league and finished the season with a winning record. Both Cleveland and San Antonio each had top-15 offenses and top-15 defenses based on offensive and defensive efficiency ratings.

It is also interesting to note that Cleveland is one of three teams that had four high usage starters - the other two are Houston and Philadelphia. Out of the three teams, Cleveland was clearly the most successful. Cleveland had one player, James, who was clearly more dominant, from a usage rate perspective, than his teammates; he is also a talented scorer. However, because of the high usage nature of him and the other three starters it creates a situation in which their offense, particularly in the playoffs, is not very effective. So it would seem that having four high usage players may limit your success in the NBA.

Golden State clearly can score the ball, but their lack of defense (and injuries) did them in. Golden State's numbers support the idea that a good offense and poor defense does not translate into success on the hardwood. 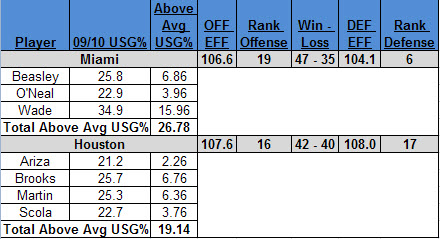 Miami is essentially the anti-Golden State in the sense that they too had high usage players, but they had a middle of the pack offensive efficiency rating and they played great defense. Their ability to defend is what ultimately aided them to make the playoffs. However, their exit from the playoffs was largely due to their inability to score the ball. Here we see that while defense will keep you in games, you ultimately need to be able to score.

Where as with Houston their offense and defense were middle of the pack. Houston was able to score the ball well enough to win 42 games, its relatively poor defense kept it out of the playoffs in the West.

First let me mention that this graphic is mostly for demonstration purposes only. The USG% figures for Arenas, Blatche and Howard are from 2009/10 and for Arenas and Howard do not cover the full season. Howards' figures mostly cover his season with Dallas. One can easily make the argument that all three players roles were different last year than what they will be in 2010/11. I would also point out that Arenas and Howard did not completely contribute to the offensive and defensive stats listed as well.

A high usage team, like the Wizards, that struggles to score and has a middle of the pack defense does not translate into wins.

Annually, the primary concern about the Wizards often revolves around their defense. Well in 2009/10 they made progress, over the previous year, and actually finished in the middle of the pack. However, the biggest drop over the past couple of seasons has been on the offensive end. And in particular this past season the team's scoring average ended near the bottom of the league. Some of this can be directly linked to the absence of Gilbert Arenas and the adjustment period required when switching offenses. 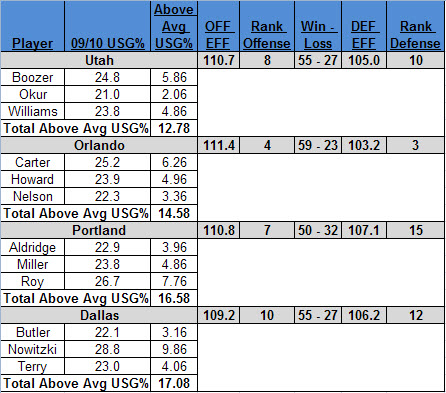 Relatively low usage teams can be successful as well. The relatively low usage rates appear to be as a result of these teams being fairly deep. While each team has primary scorers, their bench carries some of the burden to score which translates into top-15 scoring teams. Each of these teams also finished in the top-15 on the defensive end. Ultimately, these teams indicate that a deep team with relative balance between offensive and defensive production provides a clear path for success.

No teams fit into this category.

No teams fit into this category. 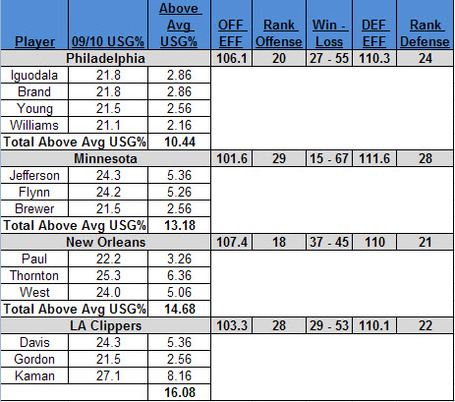 Similar to the high usage Wizards, these relatively low usage teams also struggled to score. Each of these teams also finished on the bottom half of the league defensively, which only complicates their problems. As a result, it is no surprise that these teams finished with sub .500 records.

So what does all of this mean for the Wizards?

On paper the Wizards should be better offensively. They've added Josh Howard, Yi Jianlian and Kirk Hinrich will chip in offensively; Gilbert Arenas returns; the continued development of Andray Blatche, Nick Young and Al Thornton; and they've added a pass first, true point guard in John Wall. Once the players settle into their roles this should help the Wizards become a better offensive team than they were last season.

Defensively the team made progress last year in part through effort and focus. This off-season they went about drafting players like John Wall, Kevin Seraphin, Trevor Booker and even Hamady N'Diaye (who may not make the active roster this season) who are physical and play defense. The team also added Kirk Hinrich, Yi Jianlian and Hilton Armstrong who are expected to contribute defensively. It also should not be overlooked that the team resigned Josh Howard, who for his position, is a sound defensive player. The Wizards are also counting on the continued development, particularly defensively, from Gilbert Arenas, Andray Blatche, JaVale McGee, Al Thornton and Nick Young. The goal would be for all of these changes to help further improve the Wizards on-court defensive effort.

Gone are two of the three Wizards former All-Stars (Antawn Jamison and Caron Butler). However, the Wizards off-season changes, on paper at least, give the Wizards a deeper team than they have had in quite some time. The team is young, full of potential and largely untested but still deeper at nearly every position. The added depth should ease the scoring burden of the front line players, helping to reduce their USG%. Added depth for the Wizards can also create a situation where maximum effort can be given, particularly on the defensive end of the floor.

So will they struggle, survive or thrive?

Initially they will struggle, and then they will survive. Given that this is virtually a new team and some of its main parts are either mending from injury (Blatche & Howard), returning from extended absence (Arenas), new to the NBA (Wall, Booker and Seraphin) or new to the team (Hinrich, Jianlian and Armstrong), I believe this team will initially struggle as they adjust to one another. However, for many of the reasons stated above, I believe they will ultimately settle down and begin to "survive," playing at or around .500 basketball.

Longer term the Wizards can look to the Dallas Mavericks as an example of how to thrive. The Mavericks (see above) are relatively deep and as a result have a "low usage" team. They also have a top-15 offense and top-15 defense which helped them make the playoffs. The Mavericks also have a pass first point guard (Jason Kidd) and three (relatively) low usage starters - Nowitzki, Butler and Terry. While the positions of the players aren't the same, the Wizards can look to how these three relatively "low usage" starters operate together with Jason Kidd leading the way. This could help provide a good template to use with Wall, Arenas, Blatche and Howard.