If you turn the clock back to the summer of 2009 for a second, you might remember that Flip Saunders was doing everything he can to tell Nick Young to play more like Rip Hamilton.  Saunders was begging of Young to become more "efficient," or, in his words, become the kind of player who "scores 22, 23 points and you wouldn't notice."  So drastic was Saunders' reconstruction of Young's game that Young uttered these lines a year ago.

"Eventually [the freelancing] is gonna come back, but I'm doing so good with this, I'm gonna stay with this for right now. "This is what they want me to do, I shouldn't change it. I've been working all summer on this."

But if you subscribe to the belief that Young was only going to be a useful NBA player if he cut out all the freelancing, fixed his shot selection and dedicated himself more to defense, then there might actually be reason to be encouraged by Young's 2009/10 season.  Not blown away, mind you, because his production did take a pretty substantial nosedive, but encouraged.

Why? Because Young's style of play did indeed change a lot last year.

The common image of Young is of a player that breaks the offense to dribble needlessly and shoot contested mid-range fadeaway jump shots.  Saunders had that image of him too before taking over last year, and his priority was trying to fix it.  He wanted Young to be more of a catch-and-shoot player, which would thereby increase his efficiency.

So was Young more of a catch-and-shoot player last year?  The answer is a resounding yes.  These shooting stats from HoopData tell the whole story.  There was a significant leap last year in the number of baskets Young scored that were assisted. 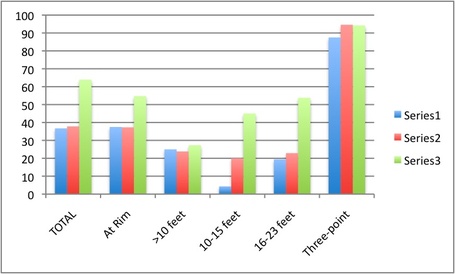 Clearly, Young went from being the kind of guy who would always freelance into one who was more willing to play off others.  The dribble pounding that we would often see in his first two years lessened considerably last year.  It may not have resulted in significant production right away, but a lot of that has to do with Young's horrendous start to the year.  In the second half of the year, he grasped the concept of playing off others a lot better.

Saunders was clearly successful in remodeling the way Nick Young played last season.  This year will ultimately determine whether Young is capable of playing the way Saunders wants him to play in a consistent manner.  But if you subscribe to the belief that players need to be torn apart before they can be built back up, then you have to be encouraged by the changing nature of Young's game.