According to Jonathan Givony of DraftExpress (via @DraftExpress), Nick Young and JaVale McGee are playing in the championship game at the HAX Real Run Pro League. The HAX Real Run league is played at the Hangar Altheletic Xchange in Los Angeles and typically features 6 teams featuring NBA players. The league, which runs from August 2 - 26 uses NBA rules and NBA refs.

It appears that the rosters may have changed since they were originally posted. According to the HAX website, Nick Young was originally listed as part of Team ESPNZone with "Mike Mayo, DJ Strawberry, O. Ibekwe, Ron Artest, Shaun Livingston, James Wright, Brian Cook, Ray Reid, Ron (?) and Marcus Palmer." At that point, likely due to his commitment with TeamUSA, JaVale McGee was not listed as part of the team.  By the way, Team PokerStars.Net included former Wizard(?) Javaris Crittenton.  It appears that Javaris is hoping to generate some interest from other NBA or European teams.

It appears that Nick Young's and JaVale McGee's team won the Championship: 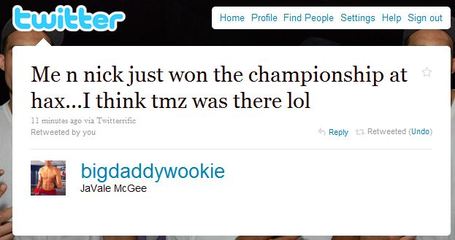