Share All sharing options for: Why John Wall's scoring numbers may be lower than you'd expect next season

I firmly expect John Wall will be next year's Rookie of the Year, just so we're clear.  Wall's impact goes far beyond how many points he scores.  He's going to be great at pushing the ball and setting people up from Day 1, and he should be an elite defensive player pretty quickly.  Voters will take note of all these things.

But in looking at the roster makeup, I think there's a very good chance Wall won't be scoring a ton of points next year.  This is in part because he still has areas of his game that need to be developed.  His jump shot, for example, is still a work in progress, and it wouldn't surprise me to see him play overly cautiously at times to avoid turning the ball over.

At the same time, I think the major reason Wall's points might be down have little to do with Wall himself and much more to do with three of Wall's fellow projected starters: Josh Howard, Andray Blatche and Gilbert Arenas.

Right now, those three players make up three-fifths of the Wizards' likely starting lineup next year.  They're all good players, and in the short term, there's a legitimate argument to be made that Wall should be leaning on them.  But regardless of where you stand on that discussion, it's impossibly to deny that those three are scorers, by any stretch of the imagination. And by "scorers," I mean they are high-usage players that like to create their own offense more than the average NBA player.

Defining a "high usage" player is pretty easy, because we have a stat for that called usage percentage.  I've used this one before, but if you're not familiar with the stat, it basically identifies how often a player ends a possession by his team while he's in the game.  Those actions include a missed shot, a turnover or a drawn foul.  The league average last year was 18.9%, according to Hoopdata.  Here's where Arenas, Howard and Blatche stand with that stat.

Blatche:
So clearly, these are three guys who complete far more possessions than the average player.  As a point of comparison, only one team - San Antonio - had three guys in the top 40 in the NBA in usage percentage last year.  All three of Arenas, Howard and Blatche have posted usage rates before that would have put them in the top 40 in the NBA last year.  Obviously, because of diminishing returns, that won't happen this year even if Wall wasn't around, but clearly, all three guys tend to end a lot of possessions.  You might be able to start three high-usage guys, but you certainly can't start four.  Wall's usage will therefore likely be pretty low even if all three do sacrifice shots as expected, which means fewer chances for him to score.
In addition, Wall may have fewer chances to create than it would seem.  Not only do Howard, Blatche and Arenas like to use a lot of possessions, but they have historically scored a lot of their points on their own.  There are a lot of ways to illustrate this.  For one, all three have traditionally had low assisted field goal numbers, i.e. the percentage of baskets they score that are assisted by someone else.
Here's a graph to help illustrate that which displays the percentage of assisted baskets for all three of those players recently.  (Note: for Howard and Blatche, Year 1 is 06/07, year 2 is 07/08, year 3 is 08/09 and year 4 is 09/10.  For Arenas, year 1 is 04/05, year 2 is 05/06, year 3 is 06/07 and year 4 is last year, because of his injuries).  The green line is the league average last year, which was 56.1 percent.
(Data via 82games and Hoopdata). 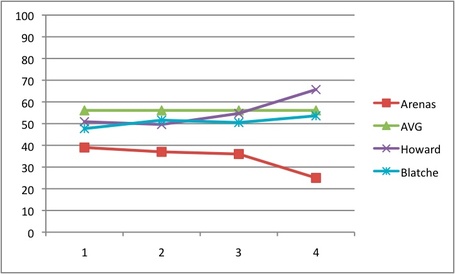 All three players have been below the league average for most of their careers, as you can see here.  Obviously, there are caveats to consider.  The league average is an aggregate number, and surely different positions have different averages.  For example, big men tend to have higher percentage-assisted numbers than point guards, which makes Blatche's low total all the more drastic.  And, of course, this is just one stat.  But it does tell you that all three are not the kind of players who will accept camping in the corner while Wall dribbles around for a while.

(A note on Arenas' numbers: as mentioned last year, Arenas' percentage-assisted numbers were actually above the league average for point guards prior to 2009/10.  However, they were far below the 08/09 average for shooting guards, the spot on the floor he'll likely spend more time playing next year).

There are more signs that all three players like creating their own offense.  According to Synergy Sports Technology, Howard was eighth in the NBA last year (with Dallas) on scoring efficiency on post-up opportunities, scoring an average of 1.11 points in those spots, and a brutal 316th in the NBA on scoring efficiency on spot-up jumpers.  He clearly seemed more comfortable when he got the ball with a chance to go to work.  Blatche, meanwhile, had over 40 percent of his possessions end in either a post-up or an isolation, and he finished 284th in the league in offensive efficiency on spot-up shots.  Finally, while Arenas' numbers were a bit skewed by the role Flip Saunders wanted him to play, a whopping 56 percent of his possessions ended in either a pick and roll or an isolation, compared to just 11.3 percent for spot-up shots.

Clearly, there are going to be adjustments made by both Wall and the Arenas/Howard/Blatche trio offensively.  Wall will have to sacrifice some control, and the Arenas/Howard/Blatche trio will have to learn how to score better off other players, or at least display those skills more often.  But practically speaking, we know that Wall will have to sacrifice some chances to put up numbers in order to keep Arenas, Howard and Blatche healthy, and that should limit his scoring a bit more than if he played with a bunch of low-usage players.