JaVale McGee logged just nine minutes in Team USA's scrimmage last night, but still managed to make quite an impression.  He scored six quick points right after he checked into the game, a stretch that ESPN's Chris Sheridan called "dominant."  McGee blocked a shot, got a dunk after sprinting the floor hard in transition, finished off a beautiful assist from Chauncey Billups, then hit a left-handed scoop shot off the glass as the shot clock expired (ironically, this happened right as Fran Fraschilla was commenting on McGee's lack of a left hand). His only other playing time came early in the third quarter, where he did very little and was taken out a little while after shooting a bad fadeaway jumper.

All in all, it was a nice stretch for JaVale. He finished with seven points, three rebounds and one blocked shot in his nine minutes, and probably outplayed teammate Brook Lopez, who finished with just two points and zero (yes, zero) rebounds in 13 minutes.  Lopez is struggling with mononucleosis, which provides even more incentive to keep JaVale around.  On the flip side, Tyson Chandler had an excellent scrimmage, with 13 points, nine rebounds and four blocked shots.  Chandler probably has the inside track on the center position for now, meaning McGee will have to continue to impress to make it over Lopez.

It still remains unlikely that McGee will actually play with the team in Turkey for the World Championships, but it appears he's done enough to at least earn a closer look.  Jerry Colangelo has said that he expects to keep all the big men on the roster for now, though he did slightly back off that declaration after the scrimmage.  With so many guards and so few bigs, I'd think McGee would be back even if it was just as another practice body, but I guess we'll see.  The cuts should be made by tomorrow night.

Whether McGee makes it or not, I still think this was a very positive experience for him.  I understand the risk that it all goes to his head, but I actually think the opposite effect will occur.  He'll realize just how hard one needs to work to be consistently great, and that can only be a positive.  Plus, where else will you get impromptu coaching from one of the best leaders in basketball? 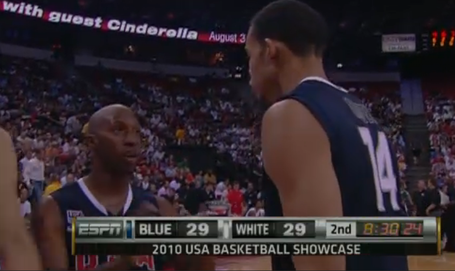 Reactions below the jump:

After the game, Colangelo was asked specifically about McGee and said, "He's young, but he does a couple of things that, in international ball, is giving him the benefit of the doubt. He can block some shots. He can rebound. He's young. He's learning. And so that's who he is. Finally, we have to determine whether or not we have space in the 15 to bring him to New York. And we haven't made that decision yet."

But it appears there is an argument that taking all three centers could keep somebody else from getting a longer look. In the biggest jeopardy among centers is McGee, even if he said, "I think I've got a good chance'' to make it to New York. McGee, who had seven points and three rebounds in nine minutes for the Blue, is still very raw.

Lopez was brutal Saturday, totaling two points and no rebounds for the Blue, but he would provide insurance in the low post if Chandler gets hurt, and Team USA officials are aware he's still working himself back in shape after a recent bout with mono.

Sheridan on who he guesses will be cut (McGee is listed sixth, meaning Sheridan thinks he'll make it):

The hard part about cutting him is they don't have anyone else like him - a jumping-jack 7-footer who can spell Tyson Chandler at center. And with Brook Lopez playing poorly while still recovering from mononucleosis, it's difficult to discard a big with a unique skill set.

4. JaVale McGee or Rajon Rondo - Tyson Chandler is clearly at the top of the center depth chart, but Colangelo has said that he would like to keep all three centers (Chandler, McGee and Brook Lopez) around. Still, after Saturday's game, he said "we have to determine whether or not we have space in the 15 to bring [McGee] to New York."

JaVale McGee may not be my favorite big on the roster, but he can run the damn floor. He was active in his nine-ish minutes, but my primary concerns still hold: McGee can look good against other teams that don't have legit centers (he was on the same team as Brook Lopez), but will he really be able to produce and defend against FIBA-caliber bigs?

McGee outplayed Lopez (who only scored two points and had one rebound in 16 minutes of play) in Saturday's scrimmage, though it's worth noting Lopez is still getting back to full strength after dealing with mononucleosis. Obviously, if Lopez isn't back to full strength, it helps McGee's chances of making the final squad, but he's in a good position regardless of Lopez's condition.

Team USA is really hurting at the center position this year, with most of the team's top players either skipping out or out due to injuries, so there's a chance McGee could make the USA roster even if he doesn't outplay Brook Lopez in the coming weeks.