Editor's Note: A different take on Hamady from CJHemp. I'm not wild about the guy myself, to be honest.

Seeing enough through mini-camp, practices, scrimmages and four Summer League games, the Wizards elected to rest both John Wall and JaVale McGee for its final Summer League matchup with the NY Knicks. This decision most directly benefited the playing time of Hamady N’Diaye, Kevin Palmer and Lester Hudson and enabled Hamady and Kevin to start. 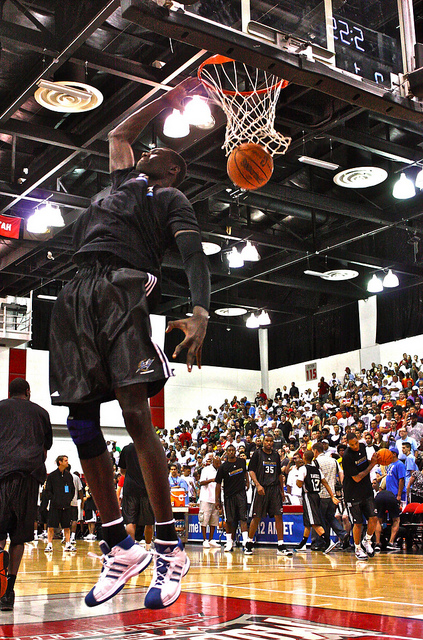 via Truth About It

Filling in for JaVale McGee, Hamady did not disappoint and in retrospect did some very positive things. In Hamady’s most extensive minutes in the Summer League (30:24) he was able to put up nine points on 3 of 5 (60%) shooting, he made 3 of 4 (75%) foul shots, grabbed 7 rebounds (including five defensive boards) and had four blocks. Most impressively he had a plus-minus ratio (measure of a player’s on-court impact) of +12.

What most impressed me about Hamady’s performance was that, when he was on the floor, there were long stretches when the Knicks virtually ceded the paint to him. During those stretches they often gave up driving into the paint and settled instead on shooting jump shots. And when the others on the floor turned up their defensive intensity, they suffocated the Knicks and were able to extend their lead to 20 points – extremely impressive considering there two most talented players were not playing. Unfortunately the Wizards were not able to hit shots in the 4th quarter, lost some of its defensive intensity and dramatically increased their number of turnovers all of which let the Knicks get back into the game and ultimately win by two in overtime.

The 7 foot 235 lbs. N’Diaye is clearly a work in progress that needs additional development. This is largely because he hasn’t been playing basketball since childhood – in that regard he is still a "relative" novice. However, it is important to remember that he played four years of Division 1 basketball (with four years of Division 1 coaching) and it is likely to believe that he will develop more quickly than a "1 and done" project with worlds of "potential" as he did have four years of major college coaching. It would also benefit Hamady greatly if he can add additional muscle, as 235 is a bit too light for a NBA Center – particularly in the more physical East.

It is nearly impossible to extrapolate what we saw in the Summer League, let alone one game in which he received extended minutes, but we will try anyway. While he was on the court, Hamady was an intimidating force in the paint. His timing on blocked shots appears to be better than JaVale’s in the sense that he does not go after pump fakes quickly leaving his feet. He was routinely in good position to rebound, particularly on the defensive board and routinely blocks out. In some respects, he is the opposite of JaVale and someday, could provide for a great 1 – 2 tandem in the paint.

Hamady may not have the freakish athleticism of JaVale (and few Centers in the NBA do), but even at this stage in his development Hamady appears to be much more grounded in the fundamentals of the position. Plus - dare I say it - he also seems to have a bit of "nastiness" in him. JaVale and Andray appear to be nice guys and they often play that way on the court. The Wizards, in Trevor Booker, Hamady N’Diaye and possibly Kevin Seraphin (we haven’t seen it yet) have added a few young players that are more physical in their approach to the game.

A bit of "nastiness" will be a welcome addition to the Wizards roster.