I know it is only the Summer League and we have only seen two Wizards games. However, tonight the ESPYs were on and I have refused to watch that mess since its inception. So as I was watching the Clippers and Sofoklis "Big Boy Schorts" Schortsanitis take on the Bulls, the thought hit me... what conclusions, if any, could we draw from the Wizards Summer Leagues stats so far? I know this sounds crazy, but hell I had some time on my hands. 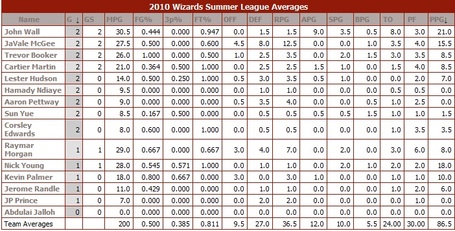 With three games left, it will be interesting to see if the distribution of minutes changes. Will some of the players who have not received as many minutes begin to see their time on the floor increase? Or has the coaching staff, between mini-camp, practices and scrimmages, seen enough from those players to know that increases are not warranted? Three games in the next three days should provide us with further evidence.