Share All sharing options for: Cartier Martin tries to seize his opportunity

You know how I could tell Cartier Martin was much more engaged that usual in yesterday's game against the Warriors? It all comes down to one play.

The play happened sometime late in the third quarter. The Warriors had the ball out of bounds, and Martin was guarding Jason Rich. Raymar Morgan was on Reggie Williams, the Warriors' high-scoring combo guard. Suddenly, as the play began, Martin began shouting at the top of his lungs. FIFTY FIVE DOWN! FIFTY FIVE DOWN. REGGIE'S COMING OFF!" In other words, he was calling out the Warriors' play before it happened.

This kind of thing happens on occasion in the NBA, when the players have been fed with all sorts of detailed team scouting reports. But in Summer League, there are no detailed scouting reports, no visual breakdowns of what a rag-tag group of random rookies and free-agent signings like to run. (Or, at the very least, those scouting reports are far briefer than what you see in the regular season).

And yet, there was Martin, calling out Golden State's play. It's not something I witnessed much from any team yesterday.

"If I'm on the backside and my [teammate's] up top, they can't see what's going on behind you. I have to communicate with them to let them know what's going on behind them, so [the other team doesn't] get an easy basket," Martin told me. "Calling out that play helps allow our big man to adjust to what's about to happen, not only so they can see the play, but so they're ready for what's behind them." 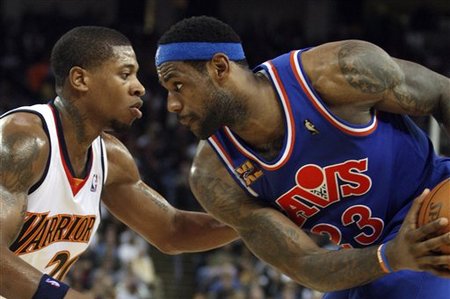 Martin won't admit it, but he has extra motivation this summer. After bringing him aboard at the end of last season, the Wizards have given him heavy minutes thus far in Summer League. The team also just so happens to have a major hole on the roster on the wing, with only Nick Young and Al Thornton there to occupy the big guard/small forward spot on the roster. There's a place on the team available for a player like Martin, and it certainly looks like he's doing everything he can to slide into it.

When I asked assistant coach Sam Cassell about Martin and his future with the team, he played it pretty coyly.

"We're looking at all our guys. Cartier happens to be one of our guys, so we're trying to see what he can bring to our team next year."

Martin, too, admitted that the Wizards haven't discussed any sort of long-term contract with him. But he also said that he really does want to play here.

"I don't know man. I don't know what's going on," he said when I asked if the Wizards had talked to him yet. "But I'm happy here and I think they're pretty comfortable with me. We haven't discussed any terms or anything, but I'm pretty confident about being here. Hopefully, they give me a chance and I can prove that I can play in the league."

If he does make it here, it's pretty clear it'll be because he hits open shots and plays good defense. His performance on the first front yesterday wasn't all that great, as he hit only two of his eight shots. He admitted that "I'm not too happy about the way I shot the ball." But he also said he's going to keep trying. He has a good stroke and was open for most of his shots; they just didn't go down.

To his credit, Martin didn't let his poor shooting detract from his effort elsewhere. As Cassell noted after the game, Martin is going to have to do more than make shots: he also has to be a "better defender, better communicator, the whole nine yards." Cassell added that he was encouraged by how Martin defended, and it's clear from talking to Martin that he takes a lot of pride on that end.

"I'm a longer guard and I'm a taller guard, and I'm guarding the two guard out there," he said. "So the main thing for me is to get into their space and make them do things they're not comfortable doing. Make them put it on the floor, pass the ball, etc. Go out there, be tough, be aggressive, and try to do what I can to make them adjust their shots."

He certainly made the effort yesterday. It's hard for me to say he excelled, because Reggie Williams did go off, but he certainly worked. He did an excellent job trailing screens, and while he did get beat off the dribble a couple times, he also was aggressive and very much in the face of Golden State's wings. And, of course, he was vocal. Very vocal.

Martin knows he's here to finish plays, not create them. When I ask him why so many players struggle to adjust to being a complimentary player, he simply said "that's part of the game. If you can't make that adjustment, they're going to find someone that can." He also knows how to play off John Wall, saying he's making an extra emphasis on running the floor and finding space to spot up for open shots. So at the very least, he knows what this team needs.

Obviously, it remains to be seen if Martin is good enough to ultimately fill that role. But if he is able to continue to fulfill the coaches' wishes to the best of his ability, he will become more than simply the guy who filled a roster spot after the Alonzo Gee saga.