Editor's Note, by Rook6980: With only 2 days left before the Draft, and lots of prospects left to preview, I'm accelerating things a bit. I promised a flurry of activity the week of the draft - so here it comes.

Draft prospects in this preview:

Previews after the jump. 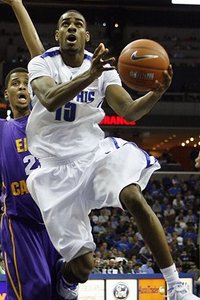 Williams is a bit undersized (6′4″) for a shooting guard in the NBA, but he is a superior perimeter talent with explosive speed and quickness. Left handed, with a quick first step, Williams can get to the basket where he finishes very well, even in traffic. He's a better three-point shooter than his numbers indicate (36.6%), especially with his feet set on a catch-and-shoot. He needs to work on his mid-range jump shot, as it is not as consistent as it needs to be.

Williams all the tools to be elite defender, but it remains to be seen whether he can become a point guard and run a team, or will he be an undersized two.

Even though he falls within the Wizards draft range, I don't think he fits in with the team. He reminds me too much of a left-handed Randy Foye. 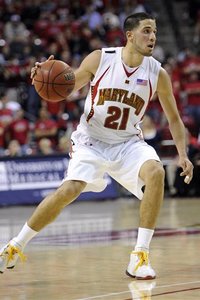 Vasquez has great size for a point guard, measuring 6’6.5" at the Combine. That, coupled with his outstanding individual workouts, where he is shooting the lights out and showing better than expected athleticism, has Vasquez's draft stock rising. Since the first week in June, when individual team workouts started, his draft status has sky rocketed (from Mid-Second round) - and now he is a borderline first round pick.

There is a lot to be impressed with, other than his size. He was an inconsistent shooter in college, but has apparently been knocking down everything in workouts. He was always an efficient and highly productive player. He's got great court awareness and is a natural leader. That along with his aggressiveness and competitiveness should bode well for him in the NBA.

As for fit with the Wizards, I actually think Greivis could work in Washington in a backup guard rotation IF Shaun Livingston is not retained. I like his toughness and his basketball IQ. I like his three-point shooting touch. I think he could be dangerous in the pick-and-roll game. I'd love to see the Wizards pick him up if he falls to the second round.  (I still like Pondexter better at pick #30) 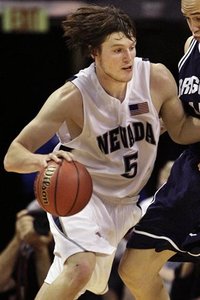 Luke Babbit is a big (6'9"), smooth, left-handed small forward with a deadly mid-range jump shot and NBA three-point range. He is equally adept at shooting off the dribble, off the pass, or off a screen. His size and wingspan (6-11.25") make him difficult to guard on the perimeter; and he can post up as well. He is an excellent finisher in transition, a strong rebounder and an elite free-throw shooter (92%).

Defense is where he will have to improve. He is intense and aggressive, spending energy and effort on the defensive end, but his lack of quickness and so-so atlheticism hurt. He will have difficulties guarding quicker small forwards in the NBA.

Babbitt is the classic tweener forward. He creates match-up problems on offense, because at 6'9" he can post up, but also shoot from deep. He handles the ball like a guard, but has the length to be effective inside. Defensively is where that match-up problem reverses itself. Who does Babbitt guard? He is not big enough, or strong enough to guard NBA power forwards, but his less than average lateral quickness and speed means he cannot guard most NBA small forwards.

My guess is that he'll end up as a NBA small forward, and the team that drafts him will have to hope his offensive skill is enough to offset his defensive deficiencies.