Editor's Note, by Rook6980: With only 2 days left before the Draft, and lots of prospects left to preview, I'm going to accelerate things a bit. I promised a flurry of activity the week of the draft - so here it comes.

Draft prospects in this preview:

Previews after the jump. 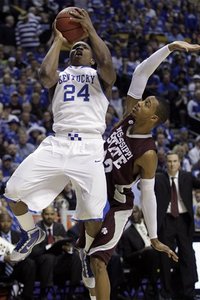 Eric Bledsoe played at Kentucky with John Wall. He is a super quick guard with a high basketball IQ. Playing off the ball next to Wall last season, Bledsoe didn't get the chance to show off his point guard skills; but be assured, he is a very good pass-first PG. He needs to work on his ball handling and cut down on his turnovers, and he also needs a lot of work on his jump shot.

The team that drafts Bledsoe should be willing to wait for his development. He won't be able to step right in and run the point, but given time, he could develop into a very good one. Not the Wizards, of course, but just about any other team could use a young point guard to groom. 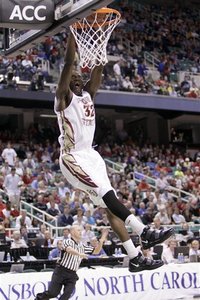 Solomon Alabi is a tremendous physical specimen. Standing 7'1" in shoes with a 7'5" wingspan, he reminds one of a young Dikembe Motombo. Offensively, he can do little more than catch-and-dunk or shoot a baby hook shot. Alabi is a decent free-throw shooter (79%) so there may be hope for a pick-and-pop game.

Defensively is where Alabi will make his living. He is effective in protecting the post, where he can block shots while defending one-on-one, rotating to help on the weak side or just contesting jumpers around the lane. Rebounding is a concern, though. You'd like to see more than 9.2 rebounds (per 40 pace adjusted) from your defensive-minded center.

Alabi is the type of player that Ernie Grunfeld loves to draft. Extremely long, athletic players that run the floor well and have explosive jumping ability. Alabi blocks shots and can defend the rim. But since the Wizards already have JaVale McGee, I think the Wizards should pass if they get a pick in the high teens/early twenties as has been rumored. 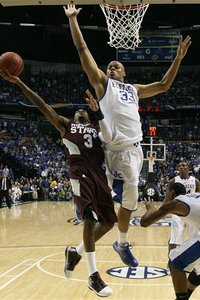 Orton has great size and strength for an NBA Center. Standing at 6'10", 269 pounds with a 7'4" wingspan, Daniel Orton certainly looks the part of NBA Center.  Orton has nice touch around basket, but needs to develop some moves in the post. Remember, he only played 13 minutes per game as a freshman at Kentucky. And for that, NBA scouts are droling over him.

Personally, I don't see the attraction in drafting a guy that played a total of 501 minutes (about 14 games worth of minutes) simply because he is big and has some upside. He also has a number of red flags, like his balky knee, his 13.8% body fat, the fact he has practically no offensive game, the fact that he's an abysmal free throw shooter (52.4%) and the reality that he struggles guarding the pick-and-roll (an NBA staple).

Daniel Orton really needed another year at Kentucky as the starter, out from underneath Demarcus Cousins' shadow. Personally, I don't see the appeal of drafting Orton so high, but to see him ranked in the middle of the first round on most mock drafts says that there are a lot of people that see his potential. The team that drafts Orton may have to wait three or four years for him to develop. If he fell to the Wizards at pick number 30, I'd be happy taking him, but he's not worth a pick in the teens.