Every year, Bullets Forever staff members gather and evaluate the job each player on the team did during the season. However, since 2009/10 was a pretty historic year, we figured it was time to change up the format as a way of commemorating the wackiness of what we just witnessed. We'll do a different player every day around lunchtime, so check back then. Today: Mike Miller.

Make the jump for some analysis, some humor, some foreshadowing and a chance to grade Mike Miller on a scale of 1-10 in the comments section.

Mike Miller is such an enigma that by the end of the year, I was more frustrated with him than any other player on the roster. That's probably completely unfair, but such is the deal with Miller. He's a player that spurs extreme reactions because he'll shift from extreme styles of play.

What do I mean? There will be some short bursts where Miller is trigger-happy and constantly trying to score. It happens rarely, but it did happen on occasion this year. There was that game against the Knicks where he was raining threes, and there was that early-season game against Miami, before he hurt his shoulder, when he played aggressively through pain and nearly brought us back from a large deficit. After each of those games, and other games in which he was more aggressive than usual, Miller would talk about how he always "picks his spots," and how this game dictated him being aggressive.

But those games were too few and far between. Too often, we saw Miller pass up open shots, try to make highlight passes, not attack the hoop off the dribble and drift out of the game altogether. It was the same Miller that Timberwolves fans learned to loathe as well.

But as I said at the top, Miller spurs extreme reactions, and early in the season, I, like many others, was overjoyed with his play. When Miller played with the Big 3, his style of play was a welcome change and complement to their style. As Gilbert Arenas and Caron Butler fought for attention, you never had to worry about giving Mike Miller shots. As Antawn Jamison jacked up a ton of looks, and as Brendan Haywood tried to show off his improved mid-range game, Miller just filled in the blanks. It was all fine and dandy ... until those guys left and Miller failed to show off all the other gifts in his game.

You read that right: "gifts." Clearly, Miller's strength is his jump shot, but he is capable of running screen and roll, delivering good passes and rebounding. Very few players can do all of those things well - Miller can. The problem is that he really can't juggle all those skills at once, which is the real way featured players separate themselves from role players. Role players give up that quest and focus on doing a couple of things really well. Featured players find a way to do them all at the opportune moment. Miller seems to fancy himself as a "featured" player, but whenever he tries, he ends up just being passive. Again, sometimes a team needs a passive guy like Miller, but only teams that have tons of scorers already. For most other teams, they need one or the other. They don't need guys still trying to figure out how to impact the game the right way.

If this reads as a harsh critique of Miller, it's only because I think he's really capable of being an essential piece on a great team. In a way, I have higher expectations for him after watching him show off all the things he can do. But there's clearly a mental block that prevents him from doing all those things, and it's manifested itself in each of the last two years. It's not the kind of mental block you'd normally see in a player, but it's a mental block nonetheless. I hope whoever signs him this summer finds a way to break it.

A limerick to sum up Mike Miller's season

His game is a lot like his hair
Gritty, with unusual flair
Great outside touch
Doesn't shoot much
So passive it's almost unfair

Hey Mike, you mind doing this in games more often?

A player Mike Miller should emulate 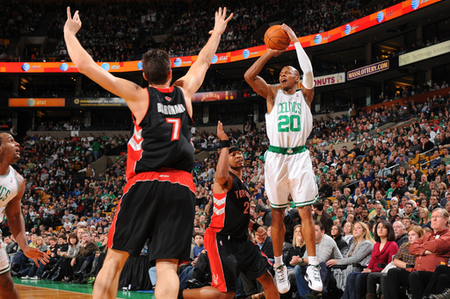 Who should Mike Miller emulate? How about a guy that never passes up an open shot: Ray Allen.

Surprisingly, when I looked at the shooting stats for Allen and Miller, they are very similar.

Mike Miller completely shocked me with how good he is this season. I knew he was a great shooter (and awful defender) before joining the Wiz, but had no idea that he was this good of a passer. He had an odd season, as his job was supposed be complementing Gil by being an outside shooter and good passer. Once our season went down the port-a-john, however, he often found himself running the offense, a role that he was supposed to support, not occupy.

Miller had a great season though, showcasing an incredible ability to fit in with almost any team by seamlessly moving from shooter to distributor. I recall that he had a positive +/- rate until pretty late in the season, which is amazing on such an abysmal team. By win shares/48 minutes, which removes the injuries from his season, this was Miller's best season since he was 25, four years ago.

So where does he go now? He is a pretty unique player, as someone who is great at shooting and passing, and awful at D, so it is hard to determine exactly what his niche is on a team. Just look at the numbers Mike ran last summer on possible backcourt partners for Gil; Miller's profile is unlike that of all the other players. As much as I've enjoyed watching him play this year, there is no way he is back with the Wiz next year as we go with younger players.

Miller clearly has value to a contender, at least as an outside shooting option, but his late career tendency to spend more time distributing than shooting is problematic. On the Wizards, Miller ran our offense, but on a contending team, there will be star players to handle the distributing/initiating duties, so Miller's passing abilities will not be as needed. These star players will enjoy Miller's ability to stretch a defense and loathe his inability to guard anyone.

Miller is certainly capable of being a sharpshooter off of the bench, but I think Miller can start on the right contending team, one that is looking for a glue guy at SG and not a high volume scorer. The Spurs come to mind as a team needing some long range shooting that could live with his defense, and I also think Utah and Chicago could be fits as well.

His odd profile is part of the reason it is hard to find a fit, and likely why he has spent his career playing on bad teams. Will he have to forget passing and be just a shooter? Is his passing so good that he will be given a significant initiation role despite not being a primary ball handler or scorer? Having seen Miller for an extended period this year, I am absolutely fascinated as to where his career goes, and hope he finds a starting role on a contending team that can take full advantage of his skills as soon as next year.

Taking all factors into account (expectations, performance, salary, etc.), how would you rate Mike Miller's season on a scale of 1-10, with 1 being Juan Dixon bad and 10 being OMG TEH BEST SEASON EVAH? Post your grade in the comments.