Editor's Note, by rook6980: This is the 14th installment in a series of regular postings on Draft Prospects.  This series will take a look at the top draft prospects for the 2010 NBA Draft in June. The plan is to have one or two a week, leading up to a flurry of activity the week of the draft. My DVR is crammed full of College games, and I'm watching and writing as fast as I can.

Larry Sanders has made amazing progress in his three years at VCU, going from an unheralded high school player to a shoo-in first round pick in the NBA Draft this coming June.

Sanders didn't start playing basketball until 11th grade. His high school coach spotted this long-armed 6'6" kid walking down the halls and practically had to beg him to join the team. He really didn't like basketball. He had tried playing on the local courts, but "I was 6-6 and I couldn't dribble or shoot," he said. "I didn't like it." But what he found out was that basketball was more than just dribbling and shooting, and he loved the other things (defense, blocking shots, rebounding). But still, he was incredibly raw. How raw? In his first game, he started off the second half by scoring in the opponent’s basket. He didn't know that teams change baskets at halftime.

He was barely recruited out of high school and didn't have a single offer from a BCS-affiliated program. Some of those programs are now kicking themselves; after seeing the tremendous strides Sanders has made at VCU.

Find out more about Larry Sanders after the jump.

Larry Sanders is a physical freak. He stands 6’10" in shoes and he has a 7’7" wingspan an a 9-foot, 3-inch standing reach). Let me let that sink in. That's almost unbelievable. He can stretch out his arms and his hands would be in different zip codes. Georghe Muresan had a wingspan of 7'10", but he was 7'7" tall.

Aside from his incredible length, Sanders is an excellent athlete with explosive, quick leaping ability. He is also very agile and coordinated. Everything he does looks smooth and effortless. He is also one of the fastest players I've seen this year - and I will be very interested to see his sprint and agility times at the NBA Combine. At only 220 pounds, Sanders lacks strength and bulk, but he has a good frame and should have no trouble getting to 240 or 250 within a few years without sacrificing his athleticism.

Offensively, Sanders has made tremendous strides during his three seasons at VCU. When he first got to VCU, he could do little more than catch the ball a few feet from the basket and dunk. Since then, he's become a more prolific and efficient scorer, and he's worked hard on some basic post moves. Although his post game is still raw, and he lacks the lower body strength to hold position, he can still score in the post because of the amazing extension he gets with those long arms around the rim. Very similar to JaVale McGee in that respect.

His footwork still needs work, but he has a nice spin move (to the right), to finish with a baby hook. I also saw games where a couple of times he went left, and finished with a short fade away jumper.  He's also shown a nice drop step; and occasionally he finishes with his left - showing at least a little variety to his post offense.

This past season, Sanders became the focal point of the offense after Eric Maynor left to become a member of the OKC Thunder. He was much more aggressive this year, especially going to the basket. Because of his slight frame, he sometimes had trouble finishing at the rim, but he got to the free-throw line at a good clip (7.1 per 40 minutes). He made very good strides in improving his free throw shooting (from 45% his Freshman season to 64% in his Junior season).

His jump shot, while not a featured part of his game, is solid. He shows good form, with a high release. He squares his body well, and gets great extension. More time to polish that mid-range jumper can only help to further diversify his game.

While he will never be an offensive go-to guy, comparisons to Ben Wallace are a bit unfair. I think that there is some untapped offensive potential in Sanders game. Specifically, if he can continue to work on that jump shot, he could become a threat in the pick-and-roll and pick-and-pop game.

On defense, his slight frame again makes it difficult for him to hold his position, and he gets pushed around by bigger, stronger players. However, that great quick leaping ability and those long arms help to mitigate that shortcoming somewhat (4.4 blocks per 40). Sanders is an active defender, quick enough to switch onto guards on the perimeter.

Sanders is an excellent rebounder, pulling down an impressive 13.6 (per 40 minutes). He uses his physical assets to best use when he's rebounding: whether it's out jumping someone for the ball, using his long arms to reach over someone, or just out-quicking an opponent to the ball. He needs to work on his fundamentals (finding his man, boxing out, etc.), because he will find out quickly at the next level that he won't be able to rely ONLY on his physical gifts to snare rebounds in the NBA.

He has excellent foot speed and lateral quickness. Those qualities, combined with his height, length, quick leaping ability and the fact that he plays hard on the defensive end means he should develop into a solid defender in the NBA.

So while the game is very new to him, he has drastically improved every year and has tons of upside. Where he can help a team immediately is with his ability to run the court and finish.  Sanders is one of those guys who makes everything look easy.

But having said all that, the key for Larry Sanders is where he lands in the Draft. If he goes to a patient team that will allow him a few years to develop, he should turn into a very nice player. If he lands with a team that requires immediate production - they will be sorely disappointed. 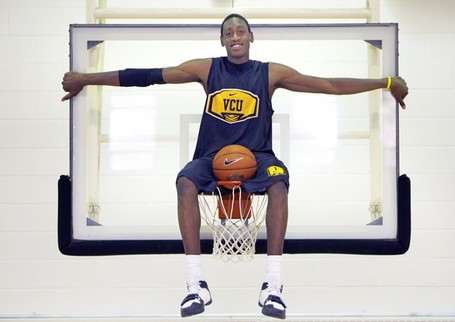