Every year, Bullets Forever staff members gather and evaluate the job each player on the team did during the season. However, since 2009/10 was a pretty historic year, we figured it was time to change up the format as a way of commemorating the wackiness of what we just witnessed. We'll do a different player every day around lunchtime, so check back then. Today: Randy Fore.

Make the jump for some analysis, some humor, some foreshadowing and a chance to grade Randy Foye on a scale of 1-10 in the comments section.

I was always lukewarm about Randy Foye's inclusion in that draft-day trade last year. All along, I saw legitimate utility for Mike Miller because of his versatility, but Foye struck me as a redundant piece. He wasn't really a point guard, and we had so many guys at shooting guard in front of him that I wasn't sure how he'd get his minutes. I warmed up to him over the summer, but that was on the condition that he would occupy a role that played to his strengths.

And, well, that didn't really happen. Foye is a wonderful human being with great drive, but I think there were times this year when he was a little too proud about his own game. Flip Saunders rode him hard, especially after Gilbert Arenas' suspension, and Foye cracked at times. Then, despite being replaced by Shaun Livingston later in the year, Foye continued to insist, edgily, that he was a point guard. I get the sense that he still hasn't quite realized that his meal ticket in this league is to be a complimentary player. He tried to adjust, sure, but it's tough to do so when you've been anointed a star for your previous franchise.

It's also tough when your role gets jerked around by your coach so much. To be fair to Foye, Saunders didn't really do him many favors. Saunders was confused about what to do with Foye all through training camp. He talked a lot about hoping to play Foye with Arenas, but still spent most of training camp playing Foye at the backup point guard spot. When asked about it, Saunders said he wanted Foye to learn how to be a point guard in his system before he tried playing them together. It sort of made sense, and early on, Foye played well doing both things. But then Foye turned an ankle, and when he came back, Flip banished him to the bench in favor of Earl Boykins, who evidently was more of a point guard than Foye. Foye was not a great fit as a point guard, but he was much better than Earl Boykins, so Foye had a legitimate gripe there. He then was immediately elevated to starter status after the suspension, where he did okay until Shaun Livingston took his job. That's one hell of a yo-yo sequence.

At the same time, this is part of the problem with a guy like Foye. He's the size of most point guards, but he lacks point guard instincts. He's very proficient spotting up for jumpers off ball screens, but he can't drive and finish, and those pull up jumpers are not particularly great shots anyway. He is potentially an excellent spot-up shooter, but he's too small to play off the ball consistently. So really, where do you slot him? It's tough for any coach to figure that out.

If Foye was a better player, this wouldn't be as much of an issue, but he's really not much better than mediocre at this point. His Synergy stats show someone who isn't terrible at anything, but also doesn't have one thing he does particularly well. Maybe if he accepts a role of an instant-offense bench guy - a mini-Jamal Crawford, if you will - he'd catch on somewhere, but he first needs to shed the Fourth Quarter Foye reputation he unfairly gained in Minnesota, and that won't go away easily.

There exists a team that will find a role for Foye and make him into a decent player. That team is not the Washington Wizards. It wasn't the Wizards last year, and it definitely isn't the Wizards this year. If the Wizards are smart, they forget the qualifying offer and cast him aside so he can catch on with a different team. Slotting him into this uncertain mix would just be wasting resources.

A limerick to sum up Randy Foye's season

Twas an interesting season for Foye
The one who brings children joy
At times he was sneaky
But more often, streaky
A shame he's measured by Roy

Jon L posted this video earlier this week, but we have to feature it again. Who knew Randy Foye could act?

A player Randy Foye should emulate 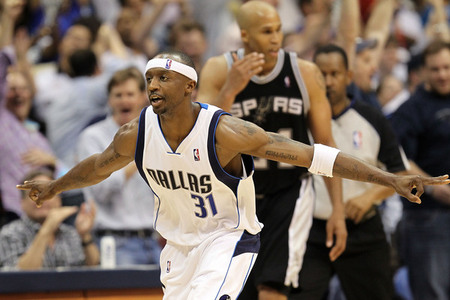 Randy Foye should emulate another smallish Shooting Guard, Jason Terry. Like Foye, Terry was forced to try to become a Point Guard..... but he has a scoring mentality.

Both Foye and Terry are excellent shooters from off the dribble, or from spot up positions. Both are excellent on pick and roll plays - and both are good 3-point shooters.

Forget about trying to be a Point Guard - embrace your inner Shooting Guard; like Jason Terry did. Do more of the things you are good at, like shooting 3's, or pulling up for a jumper out of a pick-and-roll... and spend less time doing things that bring down your efficiency - like driving to the basket, or trying to force passes.

You'll never be a starter, so concentrate on being the best 6th man.

Randy Foye is quite possibly my most hated member of the team this season (after Gil). Why? Foye represents the awful trade that gave away our 5th pick for mediocrity. He blocked my main man Nick Young at guard, didn't show any type of improvement/performance that would show he was a nice swipe by Grunfeld and was not traded for a young(er) player or draft pick at the deadline.

I wasn't a big fan of his coming out of college, and still am not a fan after four years in the league. He is entering his age-27 season, and although he has shown some modest improvement, Foye has not consistently performed as a pure PG and isn't quite good enough as a SG. His lack of an elite skill makes his upside just a third guard, although some team may think he still has the potential to be a good starter thanks to his high draft position and his early run of good play this season.

The Wiz can extend a qualifying offer to Foye for a cool $4.8 million, and may end up keeping him for another year, but I just don't see the point in clogging up the backcourt with a 27 year-old who is still trying to find his way. As Truth About It said, however, Grunfeld may extend the qualifying offer to retain some value from the summer trade I wish not to remember. Even though Foye is a class act off the court, the Wiz will be better-off with Foye's minutes going to younger players who might be with the team for more than onemore season, so it would be best for both Foye and the Wiz if he gets a multi-year deal from another team.

Taking all factors into account (expectations, performance, salary, etc.), how would you rate Randy Foye's season on a scale of 1-10, with 1 being Juan Dixon bad and 10 being OMG TEH BEST SEASON EVAH? Post your grade in the comments.