Every year, Bullets Forever staff members gather and evaluate the job each player on the team did during the season. However, since 2009/10 was a pretty historic year, we figured it was time to change up the format as a way of commemorating the wackiness of what we just witnessed. We'll do a different player every day around lunchtime, so check back then. Today: JaVale McGee.


Make the jump for some analysis, some humor, some foreshadowing and a chance to grade JaVale McGee on a scale of 1-10 in the comments section.

It's no secret that the Wizards weren't all that thrilled with JaVale McGee entering training camp. He had put on some weight, but not nearly as much as the coaching staff wanted. Meanwhile, he was not in good enough physical condition to properly withstand the grind of training camp. As I wrote back then, the praise the coaching staff was heaping on Andray Blatche and Nick Young wasn't being heaped on JaVale McGee, and some of his teammates, especially Brendan Haywood, sounded a bit fed up with him.

The vast majority of the regular season wasn't very good for JaVale McGee either. Saunders didn't trust him much, especially after a mid-December game against Indiana when he didn't run toward the basket to receive a lob with less than 0.3 seconds left. Blatche ended up taking most of the backup center minutes behind Brendan Haywood, and McGee got buried on the bench. It wasn't exactly the kind of development we were hoping for with him this season, that's for sure.

But after the trades, McGee played much better, especially once Saunders elected to use him in a sixth-man role. It eventually came out that McGee has a form of asthma, and either the Wizards didn't know about it for a while or were unsure about how to manage it. I don't want to speculate too much either way, since it's a bit unclear, but regardless, that probably explains how McGee sometimes looks lethargic out there. In the end, Saunders settled on having him come off the bench, and he played much, much better. His numbers improved incrementally from February to April, and he made some strides on his biggest weaknesses: post defense and stamina.

So in the end, it wasn't all bad. But McGee still has a lot of work to do to become a functional rotation player. His offensive Synergy stats read like a player who doesn't realize what he is good at. He should be getting all his points on rebounds, cuts and pick and roll opportunities, not in isolation or on spot-up shots. He can blame the Wizards' crappy point guards for the lack of pick and rolls, but he has nobody but himself to blame for the other stuff. Saunders pulled him repeatedly for taking bad shots, so hopefully that will reign him in next year. Defensively, he's still terrible when being posted up, so he has to get stronger right from the start. He came into training camp far too light last year, and that can't happen again.

At the end of the day, McGee is a young big man with a ton of upside, so he's too valuable to give up. At the same time, he also needs to have the experience of fighting for his starting spot. The Wizards shouldn't hesitate to add interior help for next season if they can do so in a cost-effective way. They didn't want to add another big this spring because they wanted McGee and Blatche to get as much experience as possible, which is defensible. But experience time is over. It's time for McGee to really earn his place in this team's future.

There really aren't any excuses anymore, especially not with John Wall in town. Here's hoping McGee makes that jump.

A limerick to sum up JaVale McGee's season

Well, that was an interesting academic study of Iron Man, I guess.

A player JaVale McGee should emulate 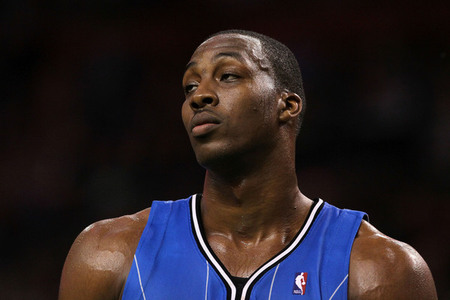 Sorry, I cannot help it. I still think McGee should try to emulate Dwight Howard.

Howard came into the eague as a skinny center and concentrated on defense, rebounding and building up his body. His offense is still a work in progress, but no one can deny that Howard has done a magnificent job learning how to defend and rebound. Not to mention the fact that he's now probably one of the strongest players in the League.

It will take years for JaVale to pack on the muscle, but in the mean time, he should concentrate on being the best defender and rebounder he can be. Let the offense come off the offensive boards, on the break and on those pretty alley-oop plays.

Epic Vale is an interesting case. I honestly hated him as a draft pick out of college, because I felt he was "just another big man with upside who can't play." McGee doesn't always appear to be doing anything special, but metrics love him, with his PER being high for two years. The four players most similar to McGee at his age coming into this season, via Basketball Prospectus' book, were Andray Blatche, Al Jefferson, Jermaine O'Neal, and Tyrus Thomas, which is not too shabby.

With Brendan Haywood gone, the question now is whether Javale can perform as well with significantly increased playing time (such as Blatche, O'Neal, and Jefferson) and be more than just an energy guy off of the bench (like Tyrus Thomas). He appears to have improved slightly from his rookie year, but we are all hoping for a bigger jump. The Wiz, meanwhile, might be wise to proactively give him an extension while his cost is relatively low.

Taking all factors into account (expectations, performance, salary, etc.), how would you rate JaVale McGee's season on a scale of 1-10, with 1 being Juan Dixon bad and 10 being OMG TEH BEST SEASON EVAH? Post your grade in the comments.