Every year, Bullets Forever staff members gather and evaluate the job each player on the team did during the season. However, since 2009/10 was a pretty historic year, we figured it was time to change up the format as a way of commemorating the wackiness of what we just witnessed. We'll do a different player every day around lunchtime, so check back then. Today: Nick Young.

Contract Status: Under contract for $2.6 million next year

Make the jump for some analysis, some humor, some foreshadowing and a chance to grade Nick Young on a scale of 1-10 in the comments section.

Nick Young made strides this season. It took a while, but he made strides. That's a good thing.

And boy, did it take a while. In training camp, Young looked like the darkhorse poised to steal the starting shooting guard spot from the other veterans. Instead, he ended up at the end of the bench, and when he did play, he was terrible. It looked like he was trying to do a million things at once, and he ended up forcing way too much on the offensive end. It was a repeat of previous years, when Young spent way too much time freelancing for contested mid-range jumpers. Eventually, because of all the injuries, he went back into the starting lineup, where he played relatively well - at least until he got benched again.

I, along with many others, was ready to give up on Nick Young at that time. Nick's fundamental problem was the same one he had his rookie year. For some reason, he couldn't play consistently off the bench. When he hit his first shot, he tended to play well, but when he didn't, the rest of his game suffered. The Wizards' coaching staff, in particular Flip Saunders, probably overstated this effect to the point where Nick probably lost chances he might have deserved, but at the same time, the knock on Nick, to a large degree, was true. Throw that issue into the ever-continuing problem of Nick breaking offensive plays, and it was tough to see his upside.

But Young turned in an excellent April, scoring 17 a game on 45 percent shooting and 44 percent shooting from three. Sure, it helped that he was getting 35 minutes a game as a starter, but he just seemed much more comfortable. The presence of Shaun Livingston probably helped, as did the confidence the coaching staff had in him, but we finally saw a Nick Young that had adopted Flip Saunders' lessons. He was coming off screens. He was spotting up in corners and moving to the right spot. He wasn't breaking too many plays. Best of all, his defensive effort was consistent, even when his shot wasn't. It was a really good sign going forward, that's for sure.

All in all, I'm encouraged by Nick's season. The biggest thing that impressed me was how much less freelancing he did. If you look at those Synergy stats closely, you'll see that Nick had more spot-up shot attempts (190) than pick and roll and isolation attempts combined (186). In addition, for a guy who admitted during Summer League that he didn't really know how to come off screens, he was pretty efficient in those spots. It's possible it just took Flip and company a long time to break him down before they built him back up. Saunders was asking Young to adjust his game pretty heavily, and sometimes, that takes time. Maybe that lightbulb really came on by the end of the year.

At the same time, I need to see it for longer to really be excited about Nick. As we noted in the 2008 evaluation, Nick closed his rookie year strongly as well, and that momentum didn't continue into 2008/09. Nick will have his chances next year, whether it's as a starter or a reserve (a significant distinction). I hope he shows what he showed in April over the course of a full season, but it's going to be a challenge. His role is going to get changed a lot, and he's going to have to adjust. Such is life when you have his kind of game.

I'm rooting for you, kid. Show me my faith is justified.

A limerick to sum up Nick Young's season

This is the trailer for Second Chance Season, the documentary about Nick in high school. Every time you're frustrated with the kid, watch this and think about how far he's had to come to even get here.

A player Nick Young should emulate 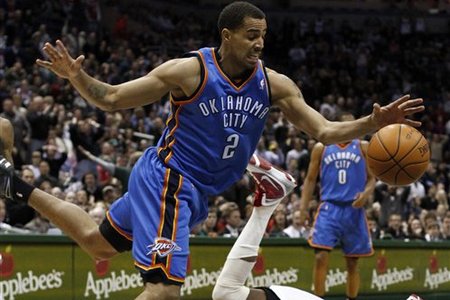 We all know that Nick Young can put the ball in the basket. Last year, after waiting for almost three years, we saw a glimmer that Nickmight actually WANT to play some defense. He's got all the tools: height, super long arms, lateral quickness, large hands, vertical explosion, quick feet, etc.

So I think he should emulate another wiry 6'7" quick, athletic shooting guard with great tools for defense. A guy that put those tools to work, along with discipline, desire and intensity to become a very, very good defender. A guy like Thabo Sefolosha, who was named to the NBA 2010 All Defensive second team.

A sound defender with excellent tools. Long arms, quick feet, and good discipline make him adept at getting in the passing lanes. Doesn't take too many risks, but still forces quite a few turnovers. Displays good awareness when defending off the ball. Shows good recovery speed and the ability to contest shots with his wingspan. Good option in one-on-one situations though more powerful players can cause problems for him. Rebounds the ball extremely well on the defensive end. Very smart defender who knows when to give space and when to take it away. Plays with intensity and fits the perimeter stopper role that every team likes to have.

I have a big theory on my main man, aka Young Sushi. Nick entered his third season needing to prove that he can be a legitimate contributor on an NBA team, and looked certain to do so after a great preseason. After the hype though, he really just continued to do more of the same, teasing us with talent and not really appearing to improve much. As much as Nick likes his nickname, he should realize that he is running out of time to prove himself, and should not relish in the fact that he is raw (like sushi). "Not-SoYoung Sushi" would probably be more appropriate at this point.

The bright side is that everyone misjudges Nick as a potential offensive force and defensive catastrophe; but everyone would be completely wrong. Despite appearing lazy and careless, Nick is actually an excellent defender. He limits his opponents, and the Wizard team defense improves when he is on the court. Look closely at him during a game, and you will see that he is terrific against small athletic players and big strong players (the tweeners give him a bit of trouble, such as Hedo Turkoglu). He certainly has offensive talent, but despite the occasional scoring outburst, he has given three years of inefficient offense where he misses too many shots and never passes. I actually think that of all the current members of the team, he has the clearest path to a defined role on a great team, as a defensive energy guy off of the bench - think Trevor Ariza. Nick should abandon any fantasies he has of being a volume scorer and instead try to be more efficient with lower usage on the offensive end. He needs to realize that defense is his meal ticket.

Unfortunately for Nick, not only does he not seem to realize where his talents lie, but the Wizards don't either. The Wizards did give him another year to prove himself, and he will likely have a lot of opportunities on a rebuilding team, I just wonder whether they will be the right type of opportunities.

Taking all factors into account (expectations, performance, salary, etc.), how would you rate Nick Young's season on a scale of 1-10, with 1 being Juan Dixon bad and 10 being OMG TEH BEST SEASON EVAH? Post your grade in the comments.