Every year, Bullets Forever staff members gather and evaluate the job each player on the team did during the season. However, since 2009/10 was a pretty historic year, we figured it was time to change up the format as a way of commemorating the wackiness of what we just witnessed. We'll do a different player every day around lunchtime, so check back then. Today: James Singleton.

Make the jump for some analysis, some humor, some foreshadowing and a chance to grade James Singleton on a scale of 1-10 in the comments section.

When the Dallas trade first happened, I distinctly remember khrabb telling everyone "just wait, you'll love this Singleton guy." I can't dig up the original comment, but I can say this to you, khrabb: you were right. Singleton evolved into one of my favorite players on the team, and the "Big Game James" nickname, which started as a way to get me through what seemed like a dreadful last half-season, became a real rallying cry. (Shameless plug: buy the T-shirt).

Singleton took over the energy/hustle role that Darius Songaila once had, and did so immediately. Singleton never possessed Songaila's shooting touch, but his rebounding was outstanding, and his post defense was excellent despite being undersized. The weird thing about it is that Singleton was more of a stretch four type in Dallas, except he never played because his shooting touch wasn't there. Once he came to DC, he really attacked the offensive glass (13.5% OREB%, compared to 9.4% in Dallas) and also became a much better defensive player. It's almost as if he saw his niche immediately and filled it.

But what impressed me most about him was his demeanor in the locker room. I know, I know, I make fun of people who talk about this stuff, but Singleton really showed me a lot in this regard while I had access. He immediately became a leader, encouraging players and talking to them during workouts even though he just got here. He became a mentor figure for Andray Blatche in a way that was much more significant than Antawn Jamison ever was. The two had their locker next to each other, and both guys talked about how much the other meant to them. Why was this able to happen so quickly? My theory is that Singleton, unlike Jamison, is pretty light-hearted. He's a practical jokester, as this video proves, and he always manages to have a smile on his face, as opposed to Jamison, who rarely was smiling by the end of his tenure here. At the same time, he understands when to get serious, considering the long road he's taken to get here. Because of that, I think Blatche felt more of a connection to him, as opposed to Jamison, who was so different that Blatche couldn't relate to him. Either way, it wasn't hard to see Singleton's affect on Blatche, and JaVale McGee for that matter.

I realize these are exactly the kind of guys you can't overpay, so I'm not going to say the Wizards should re-sign Singelton at all costs. That jumper has to get better - it was really dreadful this season - and he is already 28. But while I wouldn't say re-signing Singleton is as big a priority as, say, Livingston, I think the Wizards would be wise to keep Big Game James around. Prudently, of course.

A limerick to sum up James Singleton's season

I like this because it was an awesome play. I like it more because I hate J.R. Smith's game.

A player James Singleton should emulate 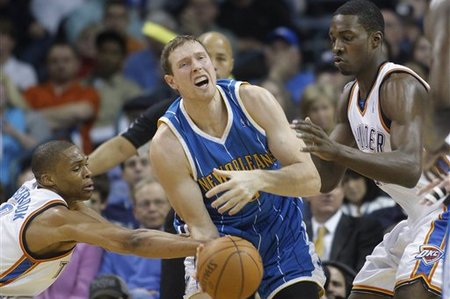 Now, I know you're saying. "Wait a minute Rook, are you crazy? Darius Songaila can't jump, can't rebound, and is slow footed on defense. Why would you want Singleton to emulate him?"

Well - you're right... I don't want him to emulate EVERYTHING Songaila does; just that gorgeous mid-range jump shot. And really, only his jumper on the pick-and-pop and spot-up situations. Songaila was nearly automatic from mid-range when he had room and had his feet set.

Singleton is a good free throw shooter (84%), and his mechanics are sound - so there's no reason he can't improve on a very pedestrian 34.2% shooting percentage on mid-range jumpers (stats courtesy of Synergy).

Over 30% of the plays Singleton had last year resulted in Pick-and-pop and spot-up jump shots, usually from mid-range. He needs to become more efficient there. I absolutely love the rest of his game, so he doesn't need to change much else; but the poor shooting from mid-range brought his overall efficiency way down.

A general rule in the NBA is that you want to have at least one great skill upon which you can hang your hat. You won't last long in the NBA if you can't find a niche and are a 'jack of all trades and master of none'.

Singleton has certainly found his niche, and there should be several teams interested in his services this summer. Even a rebuilding team can use a gritty, defensive-minded rebounder to at least inspire the youth, so I have no problem with him playing another year in DC. Singleton will likely, however, be looking to parlay his nice season into a multi-year deal, which is unlikely to be offered by the Wiz. He may also be looking to join a contending team, and thanks to his efforts in DC, likely in a better role than the nonexistant one he had in Dallas.

Therefore, it's tough to predict where Singleton he will land, as contending teams may only offer a one-year deal, and teams in 'less attractive situations' may try to up the ante slightly with more money or years. Personally, I lean slightly towards a reserve role on a playoff team (aka not the Wizards).

Taking all factors into account (expectations, performance, salary, etc.), how would you rate James Singleton's season on a scale of 1-10, with 1 being Juan Dixon bad and 10 being OMG TEH BEST SEASON EVAH? Post your grade in the comments.