Every year, Bullets Forever staff members gather and evaluate the job each player on the team did during the season. However, since 2009/10 was a pretty historic year, we figured it was time to change up the format as a way of commemorating the wackiness of what we just witnessed. We'll do a different player every day around lunchtime, so check back then. Today: Fabricio Oberto.

Make the jump for some analysis, some humor, some foreshadowing and a chance to grade Fabricio Oberto on a scale of 1-10 in the comments section.

I was relatively optimistic about signing Fabricio Oberto this summer, even though I knew getting him over DeJuan Blair was probably not smart. That optimism, however, faded on the first day of training camp (or maybe it was media day, I can't remember), when Oberto essentially admitted he hadn't worked out very much all summer because he was still recovering from his heart ailment. At that point, I had a bad feeling the Wizards just wasted $2 million.

I don't hold this against Oberto, to be clear. We're talking about a very serious injury, and requires taking it easy for a while. So don't get me wrong, this isn't his fault. And sure, the Wizards doctors checked him out and said he was okay. The problem, though, is that management clearly didn't take into account the residual effect his heart issue would have on his playing condition. He just wasn't in good enough game shape to make a difference, until possibly the very end of the season when he moved back into the starting lineup.

It was clear very early on that Oberto was working from behind. During training camp, he sat out several scrimmages and a couple preseason games with little, nagging injuries. The Wizards sold it as a typical move to rest a veteran player in training camp, but of all the non-injured players, only Gilbert Arenas sat out more preseason scrimmages than Oberto. He started the season in the starting lineup with the injury to Antawn Jamison, but rarely played extended minutes because he fouled at a prodigious rate (6.7 fouls/36 minutes). It's easy to explain why he fouled so much: he was just too slow to stay with people. He was being beat to the glass all the time and was a step slow on too many defensive rotations. Hence, all the fouls.

Eventually, he then sat out a ton of games until he reemerged as a starter at the very end of the season, when he played more like the guy Ernie Grunfeld must have envisioned signing. You saw glimpses of the kinds of things Oberto was supposed to bring to the table. He was a high-IQ player who made nice cuts off the ball, as evidenced by his efficient scoring in those spots. He was a very good passer as well, and still managed to lay some wood on people. And, of course, despite his conditioning issues, if Synergy is to be believed, he was one of the better isolation defenders in the league (though I have been told Derek Fisher is #1 in that category, so take it for what you will).

(On another note: I'm not quite sure what type of effect Oberto had on our young bigs, because I didn't see them talking as much as I expected in the locker room. I'm sure he helped in ways I missed (i.e. the practice court), but it did seem like it was James Singleton more than Oberto, that became the mentor figure to Andray Blatche and JaVale McGee. That's just my sense though).

The bottom line, though, is that it took Oberto at least half the season to get back into a basketball rhythm following his heart ailment last year, and for a guy brought in to be a veteran piece on a one-year contract, that's a bit of an issue. It's not Oberto's problem, it's the Wizards'. They should have seen this coming. And as much as I appreciate Oberto's calm demeanor and his honesty (after the last game of the year, he said point blank that the team never came together), I can't help but wonder how we could have spent that $2 million more wisely.

A limerick to sum up Fabricio Oberto's season

He was always ready to go
In everything, Fab was a pro
Wiser than owls
Good for six fouls
If only he wasn't so slow

This play is from 2008. I wonder if Nick and Fab practiced that play at some point this season.

A player Fabricio Oberto should emulate 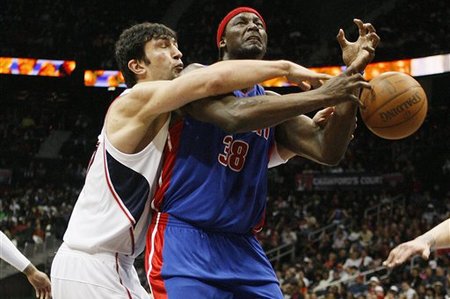 Or maybe he should emulate Juan Carlos Navarro, and go play ball in Europe. Perhaps there's a European team that can use a slow footed big man that can't shoot, can't rebound and averages 7.3 fouls per 40 minutes.

Hey, at least the Spurs didn't win a title and make him completely feel like an ass for joining the circus in DC...

The guy is 35, and although his TS% ticked upward this year, his other rates have almost all fallen steadily downward from a peak three years ago. San Antonio signed Theo Ratliff(!) over him last year, and he did nothing this season to make the Spurs regret letting him walk. I think he still has a place in the league as a grinder off the bench, just not on the Wizards, who will be looking for younger talent or guys better known for their leadership and mentoring abilities.

Taking all factors into account (expectations, performance, salary, etc.), how would you rate Fabricio Oberto's season on a scale of 1-10, with 1 being Juan Dixon bad and 10 being OMG TEH BEST SEASON EVAH? Post your grade in the comments.