Every year, Bullets Forever staff members gather and evaluate the job each player on the team did during the season. However, since 2009/10 was a pretty historic year, we figured it was time to change up the format as a way of commemorating the wackiness of what we just witnessed. We'll do a different player every day around lunchtime, so check back then. Today: Quinton Ross.

Make the jump for some analysis, some humor, some foreshadowing and a chance to grade Quinton Ross on a scale of 1-10 in the comments section.

Quinton Ross came to DC as a throw-in to the trade with the Mavericks, and was essentially treated like a throw-in. Which was appropriate. Ross was used sparingly as a way to motivate Nick Young, and I think it worked. That was probably the right way to use him.

The book on Quinton Ross isn't anything new. He's a good individual defender that can't shoot and really can't do anything else offensively. His defensive stats, via Synergy, were very good with the Wizards. He's quick, cuts off angles well and contests shots extremely well. He was probably a better defender back in the day with the Clippers, but he's still pretty solid. And for a team that hadn't always committed to defense, Ross was, at the very least, a nice example.

Unfortunately, his offense is painfully terrible. Back in the day, he could at least hit an open jumper? Now? He can't. Those efficiency stats on spot-up jumpers are dreadful, and every time he was on the court, the Wizards were playing four on five. One of the problems is that Ross is reluctant to shoot threes, preferring instead to take a step in and hit long twos. Obviously, this is the worst shot in basketball, so his efficiency stats are accordingly awful. By the end of the year, Flip Saunders was using him in very specific situations to mask his awful offense.

But going back to that first paragraph, we really couldn't expect anything more from Ross. If Ross' commitment to defense rubbed off on Nick Young even a little bit, he exceeded my expectations. He's under contract for another year, which is fine by me as long as he's not stealing too many minutes from better players.

A limerick to sum up Quinton Ross' season

Defensively, Q is still good
Defends like a role player should
He lacks shooting touch
He doesn't score much
He'd fix up those things if he could

Yes, there's actually a Quinton Ross mix out there. No, it doesn't include any clips from this season. Yes, this is still ridiculous.

A player Quinton Ross should emulate 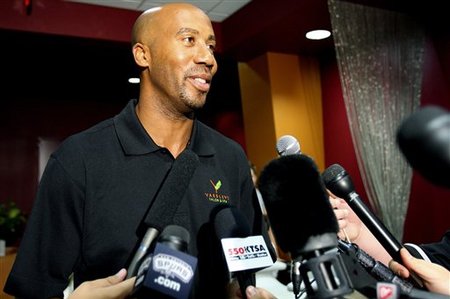 Many of the better teams in the NBA have what is called a "defensive stopper" on their rosters. Someone who can be counted on every night to defend the other team's best player. Most of those guys emulated Bruce Bowen. Quinton Ross should do the same.

Other than a trade exception, Ross had minimal value to the Wiz this year, which is saying a lot. He had a bunch of DNPs and provided little of anything when he did play. He did, however, provide fuel for one of the more ridiculousquotes of the year from Ernie Grunfeld

"Quinton can play both the shooting guard and small forward positions while providing athleticism and outside shooting."

Well, Ernie was right in that Ross did play SG and SF, and I'll give him athletic (which isn't saying much for a professional athlete), but outside shooting?!? Ross was 3-13 on the season from beyond the arc at that point, and managed to shoot 1-8 while with the Wiz. He was a decent defender and three-point shooter as recently as two years ago, but those days appear gone and his time in the NBA is fading fast. Some team will likely kick the tires to see if he has anything left in the tank, but the metrics are not optimistic about his chances of hanging around.

Taking all factors into account (expectations, performance, salary, etc.), how would you rate Quinton Ross' season on a scale of 1-10, with 1 being Juan Dixon bad and 10 being OMG TEH BEST SEASON EVAH? Post your grade in the comments.