Every year, Bullets Forever staff members gather and evaluate the job each player on the team did during the season. However, since 2009/10 was a pretty historic year, we figured it was time to change up the format as a way of commemorating the wackiness of what we just witnessed. We'll do a different player every day around lunchtime, so check back then. Today: Cartier Martin.

Make the jump for some analysis, some humor, some foreshadowing and a chance to grade Cartier Martin on a scale of 1-10 in the comments section.

I'll honestly admit that I really didn't give Cartier Martin much of a chance this season. I was still fed up with the Alonzo Gee saga, and since Martin replaced Gee on the roster, he already had two strikes against him in my eyes. I always viewed Martin in comparison to Gee, and that wasn't fair to Martin because he simply wasn't as good or as promising as Gee.

Surprisingly, though, Martin wasn't that bad as a member of the Wizards. He showed that he at least had a decent jumper, and while his defensive numbers from Synergy aren't very good, he did show a lot of fight on that end. The one thing you can definitely say about Martin is that he gave it his all out there. He made nice, hard cuts to open spots, crashed the boards on both ends and ran the floor nicely. I think a lot of that can be reflected in his 23% usage rate, which was significantly higher than in any of his previous NBA stops. Martin saw that this was his chance to showcase himself to all 30 NBA teams and made sure to take advantage of it in his activity.

The problem, though, is that I don't see any unique skill Martin brings to the table. He took a lot of spot-up jumpers, but was dreadfully inefficient (one point per possession) on them. His defensive stats are pretty bad in every situation, though the sample size is pretty small. He's not really a high flyer, and his dribbling really needs some work. I guess he could recast himself into a corner-three-and-defense guy, but so could 20 other wings floating on the fringes of the NBA. The odds of him doing it over all those other guys are pretty slim.

Jon has the perfect description of Martin in his section below, and I won't spoil it here, but that's pretty much how I feel about Martin. He's a nice guy that I hope finds a place in the league, but based on what I saw during his Wizards tenure, I don't see where he'd fit. He was roster filler that got pressed into duty when Al Thornton got hurt, and as much as he tried, I don't think he showed enough to stick.

A limerick to sum up Cartier Martin's season

A player Cartier Martin should emulate 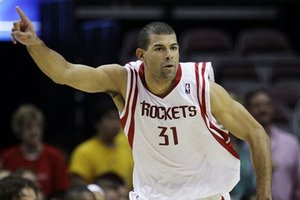 Cartier Martin is a decent perimeter defender with a 3-point shot. Definitely he should emulate Shane Battier, and try to become a lock-down type defender. Cartier has a bit better slashing game than Battier, but if he could really clamp down on defense and hit 3-pointers at a decent clip, he could have a solid career in the NBA.

Much like Cedric Jackson, there were some nice offensive flashes, but he is a swingman who has shot 37.5% from the floor in 51 career games, put up three assists per 48 minutes last season, is a below-average defender and has yet to finagle a sponsorship deal from Cartier, the jeweler. He appears to have dominated the D-League and Europe though, so he's what would be called a 'AAAA-player' in baseball. He's too good for the NBA Developmental League, but not good enough for the NBA. Given that he is 25 and has limited upside, he will not be back with the Wiz next year. He will continue to live on 10 day contracts, trying to convince some team that he is worth that "permanent" 12th man spot.

Taking all factors into account (expectations, performance, salary, etc.), how would you rate Cartier Martin's season on a scale of 1-10, with 1 being Juan Dixon bad and 10 being OMG TEH BEST SEASON EVAH? Post your grade in the comments.