Every year, Bullets Forever staff members gather and evaluate the job each player on the team did during the season. However, since 2009/10 was a pretty historic year, we figured it was time to change up the format as a way of commemorating the wackiness of what we just witnessed. We'll do a different player every day around lunchtime, so check back then. Today: Cedric Jackson.

Make the jump for some analysis, some humor, some foreshadowing and a chance to grade everyone on a scale of 1-10 in the comments section.

Cedric Jackson probably deserved more of a look than he got this season. That's partly a function of how bad Earl Boykins was, but Jackson proved he could play a bit in Game 82 against Indiana. With nothing to lose, why not trot him out as the backup point guard for a few minutes? That way, we'd have more of a leg to stand on when trying to evaluate him. Unfortunately, the Wizards saw Jackson more as cheap roster filler than as someone who could actually play.

For the most part, Jackson was on the roster merely to be another practice player. That makes it tough to judge him, because his primary utility came in times we couldn't see. In theory, he should be a good practice player, because he always played hard and certainly had reason to, considering he was playing for an NBA future. But I honestly don't know how he did there. There's also the fact that, well, NBA teams don't practice all that much, especially late in the season.

As far as the games, Jackson's best moments came on defense. He was quick, aggressive and tough, guarding many point guards for the full 94 feet. His Synergy stats can't be trusted, because there's such a small sample, but they do show that Jackson did a good job limiting opposing point guards. If he's to make it in the league, that has to be his bread and butter, especially nowadays where the rules make it basically impossible to stop the quickest point guards.

It also has to be his bread and butter because Jackson was dreadful offensively. Like many point guards who can't make it, he dribbles too much, going nowhere aimlessly. His jumper was suspect, and he didn't exactly do a great job of hanging onto the ball. In 39 minutes this season, Jackson committed eight turnovers, or roughly one every five minutes. That's pretty terrible. And while most young point guards grow out of their turnover problems, Jackson is already 24. There's not much time for him to improve his ability to take care of the ball.

All in all, as good as Jackson can be on defense, his offensive issues really tip the scale against him. There are tons of D-League point guards out there, and Jackson didn't do enough to separate him from the pack. But hey, if we get the number one pick with the fifth-most ping-pong odds, he'll become a hero for his performance against Indiana. Gotta stay positive here.

A limerick to sum up Cedric Jackson's season

In college, his shot brought him fame
As a pro, lost only one game
A prospect in theory
Called up from Erie
Staying in town is his aim

Unfortunately, no video exists of Cedric Jackson's random explosion in Game 82 against the Pacers, so we're going to have to settle for this full-court buzzer beater Jackson hit to beat Syracuse back when Jackson was still in college. Gilbert Arenas would be proud.

A player Cedric Jackson should emulate 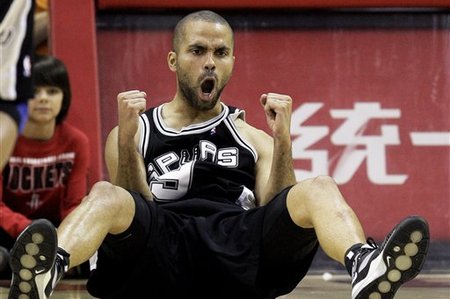 Cedric Jackson has some NBA tools. He's lightning quick, with a quick first step. He's got good ball handling skills, he can get to the rim and he's excellent at finishing around the basket. He's a scoring point that can play disruptive defense.

So who would I suggest he try to emulate? Kyle said something about Jackson in an article on Truthaboutit.net.

Matt Hubert of Blog Talk Bayhawk (which covers Jackson's D-League team) once told Michael A. De Leon of the blog Project Spurs that Jackson's game is, "very similar to Tony Parker's in that he uses his speed to drive to the basket and finish over bigger defenders."

I agree wholeheartedly and cannot think of a player that would be better for Jackson to emulate.

Cedric should study Tony Parker to learn to hit those little running floaters in the lane. Learn the drive and kick game. Etc. Most importantly, Cedric needs to improve is his outside jumper. Tony Parker's jumper was streaky when he first came into the league, but through constant work, he's become a much more consistent shooter. Cedric needs to get in the gym and shoot jumpers until his fingertips bleed.

He only played in 4 games during his 10 day contract with the Wizards, but scored eight points in under six minutes and hit a 'big' three-pointer in the final game of the season. Unfortunately for Jackson, those 5 1/2 minutes will likely go down as the highlight of his career, as it is hard not to see him back in the NBA D-League next season. He will definitely get a look again for some more 10 day contracts. As Danny Granger put it after those 5 1/2 glorious minutes, "That little guard, I don't even know his name. No. 9, down the stretch, he was pretty good."

Too bad for Jackson that undersized, high usage players are not what NBA teams look for from the D-League, usually opting for the low usage, high energy type.

Taking all factors into account (expectations, performance, salary, etc.), how would you rate Cedric Jackson's season on a scale of 1-10, with 1 being Juan Dixon bad and 10 being OMG TEH BEST SEASON EVAH? Post your grade in the comments.