Editor's Note, by rook6980:  This is the fifth installment in what I expect to be a regular posting on draft prospects.  This series will take a look at the top draft prospects for the 2010 NBA Draft in June. The plan is to have one or two a week, leading up to a flurry of activity the week of the draft. My DVR is crammed full of College games, and I'm watching and writing as fast as I can (between Wizards games).

Just another note: These draft prospect articles are not necessarily done in any order ... but rather their order is based on which college games I've had time to watch and analyze; and which ones my editor (Mike Prada) thinks may be particularly pertinent at the time.

Wake Forest forward Al-Farouq Aminu has already declared for the NBA draft and will hire an agent, thereby ending his college career. Aminu is descended from a line of Nigerian kings.  His name Al-Farouq means "the chief has arrived." His older brother Alade Aminu had a short cup of coffee with the Wizards on their Summer League team and was playing in the D-League before being called up this week by the Miami Heat.

Like his older brother, Al-Farouq has a terrific combination of length and athleticism, sporting a 7'2" wingspan and explosive jumping ability. Even though he went back to Wake Forest for his sophomore year, he is still younger (19-years old) than a lot of the freshmen in this draft. That extra year of college experience made him a more polished, NBA ready player. Still, at 6'9" and only 210 pounds, Aminu needs to put on some weight if he expects to bang inside in the NBA. He's got a solid frame, and should be able to put on 20-30 pounds of muscle without hampering his freakish athleticism.

Aminu has extremely quick moves in the post and on the wing, leaving most (slower) college bigs standing flat footed after he's already blown past them. He's great in transition, using his speed, quickness and jumping ability to full advantage in often ending plays with a spectacular dunk. At Wake Forest, he was asked to play multiple positions in his freshman year, but as a sophomore, he mostly played at power forward.

Aminu has a nice face-up game, with an extremely quick first step for a big man. He can usually blow by his opponent. Where he sometimes gets into trouble is when there's a second defender. This is where his lack of bulk and strength hurts, as he sometimes has trouble finishing in traffic. Aminu has a very nice jump hook which he uses in the lane. He has also shown some nice spin and pivot moves around the basket. Although he has a fairly high turnover rate (3.8 per 40 minutes), added strength might also help him in that area. He certainly doesn't shy away from contact, and is aggressive around the basket. As a result, he draws his fair share of fouls (6.8 FTA per 40 minutes). It would help his scoring average if he would improve his free throw percentage (69.8%).

Aminu's ball handling skills are still just average. He can beat his man with that teriffic first step, but unless he has a clear lane to the rim, he has difficulty manuvering his way through traffic, usually ending up in a turnover. He's also pretty bad at pulling up for the jumper.

Speaking of Aminu's jump shot, or rather the lack thereof: he has not shown much in the way of any consistency, hitting only 27% of his three-point shots. That is up from an abysmal 17% from his freshman year. He can't make a jump shot off the dribble (I didn't see him make one all year), and he's almost as bad in catch-and-shoot situations. He gets good height, and keeps the ball high, but his mechanics look off, with his elbow out to the side and the ball hand not centered on the ball. Someone needs to completely deconstruct his shot and have him start over with more fundamentally sound mechanics. 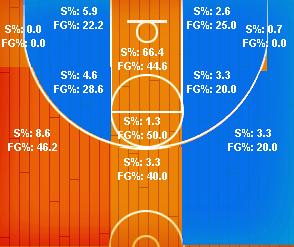 As you can see from his Wake Forest career shot chart (courtesy scacchoops), more than 66% of his shots came in the immediate basket area, where he made a pedestrian 44.6% of those shots. As I've already stated, adding some weight and strength should help him finish better around the rim. But take him away from the area around the basket, and he fares much worse. Anything further than a few feet from the basket is a crapshoot. Fortunately, Aminu seems to understand where he is most effective and he does not take a lot of mid-range or long two-point shots.

Where Aminu does excel is in rebounding the basketball. Both offensively (5.5 per 40 minutes) and on the defensive side (8.2 per 40 minutes), Aminu has established himself as one of the best rebounding forwards in the draft. Here is where he uses good fundamentals to maximize his physical advantages (length and athleticism). He finds a man and puts his body on him, establishes good position with a wide base, then explodes to the ball with two hands. (That's called boxing out, for those Wizards fans who are unfamiliar with it considering how rarely we saw it before the arrival of James Singleton). He gets a lot of his points off put-backs and dunks where his work on the offensive glass pays off in points in the paint.

Defensively, and especially on the perimeter and in pick-and-roll situations, Aminu's physical tools really stand out. He is extremely quick and able to play both forward positions. He's got good footwork and establishes a sound defensive stance. He's aggressive and puts forth a lot of effort on the defensive end. He's quick enough to stay in front of even the quickest guards - and almost impossible to shoot OVER, because of his length and jumping ability. He can switch onto any player at any position and hold his own. Obviously, his slight frame makes it difficult for him to hold position in the post against bigger players, but his length helps make up for that deficiency because he's still extremely difficult to shoot over, even for an opponent's big man. His quickness allows him to play perimeter players tight, and he rarely gets beat off the dribble. In the rare occasions when he does get beat, he's quick enough, fast enough and long enough to still block the shot from behind.

WEAKNESSES:
- Needs to add strength / bulk
- Poor Jump shot mechanics
- Turnover prone around the basket
- Needs to improve ball handling
- Poor 3-point shooting percentages
- Can not shoot off the dribble
- Poor shooter off catch-and-shoot
- all right.....he's just a poor shooter all around

All reports indicate that Al-Farouq Aminu is a terrific kid with a huge basketball upside. He's coachable, has a tenacious work ethic, gives back to the community and seems to be a genuinely nice kid. He did have a bit of trouble when he was 16, when he and some friends were arrested for aggravated assault and trespassing for shooting a car window with a BB gun from a vehicle. Aminu was granted first offender status because he had no prior criminal history. He was given three-years probation with 120 hours of  community service. His record was wiped clean after he complied with the terms of his sentence.

Since then, between Wake basketball games, and his college class work, he's been working at his brother Alade's Foundation. The Brotherhood of the World is a foundation created as a volunteer program specifically focused on underprivileged youths and children. It's rare that you find teenagers willing to give up a sizable amount of their time to give back to their community. So I think we can file the whole BB gun incident as a relatively minor "boys will be boys" thing.

Whichever team drafts Aminu will get an energetic, focused athlete with some NBA ready skills (transition offense, terrific defender, great rebounder). Obviously, until he can diversify his offensive game by fixing his jump shot and adding some weight, a faster paced team that likes to run would benefit more from his services than a squad with a "grind it out", half court style of play. Right out of the gate, he can be a high energy guy that runs the floor, defends, rebounds and blocks shots, like Chris Anderson in Denver.