Need something to wear for big games?

Share All sharing options for: Need something to wear for big games?

No Wizard embodies the spirit of the new roster better than James Singleton.  Don't believe me?  Let's see how he fits within the team's new identity.

In the days following last month's roster-altering trades, Mike began calling Singleton "Big Game James" after coming up with big play after big play to help the Wizards win their first two games after the roster shuffle.  Sure, the nickname isn't entirely original, but it captures Singleton, and buzz he has helped bring the team quite well.

To commemorate James Singleton's contributions to the team, we would like to introduce the latest addition to the Bullets Forever store: 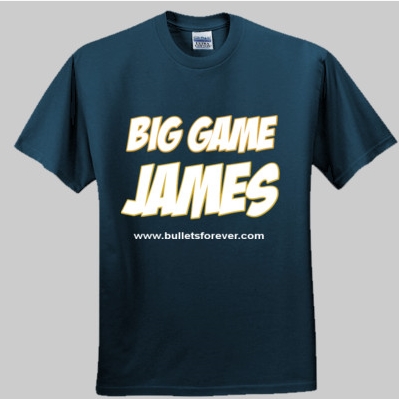 You can purchase the shirt here in a variety of blues for $15.99 plus shipping & handling.  We promise if you buy a shirt we won't break into your room and leave your mattress in the shower.