Flip Saunders: Andray Blatche taken out because he "didn't want to be coached"

Share All sharing options for: Flip Saunders: Andray Blatche taken out because he "didn't want to be coached"

Flip Saunders' decision to bench Andray Blatche for the majority of tonight's game stemmed from a disagreement in which Blatche said he didn't want to play after Saunders took him to task for not getting back on defense, the coach told reporters after the game.

Saunders said he took Blatche out of the game for not getting back in a transition sequence, forcing Mike Miller to pick up Blatche's man.  Blatche took issue to Saunders' treatment, after which Saunders said if he didn't want to be coached, he wouldn't play.  According to Saunders, Blatche said he didn't want to play and repeated the phrase when assistant coaches approached him three different times.

"In my fifteen years [of coaching], I've never seen anything like it," Saunders said.  "I'm more disappointed in him that I've ever been with a player in my coaching career."

Blatche had left the locker room by the time reporters came in.

When asked whether Blatche would play in tomorrow's game against the Pacers, Saunders said "I would doubt it right now.  I don't know, but I would doubt it," adding that Blatche will certainly be disciplined.

It's unclear which play Saunders is referencing, but it occurred early in the first quarter.  Blatche was visibly absent from team huddles the rest of the game, often staring into the stands instead of into the huddle.

"He can be pissed at me, but you never leave your teammates hanging out to dry like that, no matter what, especially when you've lost 11 games in a row and have a chance to win a game," Saunders said. "Uncalled for."

Nick Young told reporters that he spoke to Blatche to try to calm him down, but it didn't work.

"I don't know what really happened, but it's a disappointing situation from both ends because we really could have used Dray tonight," Young said.  "I told him, 'You're playing well.  You don't want to mess it up.  It's your opportunity to go out there and keep playing and don't worry about distractions.  You got to man up sometimes.'"

Al Thornton, James Singleton, Shaun Livingston and Randy Foye declined comment when asked about the incident, except to say that the team could have used Blatche down the stretch.

Saunders raised his voice several times during the press conference, responding in the affirmative when asked whether this was the low point of the season for him.

"Coaches aren't wrong, no matter what.  When a coach wants to teach you something, and you think you're above that because you've played, what, 16 games?"

"Right now, [with] those teammates, he's lost his credibility, that ability to be in the trenches.  What's going to happen when things go bad?  You just can't do those things," Saunders said.

"If you don't want to be coached, you're in the wrong spot," he added.

Ironically, the Wizards have distributed sheets of paper advocating for Blatche as the league's Most Improved Player in the media room.  Here's a copy. 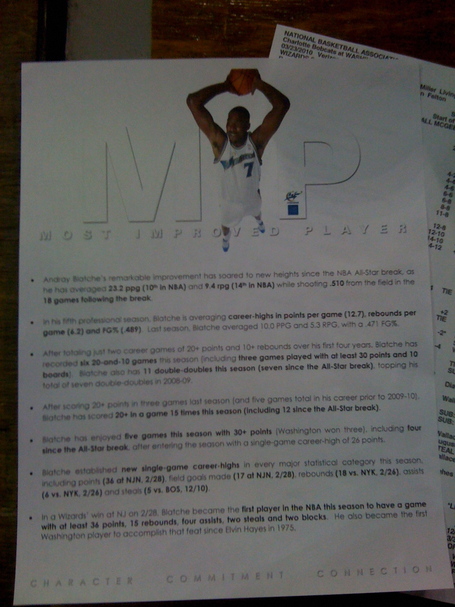