Share All sharing options for: Wizards hosed again on a non-traveling call

Wizards fans are particularly sensitive when it comes to end of game plays. We've seen what seems like an inordinate number of calls go against our team for the last six years; and traveling seems to be the one non-call that is prevalent in our history.

Most recent is the non-call in Portland, as Brandon Roy hit the game winning shot. Dave, of BlazersEdge ( an excellent SB Nation blog), said it "may have been a travel". Others have speculated that the Referees just didn't see it, perhaps paying attention to the clock, or something else. And of course, the Referees could, if necessary, check instant replay to see if Roy's feet were behind the 3-point line, or if he got the shot off before the buzzer - but they cannot check the replay for a travel.

Why the big deal? After the break, we can look at the last play, step by step, and then in real time. I'll discuss why I think the League's rules on instant replay are too narrow.

So we all saw the game, and the winning shot. Alonzo Gee played very good defense against Roy in the last seconds. But Roy used a veteran step back to try to gain some space, Gee was right there.... Roy had no choice but to either wait for Gee to go by, or step inside him. Trouble is, he had already picked up his dribble. 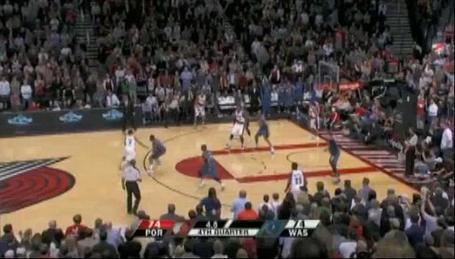 Here we see Brandon Roy making his initial move against the Rookie Gee. Note that there are only 4.5 seconds left. 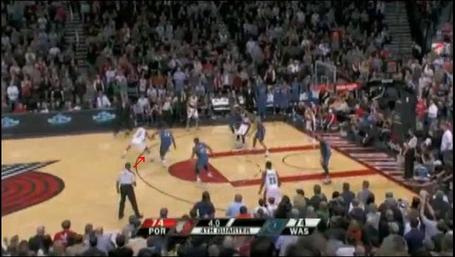 In this picture, you can see Roy has picked up his dribble, and is making a jab step in preparation for a step back jumper. The referee is in excellent position to see the play, Alonzo Gee's defense AND Roy's feet. 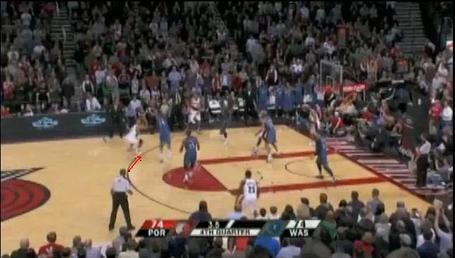 In this shot, you can see Brandon Roy gives a pump fake. Alonzo Gee bites, and goes up to defend. Notice that both Roy's feet are clearly either behind, or right on the 3-point line - and that the Referee seems to be looking directly at Roy's feet; presumably to make the call whether it's a 3-point shot or not. 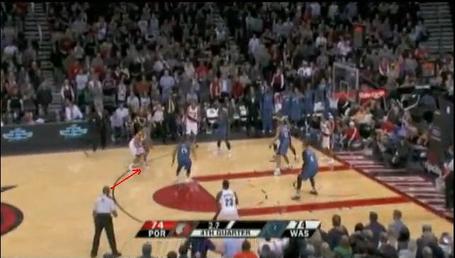 In this picture, you can see that Brandon Roy has taken two more steps - as both feet are now clearly inside the 3-point line. The extra steps have allowed Brandon Roy to let Alonzo Gee fly by, and he now has an open shot. Notice that the Referee is still looking directly at the play. He's not looking at the clock... he's looking EXACTLY where he's supposed to.. 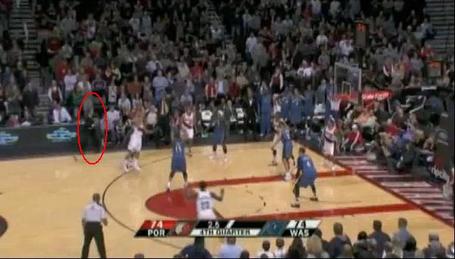 By the way, I've circled Flip Saunders here in this picture. Keep an eye on him during the video... He is positioned directly behind Roy on the sidelines; and he saw the travel, because he made the travel signal after the shot goes up.

On replay, it's clear that Brandon Roy traveled. You cannot make the excuse that it wasn't clear, or that "he may have traveled". There's no doubt the Referee saw the travel. There's no maybe about it. Flip Saunders saw it. Throw the red flag Flip. Throw it.

I'm a strong believer that referees and umpires can change the outcome of a game. I’m not saying calls are being blown on purpose, or that the League has some hidden agenda. I understand that sometimes, not in this case, but sometimes, a Referee might have a bad angle on a play. I understand that it's a fast game, and things happen quickly. But there's no excuse for not even attempting to correct a call that can affect the outcome of a game.

But instant replay cannot be used to help with one of the easiest calls in Basketball. The travel.Or with the hardest. The Charge/Block.

ESPN and the other major sports networks are as much to blame as the NBA. In that replay, you hear the ESPN announcer calling the play, heaping praise on Brandon Roy - but failing to even mention that he traveled. And you KNOW that those guys at ESPN saw that travel. Where is the objective sports reporting that the fans expect when they tune in to ESPN? Why is ESPN acting like the NBA's lackey? That travel was obvious, and ESPN should have called it out on the air. If every time an egregious non-foul, non-charge, non-block or non-travel call were shown on ESPN's Sports Center; and the announcers started railing on the poorly officiated games or calls - you KNOW David Stern and the League would do something to fix the problem.

I propose an instant replay system similar to what is used in the NFL. Give each Head Coach one instant replay request per half. Expand the instant replay parameters to include traveling and the Block/Charge calls .; and review EVERY play that ends the game. If the Referees know that a Coach can "throw the flag", they will be less inclined to swallow their whistles at the end of games.

Until the NBA does something to improve the quality of the Refereeing, and the visibility into how Referees are graded and educated, there will always be the underlying thought that the Referees ARE changing the outcome of games and that the League IS manipulating things behind the scenes.