The Wizards' offense has been pretty bad recently

Share All sharing options for: The Wizards' offense has been pretty bad recently

I know, I know, this is kind of the understatement of the century, but I hadn't realized just how terribly our offense has been since the trades until friend of the site Kevin Broom (TheSecretWeapon) sent me this graph.  Broom's a former contributor to Real GM and a big figure in the NBA advanced stat community, and he sent me this chart he made graphing the Wizards' game-by-game offensive and defensive efficiency ratings. 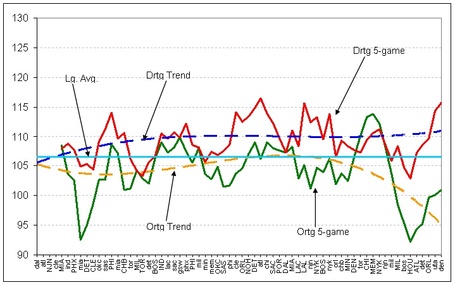 The silver lining is that our defense (red line) was doing well before this recent five-games-in-six-days stretch.  Hopefully that at least gets back to a decent level.  However, what these numbers clearly show is that, for all of Andray Blatche's success, you cannot build a good offense with him being your number one option.  He needs help, and lots of it, which if fine but ultimately a reality we need to face.