I'll never forget the look Mike Miller made after he hit his fifth three in six attempts in the third quarter of last night's win over the Knicks.  After the shot, which gave the Wizards a 79-65 lead, Miller turned toward the bench and kind of just shook his head back and forth.  It wasn't quite like Michael Jordan's famous shrug in the 1992 Finals, but it was the same type of gesture.  Yeah, I can't explain it either, Phil.

Miller's  itchy trigger finger all but sealed last night's win.  Miller had 25 points in the game, but 17 of those came in the third quarter, a quarter which began with the Knicks pulling even at 50 after trailing big early.  The Knicks' zone defense was confounding the Wizards.  They shot just 25 percent in the second quarter and weren't doing much better in the third.  Luckily, that was precisely the moment Miller decided he was going to go down shooting.

"It really comes down to what I said at the beginning of the year.  I'm going to pick my spots," Miller said.  "I just felt like our energy level slowed down there in the third quarter, so I decided to become a little more aggressive."

Miller's aggression was contagious last night.  In the second quarter, the Wizards looked unsure of what they wanted to do to attack the Knicks' zone.  Flip Saunders designed his sets appropriately, overloading the strong side in an attempt to create open shots.  The problem was, nobody was taking them.  Shots were passed up to do more probing, which played right into the Knicks hands.

"In the first half, as a team, when that ball gets swung into that corner, we gotta be ready to shoot it," Saunders said afterwards.  "Our guys wanted to take what I call two non-aggressive dribbles to try to get a shot instead of shooting them right away."

Miller wasn't the only one, of course.  Other guys became more decisive, notably Randy Foye (who Saunders gets on often for overdribbling) and Antawn Jamison.  But the fact that Miller was joining the party was particularly significant to a team that isn't used to him doing this.  Foye, who has played with Miller for over a year and a half now, said he's seen Miller play like this "a couple times," and both guys played most of Minnesota's games together last year.  When Foye was asked to talk about Miller, he immediately responded under his breath "Oh yeah!" as if he's been waiting all season to sing Miller's praises like this.

"I love when Mike Miller plays like that," Foye said.  "He was just unconscious, shooting the ball, letting it go.  That's what he does.  He can shoot the ball, make plays and rebound.  Driving the ball, having someone like that to kick it out to makes life a lot easier."

Foye tossed away a question suggesting that Miller needed to play more aggressively, saying "that's how you got to be, especially coming into a team with established guys."  However, Saunders, who has been preaching this of Miller all season, preached aggression again from Miller after last night's game.

"The biggest thing with Mike is that he's turned down too many shots.  I jump on him when he turns down shots," Saunders said.

What's Miller's response to that?

"Flip's trying to get on me to be a little more aggressive, but listen, I'm going to try to pick my spots.  I'm going to get guys involved, but when my shots are there and the energy level is down, that's when it's time for me to shoot some shots."

I'll take Flip's side on this one.  There have been many times this season when the energy level has been down and the other team has loaded up on our stars, yet Miller hasn't stepped forward and been aggressive with his shot.  I get the sense that it pains him to be known as just a shooter, even though he's one of the best in the league.  That he can do other stuff is a bonus, not a reason to run from his strength.

Snap Reaction: Wow, I didn't realize the Wizards' dominance on the offensive glass was that pronounced.

Other notes from last night:

-The vultures were circling around Antawn Jamison, asking him about his "snub" from the All-Star game.  I thought Saunders again had the best answer here when he said "They're 16 all-stars, but they're only going to take 12."  Jamison's played great this year, good enough where he might have made it if he played for a better team, but not on this club, as fair or unfair as that might be.

"It's understandable," Jamison said. "Just because I didn't get selected doesn't mean it's the end of the world. It gives me some much time off with the family, to go home and just rest this body for the second half of the season and try to finish off with a bang."

"I'm disappointed I didn't make it," he added. "Kind of frustrating the last two years, the team play, I won't say that's the reason why, but I think I've been playing pretty good basketball of late."  Then, he concluded with a joke.  "But as long as I can look myself in the mirror, I'm happy. They say I'm handsome, so I'm enjoying it. I'm even more handsome when I'm getting wins."

-I learned something new tonight.  Before, I thought the players chose which songs played when they scored a basket.  Apparently, they don't.  How did I find this out?  I asked Mike Miller why he chose to have Wild Cherry's "Play That Funky Music White Boy," and he seemed confused.

"It was just a song they put on (pause), because I'm white.  I don't make enough shots to worry about that.  Guys like Twan and those guys that make all the shots, they gotta worry about the songs."

-I've seen a lot of guys working with assistant coaches before games.  Caron Butler continually goes through his pre-game routine with Wes Unseld Jr.  Sam Cassell always works with Randy Foye, running through pick and rolls as Foye steps into his jumper.  Andray Blatche always runs through post moves and pick and pops with Gene Banks.  The young guys (Nick Young and Dominic McGuire) do dribbling and slashing drills all the time.  However, one guy who I haven't seen do a lot of structured pre-game workouts is JaVale McGee.  Most times I've seen him, he's just hanging around shooting jumpers.  Mind you, this is all I've seen, so it doesn't necessarily mean McGee just messes around during pre-game warmups.  Lots of the players prefer using the practice court to get into their routine.

However, before tonight's game, McGee was working extensively with Gene Banks on post moves.  Here's some photographic evidence. 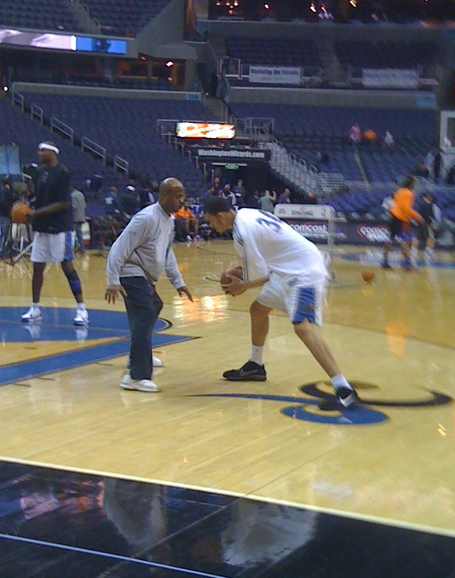 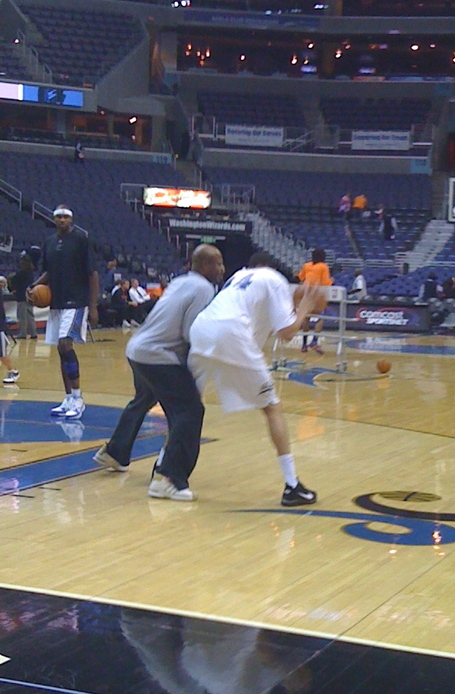 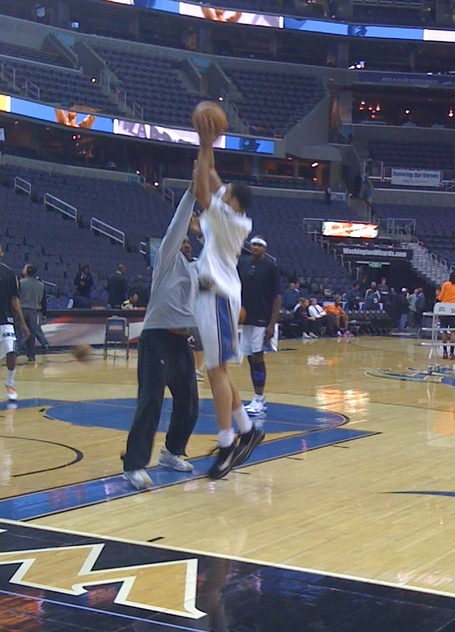 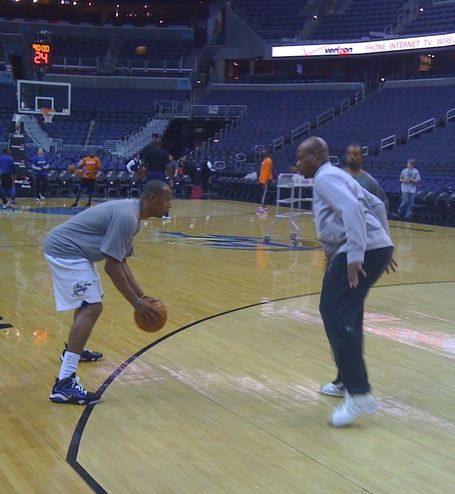 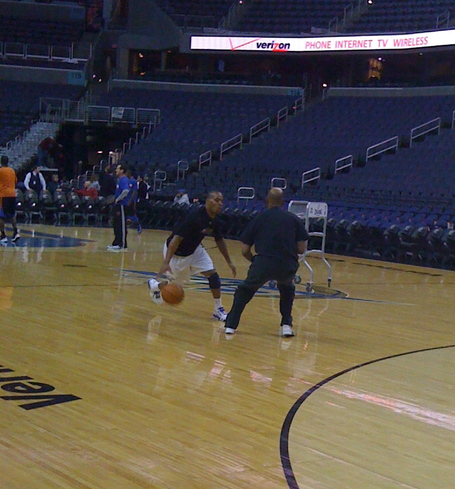 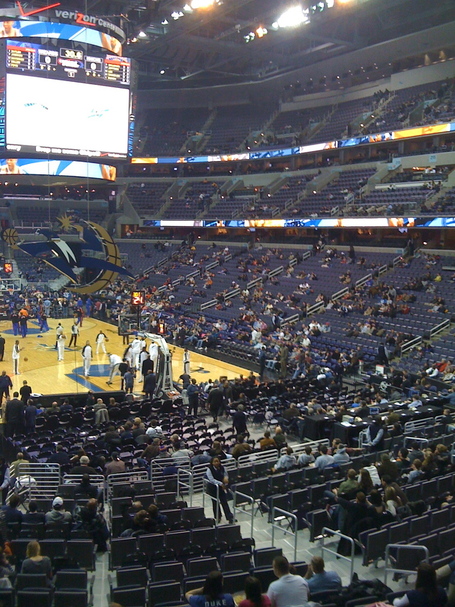