Wizards start slow, but finish with a strong defensive effort to get a win over the Indiana Pacers

Share All sharing options for: Wizards start slow, but finish with a strong defensive effort to get a win over the Indiana Pacers 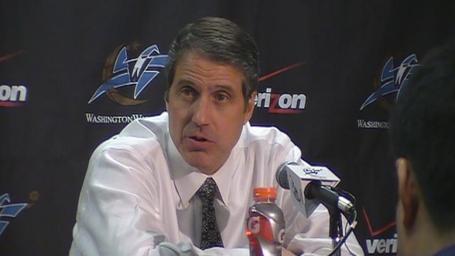 The Wizards were playing at home against a mediocre team, so one might have expected another close win. A cold shooting night and a lack of energy helped the Wizards to get off to a slow start. One example of this was the Wizards had a better three-point percentage (37.5%) than field goal percentage (29.4%) through about the 6 minute mark in the 2nd quarter. In many ways the Wizards were lucky to have a tied game at the half.

Early in the first quarter JaVale McGee picked up two quick fouls and left the game with nearly 8 minutes remaining in the quarter. Surprisingly, JaVale was able to remain clean the rest of the game and finished with only those two personal fouls. This was largely due to the Center minutes being spread among McGee, Armstrong and Blatche. Conversely, the Pacers Roy Hibbert nearly fouled out in nearly 15 minutes of play.

For much of the first half the Wizards appeared to be content playing at a pace that was much more comfortable for the Pacers. It is understandable if the Pacers were a bit tired. They were on the second game of a back-to-back and it was the third game in four nights. Even though they likely had tired legs, the Pacers Tyler Hansbrough often out-hustled the Wizards player he was matched up against.

After scoring only 2 points in the first quarter, Danny Granger came to life in the second quarter. Granger finished the first half with 12 points.

The Wizards injury concerns continued in the first half of the game as Kirk Hinrich, who entered the game with a sore knee. Hinrich, initially left the game when he banged his sore knee with another player. Shortly after he returned he took a knee to his left thigh causing a contusion which ended his night. The injury to Hinrich left the Wizards short-handed at the PG position as the team had elected to make Lester Hudson inactive as they thought they might need additional big men bodies to compete with Roy Hibbert. Ultimately, they decided to use Josh Howard to run the point in order to spell Wall who was suffering from leg cramps. Randy Wittman said, "we were able to sneak by with Josh handling the ball."

It is important to note that the team is not sure if Kirk Hinrich will be available on Friday against the Pacers.

During the second half the team began to knock down a few more shots, but still continued to struggle a bit with its shot. Well, except for Cartier Martin - who hasn't played many minutes since the trade for Rashard Lewis. Martin finished with 11 points on 4 - 6 shooting (3 - 3 from three). Conversely, Andray Blatche through about the 5 minute mark in the 4th quarter had 16 points, but on 7 for 21 from the field. He also had 11 rebounds and three assists. Randy Wittman felt that Blatche was taking good shots.

When asked about Andray's shot selection, Wittman said, "Andray, what did he miss? You know wide open shots in the 3rd quarter. I said to the guys, I think I am going to take him out for a couple minutes just to have him come over here. Those are great shots. I want him to shoot those shots. And he should shoot those shots." He continued, "his [Andray Blatche] head got a little messed up in missing them. And I said, hey those are great shots and if you get those shots again I want you to shoot them. He comes back in in the 4th quarter and he hits, I think, three in a row. Same shot."

Wittman is correct, Blatche did miss a number of open shots. Many of those shots he has proven to be able to make. However, his game is much too perimeter oriented. Often he pump fakes and moves horizontally rather than making a move towards the hoop and getting a higher percentage shot.

While the Wizards are playing with a much better defensive effort, before we get too excited, we must remind ourselves that they were playing the Indiana Pacers. The Pacers are only marginally better than the Wizards - mainly because they have been able to win a few games on the road. This is a team that had just lost its previous two games by 12 or more points. This was also the Pacers third game in four nights.

On a more positive note, Randy Wittman partially attributes the Wizards improvement on the defensive end to "Josh [Howard] getting healthy and Rashard [Lewis] coming in." He continued later saying, "defensively as we move forward he [Josh Howard] will be one of our best lock-down defenders. If we need someone to guard a Granger or if we need to guard someone on the perimeter, we're gonna probably put Josh on them. And that's why we've gotten better defensively."

Following the game, when asked about the Wizards Pacers Coach Jim O'Brien said, "they're a different basketball team. Their record doesn't indicate how talented they are right now with [John] Wall and Josh Howard and [Rashard] Lewis. They're a very talented team and they had too much for us tonight."