Giving thanks to the Wizards on this holiday season

Share All sharing options for: Giving thanks to the Wizards on this holiday season

We just had a thread where we aired all our grievances at the members of the Washington Wizards, but that was for Festivus two days ago.  Today is Christmas, and we should all be in a better mood.  Despite all the frustration of the past season for the Wizards' organization, there has been a lot of good that has been done.

So without further ado, this is your thread to give thanks to whoever you would like to within this organization.  Here are a couple quick one-liners to get things going.

Ted Leonsis: Thank you for being so open and transparent as you answer thousands and thousands of fan e-mails.  I can tell you are working hard, and I can tell that you are the right person to have on board to turn this ship around.

Ernie Grunfeld: Thank you for beginning the rebuilding process quickly and swiftly.  We may disagree philosophically on many moves you make, but I can certainly tell that you're fully on board with a full-scale rebuild like your boss is.  Thanks for that.

Flip Saunders: Thank you for continuing to try to do the best you can with a young bunch that you surely didn't sign up to coach.  I can tell they have tested your patience, but I appreciate all the hard work you put in to trying to make the best of a tough situation.

All the assistant coaches: Thanks for continuing to put in the work that you do.  You're the most underrated part of a team's structure.  Don't forget that.  Also, Sam, thanks for making John smile when he's hurt. 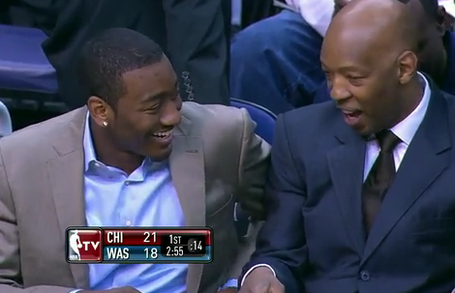 John Wall: Thank you for saying all the right things, carrying the weight of the franchise on your shoulders and doing so with such grace for such a young kid.  Now, get healthy.

Andray Blatche: I know there isn't a lot for us to be thankful for about you this year, but I can certainly tell that you are trying once you step on the floor.  I'm not sure whether that is the case in the hours you are off the floor, but at least you have shown that you care a little more on it.

Gilbert Arenas: Thanks for the memories.

Nick Young: Thanks for having such a great year and being such a generally goofy and pleasant fellow.  Keep it up.

JaVale McGee: Thanks for providing us some highlight moments this year, good or bad.  Now, mix in more substance.

Kirk Hinrich: Thanks for bringing all the underrated skills you were expected to bring this year.  It took you a little while to figure out where you'd help, but you've played much better recently.  Hopefully, we can reduce your role to accentuate your strengths and alleviate your weaknesses, but thanks for doing everything you've been expected to do.

Josh Howard: Thanks for always being around the team during your injury and for taking on the role of the leader even as many snickered about whether your past made you qualified.  The team seems to play harder when you're out there, at least initially.

Rashard Lewis: Thanks for saying all the right things upon coming here and ignoring those who tried to have sympathy for you.

Al Thornton: Thanks for continuing to play hard on the floor, even if you're not always in the right spot.

Trevor Booker: Thanks for bringing exactly what many feel this team needs in your limited time on the court.  Hopefully, you'll maintain your confidence and get more minutes.

Yi Jianlian: Thanks for working hard on your game this summer to become a more complete player.  Now, try to show that a little more on the court.

Hilton Armstrong: Thanks for being a much more solid player than I realized.  Your skills may be limited, but your intelligence serves the team well both on and off the court.

Cartier Martin: Thanks for fighting the good fight.  Keep being you and you'll stick around in this league.

Lester Hudson: Thanks for this preseason shot.

Hamady Ndiaye/Kevin Seraphin: Thanks for emerging as such goofy characters in the locker room and keeping the guys loose.  For Seraphin, thanks for being a physical presence, and hopefully you'll continue to improve your game.

All of you: Thanks for making this such a great Wizards community.  Hope you all have a happy holiday season.