Share All sharing options for: Gilbert Arenas Tribute Day: The Barbarian: Chronicling the Rise and Fall of Arenas' Wizards Career

Bullet Nation in Exile makes his BF front-page debut with this essay on the rise and fall of Arenas in D.C., as part of Gilbert Arenas Tribute Day.

[holding a basketball out]

This you can trust.

I'm into the long dark of the early morning writing for hours about Gilbert Arenas and I have to scrap all of it because an errant quote popped into my head.  I've been trying to explain the man behind the mass media demonization and suddenly Conan the Barbarian does better in 39 words than I was doing with 650 and counting.

All of you remember how Gilbert Arenas came into this league.  Why our hero wore the zero, and let his play answer the experts who predicted futility if he even managed to crack the rotation.  His life was always and only about the basketball.  He came to us on the flip of a coin without the benefit of national media coverage.  But by the dunks of Daryl Dawkins, can you imagine if he had?  What a fantastic thought in the aftermath of 'The DeCision,' Gil flipping a coin, watching it land, then turning to the camera and stating decisively, "Heads.  Which city is that?"

You should remember the 25th birthday party.  The ice sculpture, hip-hop heavies, and everything else you'd expect at an NBA superstar's personal soiree.  But as Palmer says in the article, Arenas was the guy responsible not just for the fun, but for the ride home.  How did we go from the multi-multi-millionaire who saw his guests off safely to a team cancer?

Add up everything basketball meant to him, how it ruled nearly every waking moment of his life, then take it away, and I'll show you the deconstruction of a star.

Most would say take two parts pure electricity, one part darkness, one part manic dedication, and three parts crazy and you've got the recipe for Gilbert Arenas.  I despise kitchen analogies for their utter banality and can't be nearly so glib describing a man who deserves better.  I mentioned before how Gil centered his entire life around basketball, and perhaps that statement is difficult to appreciate in a country where not making it rain in a strip club or hanging out with Hugh Heffner means your focus is right where it needs to be.

We write best what we know, and having been a gym rat in a different setting, I want to take you inside that mindset for a moment.  When you get up, you check the clock.  You already know how long it takes for you to make breakfast, eat, shower, and whatever else needs attending.  Your brain is ticking forward, and not five minutes go by after you’ve rolled out of bed before you have it nailed down to the fifteen minute mark when you’ll be out the door.  For me it was a five mile walk through Arizona summers.  There is no distinction between moving through your morning to whatever time you start to put in the work.  You go through your routines like most people put gas in their cars.  It’s just what you have to do to get where you want to go.  Every time we go through the motions is the purest expression of physicality we can summon.  The Greeks called it arête, the samurai knew it as bushido, and Vince Lombardi stated; "Perfection is not attainable, but if we chase perfection we can catch excellence."  The gym rat may not have heard these words, but he or she lives them with single-minded focus.

Gil bought a hugely expensive Cadillac in anticipation of that first round deal.  Drafted outside the first round and a guaranteed contract at Golden State, he wanted know later if he could give it back.  Gil played full court one-on-one, twenty-one, and two-on-one with Marc Jackson and Dean Oliver for three hours before scheduled practice.  Jackson made a habit of clotheslining Gil every time he drove by:

Well, you're in the NBA now.  You're going to feel pain.

When March 1st , 2002 finally rolled around Gil earned a starting spot and never looked back.  When the hard contact came, Gil was ready for it.  When he went to lunch on the road, Jason Richardson or Otis Smith always paid.  He learned his lessons in the way that made the most sense to him, and if it seems a little extreme on the outside looking on, then let it be a window into his character.  Prada stated earlier Arenas polarized analysts, but when it came to learning his lessons, he was black and white with the best of them.  When the choice was lifestyle or professional basketball player, it wasn't really a choice at all. 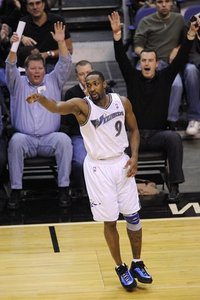 He came to D.C. randomly, and perhaps that's the only way an exciting young prospect would have signed here.  What came to us by chance changed our basketball landscape forever.  They say good things take time, and great things happen all at once.  They end that way, too.

Arenas rising was the most electrifying player in basketball.  The playoffs meant something to us besides affirming our number of ping pong balls.  The first blog superstar, he was more personality than we knew what to do with.  He made us grin until our faces hurt.  Then came the injury.  Little hurts as much as Palmer's summary:

Arenas can reel off a seemingly endless list of once buzz-worthy players who've fallen into the abyss before their time—Steve Francis, Stephon Marbury, Penny Hardaway, Darius Miles—and he is intent on not joining them. "He's one of the hardest-working players in this league," Kobe Bryant says. "He's earned my respect with the amount of preparation he puts into his game. I've seen many come and many go. He's special."

Having just signed a max deal, Arenas was suddenly the league's worst contract.  Unable to respond to more pressure than he had ever endured in his life, he rushed his recovery, came back, was injured again.  Blamed team doctors for not letting him play, letting him play.

Gungate happened, finger guns happened and suddenly he's an idiot who brought guns to work at best, an entitled thug at worst.  Finger guns made him the target for every person who hated rich personalities evading real reprecussions.  The word mercurial flew around so often you would think no one owned a thesaurus.

There is an intense motivational fire that consumes more fuel than the space shuttle needs to break orbit.  Everything you do is designed to stoke that fire, to get what you need out of your environment, to keep yourself peaking every second of every day.  It takes over your life, and you’re only too happy to pay the price, because it’s not what you do anymore, it’s what you are.

The most poignant moment of The Fall, as I will always think of the events surrounding gungate, was when Arenas' banner was removed from the Verizon Center.  What goes through your head when you watch them take away who you are?  It might be like becoming an old man in five minutes instead of forty years, but I don't want to know.

I want to watch him succeed in Orlando because in a sense he personifies the American dream.  No matter what mistakes he's made, the right combination of talent and hard work can be enough to take him back to the top.  When I tell my son about Gilbert Arenas I will pretend no virtues and hide no faults.  Can we remember him not as a superstar or a felon, but a man who did the most right he could while being unabashedly who he was?  That's a tall order, maybe an impossible one, but this is how I will choose to remember him, and I will not forget impossible is nothing.

Spot Adidas 2007 - Impossible is Nothing - Gilbert Arenas (via Ronin26)