Share All sharing options for: Gilbert Arenas Tribute Day: The perfect storm that led us to forget Arenas' heyday

Gilbert Arenas Tribute Day kicked off with an essay on Arenas and this blog, a look at his best buzzer beatersand five numbers that show his on-court value.  Now, enjoy your lunch as Rook6980 reflects on Arenas' downfall and how it's obscured the great things Arenas did here.

He's the player that rekindled my passion for basketball.

I've been a fan of the Wizards since the Gus Johnson, "Pearl" Monroe days. I watched and cheered and sang along with the fat lady as Wes and Elvin and a mediocre 44–38 team beat the Supersonics to bring Washington it's first major sports championship in 36 years. I was there during the 80's teams that included Manute, Muggsy and Moses.

I was hopeful during the resurgence in the mid-90's with Juwan, Chris and my all time favorite Bullet/Wizard, "my giant" Gheorghe Muresan. They changed the name of my team - but I stuck around. They went through years and years of mediocre basketball ... and my passion faded. I was still a "fan", just not engaged - not involved - not jazzed. I mean, it's hard to be passionate about Otis Thorpe, Hubert Davis and Christian Laettner. It's hard to be passionate when your team wouldn't even get one invitation to the All-Star game. I was still around during the false hope of the Michael Jordan seasons. I followed all those teams - every season -  I just wasn't focused; I wasn't excited. Following the team was more about habit than anything else.

It was Arenas that rekindled my passion for Wizards basketball. We were a playoff team again. We were going somewhere. And it was because of Arenas. He brought excitement. He brought winning. He brought swag; and I had some swag too. I could say I was a Wizards fan, right out loud, without fear of snickers or jeers. I wasn't embarrassed to be a Wizards fan. I could even brag a bit.

There were others... tens of thousands of others that, like me, became excited about the Wizards again. The VC rocked. There were chants of MVP. Throw it up from 35 feet, nothing but net. Last second game winning shots. Hibachi. Turn around before it hits the net, arms in the air. Twenty-six 40+ point games, a 54 point game. The 60 point game. THE SHOT against Chicago.  Washington Basketball mattered again. We were relevant. It was an exciting time to be a Wizards fan. I was passionate again. Involved. Engaged. Focused.

But it wasn't just Gilbert's on-court exploits that made him special. In an era when professional sports figures serve up the same pablum, interview after interview, Arenas was a breath of fresh air. We got the gospel according to Gilbert, unabashed, unfiltered and unabridged. He was interesting. He was refreshing. He was on the edge. He blogged. He was playful. A trickster. A joker. Supremely intelligent, and at the same time, occasionally lacking common sense. He was just a bit left of 'normal'. Bugs Bunny with a screw loose. Like your crazy uncle Bert at the Christmas party, Gilbert could be counted on to do and say the unusual things. Not what everyone else said or did. He wasn't calculated. He wasn't scripted. He wasn't "handled". He wasn't a robot. He was the anti-Lebron, and we loved him for it. 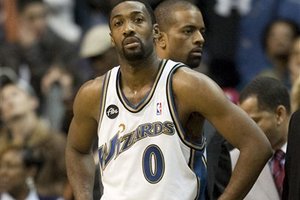 He eventually came back last year, but still lacked that certain something. He was tentative. Not sure of that knee. He wasn't the assassin - yet. But I could tell, he was getting there. He just needed time. A little more time. I could wait. We would once again be relevant. The future looked bright. We could get that feeling back. It was coming.

I won't rehash the whole "gun incident" - but I'm convinced that we have not heard the real truth yet. We've heard the hack, sensationalist media version - with the "brandishing" guns at one another. The "duel in DC" with "pistol-packing point guards" who "had heaters at the ready". You know.... the OK Corral version! We've also heard the DC Prosecutor's damning from the pulpit, protect the public version - where a dangerous criminal threatened a poor young citizen over a gambling debt, and subsequently led the Police on a merry romp, evading the truth using deception, changed stories, twisted and partial facts and outright lies. But I don't think we've heard the truth yet.

We've seen the consequences. We saw the light-hearted jokster trying to make fun of a bad situation (finger-guns), embarrassing his Highness the Commissioner. We saw the results of said Commissioner's red-faced-ness. A suspension unlike any other handed out in the history of the League. One that cost Arenas tens of millions of dollars in salary and endorsements.

We've seen a Prosecutor claim victory by putting a hardened, dangerous criminal behind the walls of a halfway house for 30-days. I'm just so glad our tax dollars are put to such good use.

We've seen a team's Management that turned tail, and sprinted as fast as they could away from the hardened, dangerous, criminal jokester; attempting to put as much distance as they could so as not to get any taint on themselves.

Once we hear the real story - whenever it actually comes out...... I'm convinced we'll find out the whole incident was much less sinister and sensational than originally portrayed.

I believe that Arenas was beset by the culmination of an almost perfect storm of events and people - A quiet news week; a hack reporter, desperate for a sensational story. A team that historically hides from, turns it's back on, or trades away controversy; an Iron Fisted Commissioner itching to create an example; and an over-zealous Prosecutor with one eye on the draconian DC gun laws, and the other eye on public opinion polls. It all came together as a raging cyclone around Arenas. Throw in Gilbert's almost self-destructive need to make fun of everything - and the outcome was almost inevitable.

I'm not saying that Arenas is blameless in the whole incident; quite the opposite - Had he used just a tiny bit of self control and judgement, the entire incident could have been avoided. But what I AM concerned about is that he was unjustly singled out for special punishment. If it were you or I that had brought a gun to the District (ie: not for sinister purposes), we would never have been publicly roasted in the Newspapers and on Television. We would never have lost tens of millions of dollars; and I guarantee you that any charges would have started out as a misdemeanor. Our friends would still be our friends. The people we trust would still be trustworthy. 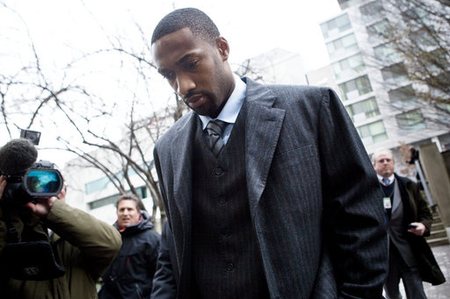 We've seen a different Arenas since he's returned to the team. The same team that once used his likeness and talents to sell tickets and merchandise. The team that once pointed to him as the franchise cornerstone. That same team now clearly wanted to move on without him. The team tore down his likeness from every corner of the Verizon Center. The team removed his merchandise from their store. The team tried to distance themselves from him, as if he were contageous or leperous. I can imagine that Arenas would feel abandoned.

Some few fans have remained faithful... but more than a few turned on him. Apparently, for some, the punishment he endured was not enough - and there are those that just cannot forgive ANY indiscretion or lack of judgement by Arenas. Oh sure, to them it's completely different for Delonte West - because he didn't make a joke of the situation.

Once the savior of basketball in DC, Arenas is now a pariah..... an anchor, slowing down the rebulid.... not a player with skills or a person with feelings, but a burdonsome "contract." A cancer that needed to be excised.

The Gilbert Arenas that returned after his stint in the halfway house was somber - almost despondent. The playfullness was gone. No more jokester - but also, no more Agent Zero, no more East Coast Assassin, no more hibachi. I sense that he had lost something - and something more than just some nicknames. He lost the trust he had in the organization ... lost the kinship of his former teammates .... He lost a piece of himself. He lost the child inside. He lost the very thing that made him a dangerous opponent on the court. He lost his joy for playing basketball.

He was the player that renewed my hope, stoked my passion, and rekindled my joy for Wizards basketball. He deserved better.

Gilbert, I hope you can find that playful, inner child in Orlando. I hope you find your joy. 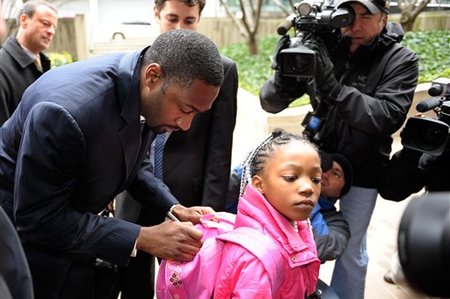