Gilbert Arenas Tribute Day: Why Arenas is responsible for this blog's existence, and evolution

Share All sharing options for: Gilbert Arenas Tribute Day: Why Arenas is responsible for this blog's existence, and evolution

We kick off Gilbert Arenas Tribute Day on Bullets Forever with a personal reflection on what Arenas meant to one Wizards blogger.

Now that Gilbert Arenas' memorable seven-plus year career in Washington D.C. is over, it's time for a confession of sorts.  Without Gilbert Arenas, this blog as you all know it probably would not exist.

You could say this in the literal "he rescued my fandom" way, which is something that he did for so many other basketball fans in this area.  I, along with so many other fans in the area, was beaten down by the way the Michael Jordan era ended.  I was tired of my team being the final landing spot for over-the-hill players, guys like Jordan, Bernard King, Moses Malone, Charles Oakley, Byron Russell, Mark Price and many more.  I could finally say that my favorite team had an elite star in his prime that not only wanted to be here, but embraced everything about playing in this city with these basketball-crazed fans looking for someone to appreciate.

But Gilbert Arenas meant far more to the state of this site than that.  In an era where sports analysis has increasingly become black and white, the goal of this site has always been to see the grey in situations.  Nobody was more prone to black-and-white analysis than Gilbert Arenas.  He was either the greatest thing to happen to Washington D.C. or the worst person to ever have for your franchise, depending on who you asked.  He was either the happy-go-lucky goofball or a dark, destructive force that needed psychological counseling.

And yet, in reality, he was none of those things.  He was merely an extremely complicated individual that required you to consistently revisit your impressions of him to get as accurate a picture as possible.

To say Gilbert Arenas is not the person you think is like saying the sky is blue.  It's so obvious that it's almost not even worth pointing out.

The contradictions are endless, and yet, they're understandable.  At the end of the day, athletes are interesting and complicated in ways we never see.  Thanks to the culture that currently exists in sports, athletes are asked to portray images instead of themselves.  They all say the same things in interviews, do all the same kinds of endorsements and play the same kind of on-court roles.  Stories about them kind of write themselves, with the same recycled themes over and over again.  It's a consequence of the news cycle, with writers on deadline and teams desperate to portray a certain kind of image to their constituents.

But that cycle doesn't tell the full truth about athletes.  They have crises of confidence like anyone else.  They try to be different people off the court than they are on it.  They look at things from their perspective instead of thinking of others sometimes.  They can look at things from others' perspective instead of their own sometimes. They mask pain with humor or other emotions.  They try to keep secrets, only to let them out to the wrong person.  In short, they do amazing things, and they also do bad things.  Just like any other person in this world.

Gilbert Arenas put all of that on display.  We knew when he did something great, and we knew when he made mistakes.  He didn't hide anything.  For me, Arenas provided a wonderful lesson on how to deal with people.  It's easy to cast someone as a lunatic based on one strange incident.  It's easy to dismiss someone as a bad influence based on one bad shot or one bad quote to the press.  It's equally easy to call someone a hero based on one great shot.  But when writing about Gilbert Arenas, you couldn't do those things.  You'd be capturing only a small part of who he really was.

It also provided a great lesson about how to analyze the game.  There are no easy answers in basketball, just as there's no easy way to characterize Gilbert Arenas.  Plays break down for many reasons.  Players can thrive in one situation and falter in another.  Games can turn out differently than you could have ever imagined.  The best analysis comes from using as many different kinds of sources as possible and not accepting anything as gospel ... and even that paints an incomplete picture.  You never know as much about the game as you think, just as nobody ever knows as much about Gilbert Arenas as they think.  The act of following Arenas over the years has helped reinforce this.

I realize this is a deeply personal reflection on Arenas.  Most of you love him for the excitement he gave to this city, and I of course loved that too.  But when people ask me why I seem to favor Arenas in my writing, that's about the best explanation I can give.  Arenas allowed me to learn so much about myself, as a writer, an analyst, a fan and even a person.  That'll always be his legacy to me. 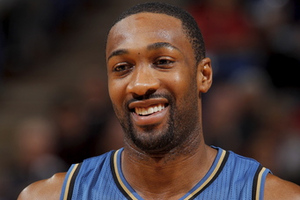