Gilbert Arenas discusses how he was defended in the fourth quarter

Share All sharing options for: Gilbert Arenas discusses how he was defended in the fourth quarter

WASHINGTON, D.C. - A full recap is coming later, but I thought this was an interesting little tidbit.

If you watched the fourth quarter, you noticed that Gilbert Arenas was getting to the lane a lot more than he's done in a little while.  Now, granted, the finishes weren't always pretty, and he did most of his damage on three-pointers, but it was great to see how well he was able to get to the rim.

One of the things that intrigued me most was the way the Grizzlies defended Arenas. Tony Allen, the defensive stalwart brought over from Boston in the offseason, really crowded Arenas hard tonight, more than most players I've seen.  He also did something that struck me as interesting: he forced Arenas right.

Now, normally, Arenas is better going left, at least according to him, so if Allen was given a scouting report, he followed it well. I don't have a ton of data to back this up, and this is very crude, but it's worth noting that Arenas shot a higher percentage from the left side of the floor in his last healthy year in 2007. Here's a screenshot from NBA HotSpots. 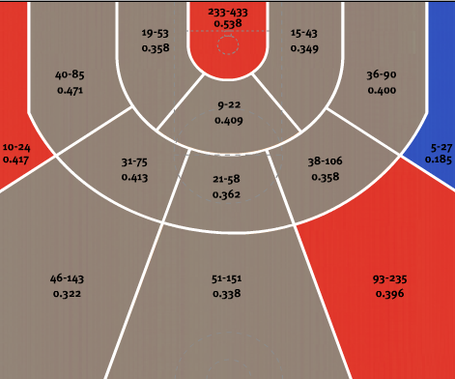 But tonight, it didn't work, as Arenas got in the lane quite easily despite going on his less comfortable hand.  After the game, Arenas said Allen was actually doing him a favor.

"I like going left. I have no idea why I like going left, but he pushed me right.  But I preferred that today, because I can't really jump off the right ankle.  So he was funneling me to his strength, at least for today."

Arenas said he was "a little" surprised when he saw Allen crowding him, but admitted that's just what Allen likes to do. The larger question, though, is whether Arenas can still  finish at the rim. He had a couple nice layups tonight, clearly showing he can still get there, but he also looked tentative at times, passing out instead of going up and missing key shots.  Sometimes, it didn't matter -- the one lefty layup he missed late was slammed home by JaVale McGee -- but he admitted afterwards that it's still a work in progress.

"There were some shots that I think I pass up because I haven't been used to it the last couple weeks, but every day I'm getting more comfortable jumping off the right and left leg. I gotta finish a little bit better down the road."

Still, it's a good sign that he's improving and playing to his strengths, even if they are new strengths like going to his right hand.

ONE OTHER ARENAS NOTE: Arenas said that he chose number nine because nine symbolizes "the rebirth."  I don't know a lot about numerology, and a quick Google scan revealed little real information, but clearly there's a good reason for Arenas to sport number nine.  Arenas also said that one prominent NBA star wanted to change his number to nine for the same reason and reached out to him.  He declined to say who, but when someone joked that it was Greg Oden, Arenas said "no, no, someone more prominent than him."