On Andray Blatche and shot selection

Share All sharing options for: On Andray Blatche and shot selection

Via our intrepid reporter Sean Fagan, we learned last night that Andray Blatche doesn't want to hear people question his shot selection.  Here's what he said when one reporter brought it up.

"My shot selection is always good. I don't think I did anything wrong tonight....Y'all are asking about my shots and I'm always shooting over 50%. I don't know what the problem with you is man. When you're shooting over 50% at my size its a good shot. Alright. You know what I'm saying? What do you want me to do? You want me to shoot 20 for twenty? I would loooooove to! I can't help it if I don't."

Now, it's worth noting one thing before we continue, something I've written a few times, but need to write again.  Of all the players I have dealt with on the Wizards, Blatche is the one that can be most defensive in post-game interviews.  Now, granted, every NBA player can be defensive on the inside when faced with criticism, but Blatche is one of the few players who lashes out about it publicly.  So it's important to take this stuff with a grain of salt sometimes.  He just responds to criticism less diplomatically than most others.  It doesn't make him any more of a bad guy with a bad mindset than his teammates.

That said, is Blatche right?  Should we get off his back about shot selection?

For one game at least, he has a point.  Here's Blatche's shot chart from last night. 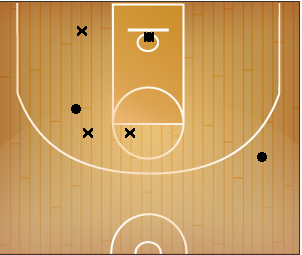 Blatche took 13 shots last night. Eight were right at the basket (that's the big glob right at the hoop). Only five were outside the paint.  For one night at least, his shot selection was quite good.  Now, obviously, it's the Raptors, who can't guard anyone, so let's not go too crazy.  Blatche is also wrong to assume his shot selection is good because his percentage is good -- you can take and make bad shots sometimes.  Finally, it came one game after Blatche submitted this monstrosity of a shot chart against the Bulls. 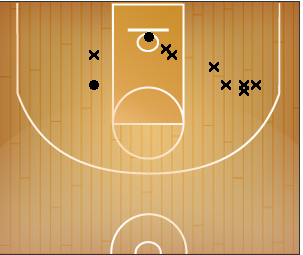 But to whoever asked that question: you picked a pretty odd time to bring it up.  Blatche was right to flip out a bit at you.

The larger concern I have with Blatche isn't his shot selection.  It's his defense.  The data certainly confirms what we're all seeing.  According to Basketball Value, the Wizards are 6.34 points per 100 possessions better on defense when Blatche is off the court.  That can't happen.  I'll live with iffy shot selection from Blatche at times if he picks it up on D.