The Wizards are not attempting many free throws

Share All sharing options for: The Wizards are not attempting many free throws

"The Wizards are a jump-shooting team." -everyone, everywhere

This was the knock on the Washington Wizards for many, many years, dating back to the Idiosyncratic Three era.  Back then, though, the criticism was unfounded.  The Wizards may not have had a post threat back then, but they made up for it by slashing to the basket and creating contact.  From 2005 to 2008, the Wizards ranked in the top 11 in most free throws attempted per 100 shot attempts, finishing eighth, fourth, sixth and 11th, respectively.

That was then.  Now, the criticism is back, and boy is in on point.  After shooting just eight free throws against the Bulls last night, something that's only happened ten times with the franchise since 1986, the Wizards rank tied for 29th out of 30 teams in free throws attempted per 100 shot attempts, at just 20.2.  Only the Golden State Warriors are lower.

I've always felt the ability to get to the free-throw line is underrated.  Not only do you find a way to create offense out of nothing, but you also get your opponents in foul trouble, which causes them to play less aggressively.  It's also a means of controlling tempo, since it forces your opponent to execute their half-court offense instead of getting out in transition.  This is especially important for a Wizards team that tries to push off missed shots to take advantage of John Wall's speed.

Why are the Wizards getting to the line so infrequently?  Some reasons, both obvious and less obvious, below the jump.

The Wizards' big men are too weak

I don't think I need to go into too much depth here, because anyone watching these games can see it, but it's still worth noting.  Take away Andray Blatche's 14 free-throw game against Philadelphia, and he's only attempted 14 free throws all year.  This is a small sample size, to be sure, but it's been a problem for Blatche even in better times.  He's never averaged more than four free-throw attempts per 36 minutes, and only averaged 3.7/36 in his breakout year last year.  He was able to out-quick opponents inside last year, but that hasn't happened this year.  This has been an issue when he's posted up and when he's hung too much on the perimeter.  He just needs to find a way to create more contact inside.  Sadly, I think the only real answer is a transformation in his upper- and lower-body strength that probably won't ever come.

JaVale McGee, meanwhile, has seen his free-throw rate plummet in his three-year career, despite getting stronger and quicker.  As a rookie, McGe attempted 5.1 free throws/36 minutes.  Last year, that number was 4.3, and this year, it's 3.0.  I think system explains a lot of this, since McGee is often asked to start on the perimeter and cut to the hoop at the right time for a pass or offensive rebound.  Either way, he's not going to give you a ton of free-throws.

Throw in Yi Jianlian, who gets blocked more than he draws fouls, and Hilton Armstrong, who gets shoved around by bigger players, and your frontcourt is providing absolutely no help in getting to the line.

When we thought about this roster, one thing that we thought might be a saving grace is that Wall could get 8-10 points by himself just using his speed and athleticism to get to the free-throw line.  That, in retrospect, was extremely optimistic.  One day, Wall will likely be able to do that, once he figures out just how to use his skills, but that day isn't today.  He's shooting just 4.6 free throws per 36 minutes this season, which isn't bad, but isn't elite.

In transition, Wall has been borderline unstoppable, but he hasn't translated that quite as well to the halfcourt.  The major issue is that teams are sagging off Wall and begging him to shoot the jumper, and when you combine that with the Wizards' poor spacing, the driving lanes aren't there.  However, Wall also is still learning how to use his speed in the halfcourt effectively to give him a chance to get to the rim.  As weird as it sounds, he is most under control when he is running at full speed.  When he has to use angles and change speeds, he's much less aggressive.

Here's an example from the Bulls game.  Chicago is notoriously hard to drive on because of the presence of Joakim Noah, but here, Noah is mostly out of the play.  Wall has just made a left-to-right crossover on Derrick Rose, and he has a bit of room.  However, instead of using it, Wall pulls up for a jump shot that ends up going in, but still isn't a shot he'll hit much. 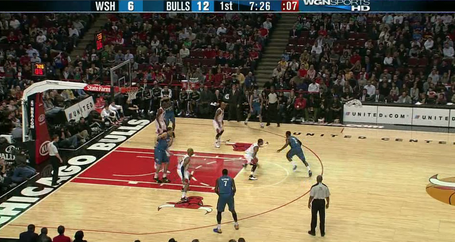 Wall's lack of a jump shot hurts here - notice how much cushion Derrick Rose gives him - but Wall has to try to force the issue there for his team.  Compare that to this formation on the other end.  Rose is able to get to the rim here, and while he's helped by typically poor help defense from Blatche, it's not like Rose has that much more room to operate. 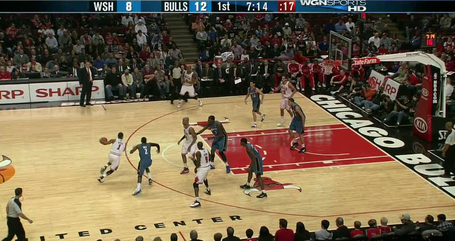 Wall will learn, but I'd like to see him practice trying to drive instead of settling for a 16-foot pull-up jumper each time.

Flip Saunders' teams don't get to the line well

Saunders' offense does a lot of things very well when properly executed.  His teams have often been among the best shooting teams in the league, and they always share the ball and take care of it well.  But free-throw shooting has always been an issue for his clubs.

Via Basketball Reference, here are his team's free-throw differentials since Stephon Marbury left in 1998/99.

That's exactly one year where his teams have shot more free thrown than his opponent.  Part of it is personnel, but when we're talking about a decade-long trend with three different teams, it comes back on the head coach.  Saunders' offense often works against him, because he likes to have big men who can shoot and wings that are adept at shooting off screens.  That means his teams shoot a high percentage, but it also pulls players away from the basket.  Then, when Saunders tells them to get to the line, they break the offense to make out-of-control drives.  It's a bit of a catch-22.

Honestly, though, none of these reasons are as significant as the Arenas factor.  When Arenas was in his heyday, he was a free-throw magnet.  He was an expert at using angles and jumping into big men to force the referee to call the foul, bailing the Wizards out so many times on possessions that weren't going anywhere.  From 2005-07, Arenas shot 8.5, 8.8 and 8.1 free throws/36 minutes.  But right now, Arenas just doesn't have the legs or the confidence to get to the rim and draw fouls.

Nowhere was this more apparent than in the Bulls' game.  Arenas had 30 points, but there were anywhere from 6-10 times I witnessed where the old Arenas would have found a way to draw a foul.  Here are a couple that stood out to me. 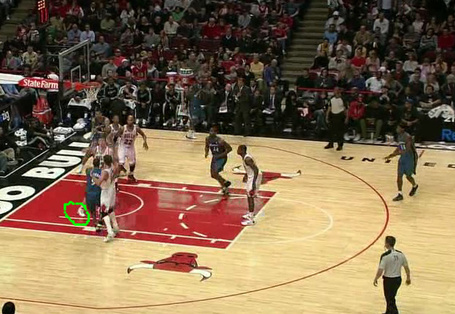 This is a play that happened late in the third quarter.  Arenas got by Kyle Korver, and he's about to jump into rookie big man Omer Asik.  As you can see from the awkwardly-shaped green circle, Asik's foot is firmly inside the restricted area.  In the past, Arenas would have known this and jumped into Asik to draw the foul.  Instead, he dished this off to Hilton Armstrong, who missed a layup.  That was a missed opportunity that you can chalk up to Arenas' lack of confidence. 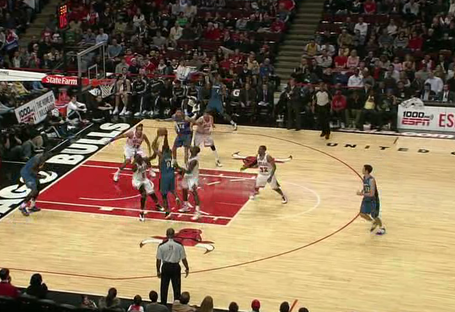 This is a play early in the game.  In the past, Arenas would have taken one more dribble before this point and been able to jump into Joakim Noah to draw the foul.  He was strong enough in his legs to get the kind of explosion necessary even when jumping off one foot.  Nowadays, Arenas is tentative, and his legs aren't that strong.  So he ends up taking his second step between two Bulls players before he gets to Noah.  On this play, Arenas tries to dump it off to Blatche and had his pass deflected. 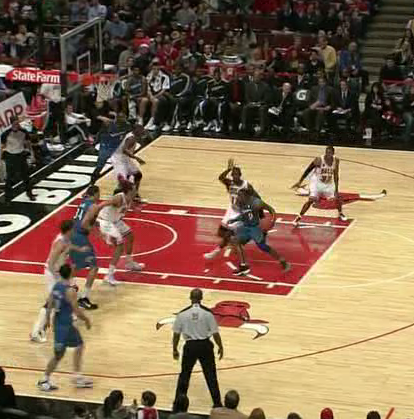 This is just a situation where Ronnie Brewer can stay in front of Arenas, which never would have happened pre-injury. 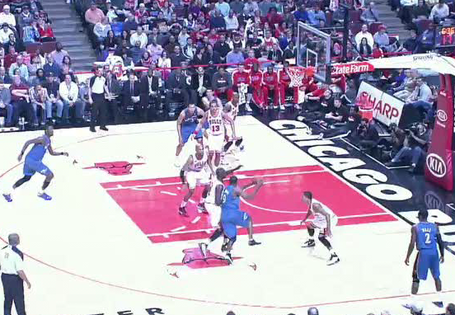 Arenas has a half-step on Luol Deng here, and there's no way Taj Gibson can get over and help.  Layup and a foul, right?  Nope.  Arenas, for some reason, doesn't even try to go up, and he instead dumps it off to a cutting Blatche.  Blatche got the layup, but it's pretty sad that Arenas couldn't at least draw a foul. 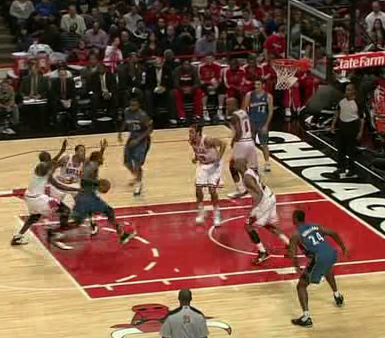 Here's another situation where Arenas is taking his second step much further back than he used to do.  Of course, neither Noah or Gibson is in position to take a charge, so if Arenas legs were strong enough, he could still generate enough explosion to jump into them and draw a foul.  Instead, he tries a dump-off pass to Hilton Armstrong that gets deflected. 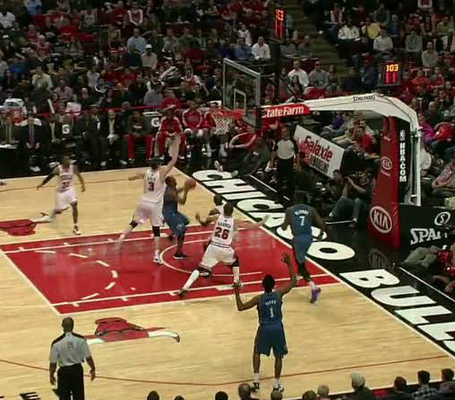 Arenas had this shot blocked by Asik because he went for a lefty layup instead of jumping in front of Asik and going to his right hand. 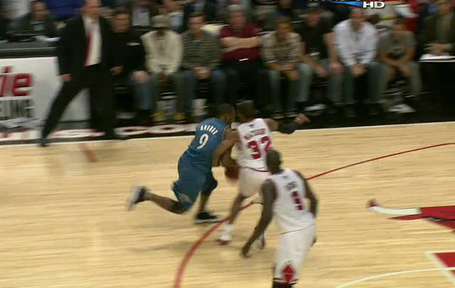 This is a screenshot of the offensive foul Arenas was called for on C.J. Watson at the end of the third quarter.  When Arenas was a superstar player, he got that call.

If Arenas can get back in shape, he should be able to explode off one foot relatively well, though probably not as good as he could in his prime.  With more game time, he may rediscover his ability to time his jumps into big men.  But clearly, Arenas isn't even able to approximate the foul-drawing magnet he was in his prime.  I figured he could at least be good enough to get 5-6 free-throw attempts per 36 minutes, but right now, he's only getting 2.3.  Based on these screenshots, you can see why.

And of course, our subtle Kirk Hinrich dig

Here's a screenshot from the Chicago game.  Guess how the play ended.

a) Get a layup and a foul

b) Get an uncontested layup 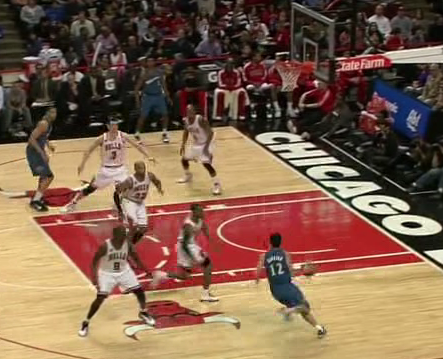 If you guessed e, you win.  Congratulations.  Kirk just cannot get to the rim anymore.  We will have to look for a different hero to solve the free-throw shooting woes.