Notes from the final day of Wizards training camp

Share All sharing options for: Notes from the final day of Wizards training camp

The following items came during the media availability session following today's intra-squad scrimmage. There are a few interesting tidbits below but first a a few pictures.

Gilbert spent his time on the bench with a towel over his head.  Here he is sitting in between John Wall and Trevor Booker.

Here Arenas is sitting in between JaVale McGee and Andray Blatche. 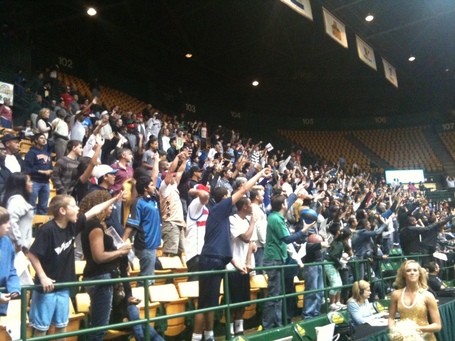 A picture of the crowd following the end of the scrimmage.

JaVale was nearly nude after he finished signing autographs for the fans after the scrimmage.

Lastly, just in case you have not seen it online, here is the video highlights of the scrimmage.  Take a look at the 1:16 mark for John Wall's sick 360 layup.