The Wizards will take on the Atlanta Hawks tonight, hoping to put together a better performance than they put together in their first game against the Orlando Magic. Atlanta is a better matchup for the Wiz kids, that's for sure. They don't have a dominant big man like Dwight Howard, and their point guard defense is fairly weak. That means John Wall should have a much better game tonight than he did in his opener.

That said, Atlanta presents a whole different set of problems than the Magic. They have been very impressive thus far this year, starting the season with road wins against Memphis and Philadelphia. In the past, their offense was stodgy, but they are moving the ball so much better than they did last year. They lack a dominant post threat like Howard, but they compensate by pulling their big men away from the basket and running their guards off them. Joe Johnson is an extremely tough cover under these circumstances, and you always have to be aware of Al Horford shooting a jumper or Josh Smith driving by you. You can help off them to protect the basket, but you also have to be good with your close-outs, because Atlanta won't hesitate to rotate the ball. Also, the Hawks also have done a much better job of running, and you have to watch out for transition three-pointers. In other words, this will be a challenge.

Below the jump, I'll break down a play I've seen them run a couple times. In the meantime, here's hoping the Wizards' big men are much more aware than they were in the first game. If so, I suspect we'll see a much better performance. If not? I'm worried. Very worried.

As I mentioned up front, the Hawks like to pull their big men away from the basket and use them in the high post. Both Smith and Horford are excellent passers, which makes this an ideal strategy that's really difficult to defend. However, what really makes Atlanta dangerous is Johnson's ability to move without the ball, something that coach Larry Drew has emphasized this season. You always need to be aware of Johnson going backdoor, which is tough because he's also an outstanding shooter.

Here's a set the Hawks ran against the Memphis Grizzlies twice in a row for two easy layups. Apologies for the blurry screenshots. 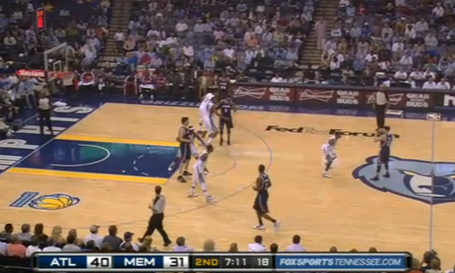 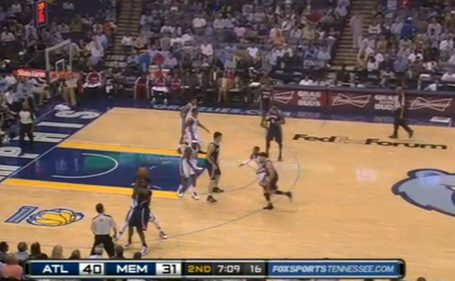 Bibby feeds to Johnson, and then cuts through off a Pachulia screen. This forces Zach Randolph to pay attention to Bibby coming through the lane, which frees Pachulia to receive the pass from Johnson. 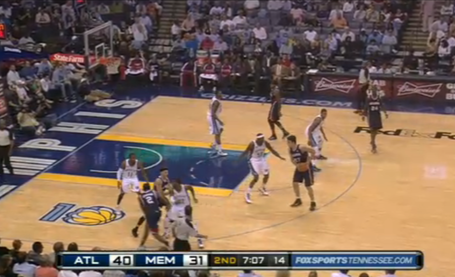 Pachulia gets the pass, and Bibby immediately turns to set a back pick on O.J. Mayo. The Grizzlies now have a decision to make here. Mike Conley really has no choice but to switch this play, which sets up a mismatch. Darrell Arthur notices something, so he's in good help position. Memphis, so far, has done nothing wrong. 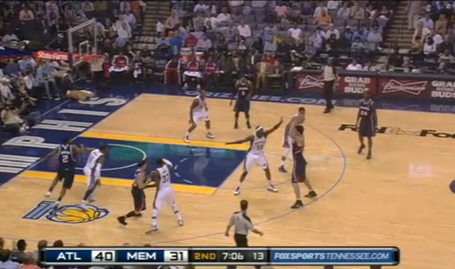 Unfortunately, Conley is shorter than Johnson. He needs to be more aggressive guarding him, but either way, Johnson's size gives him a major advantage here. Arthur now is a little too close to Josh Smith, and isn't in great help position. Conley ends up getting caught a step behind Johnson, and Pachulia delivers a beautiful pass for a layup. 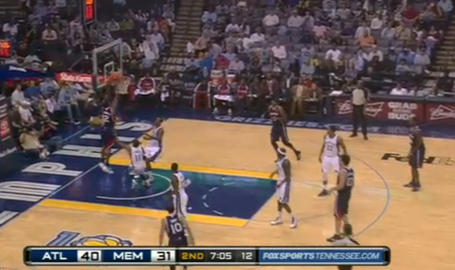 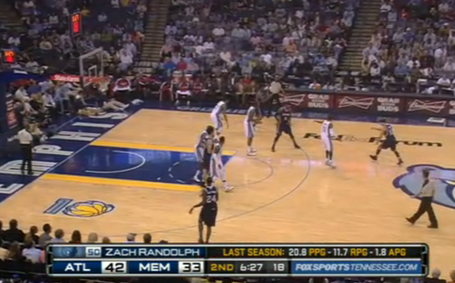 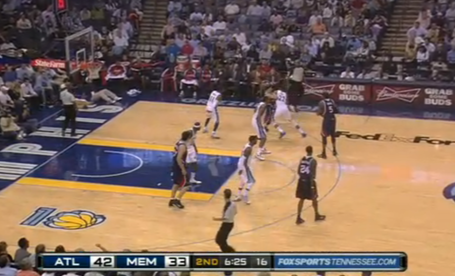 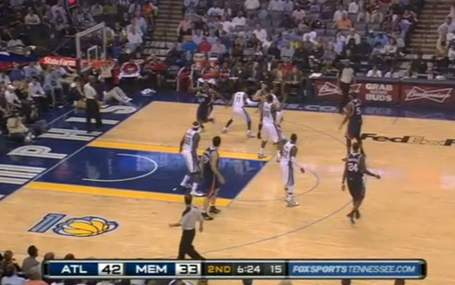 This time, Conley is completely unaware of what's going on. Zach Randolph is standing upright, and is in very poor help position. Johnson gets an even easier layup. 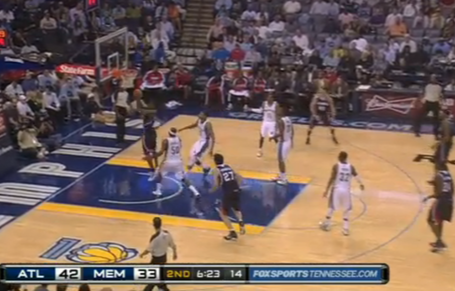 Atlanta's spacing makes defending this play extremely tough. That said, the Wizards' big men need to be aware when there's a backcut on the weakside so they can be in proper help position. You can live with Atlanta's bigs shooting jumpers as long as you can prevent layups. Andray Blatche and JaVale McGee need to be in better help position than Memphis' bigs were defending this play.