Share All sharing options for: Wizards beat the depleted Trail Blazers in DC: Final wrap, where we keep perspective

Dictionary.com defines perspective as 'the state of existing in space before the eye."  Okay, that's kind of a lame definition that doesn't really mean anything.  I just really wanted to start a blog post that way.

But let's not think this was an example of us building toward anything serious.  Our opponent was missing it's best player, it's two best big men and it's two best small forwards.  Of it's top eight players from last year, only three played.  Those that did play missed a ton of open looks from three, particularly in the second quarter.  I'm talking about clanks from Martell Webster, Steve Blake and Rudy Fernandez, three excellent three-point shooters.  In the third quarter, that shorthanded team totally dominated, forcing tons of turnovers and getting a ton of fast breaks despite being the slowest-paced team in the league.  Finally, they ran out of gas because their only legitimate offensive option, LaMarcus Aldridge, was predictably swallowed up by Brendan Haywood.  It took two plays that aren't winning basketball plays -- a Caron Butler contested 21-foot jumper followed by a wild Butler drive and tip in -- for the Wizards to finish the Blazers off.

I'm glad the Wizards won, don't get me wrong.  There's a certain intangible benefit to confidence and the thought of moving in the right direction, and to think that way, you have to win.  The Wizards' locker room was a joyous as I've seen it in a while, and that's a good thing.  Lots of guys were cracking jokes, as I'll describe a bit below.  But come on, let's not talk about the playoffs, please?  Let's not talk about keeping this group together.  Let's beat some real teams before we go too crazy.

Snap Reaction: The super slow pace obscured another solid offensive effort for the Wizards.  It's getting to the point where you have to wonder about the intangible effect Mike Miller's presence brings.  I'll run some numbers to prove this later this week.  Defensively, you see classic zone defense behavior at play - decent eFG%, low FTs, tons of offensive rebounds.

Snap Reaction: I imagine that closing lineup will finish a lot of games for us, so it's good to see they were effective in this one.

Some random quotes and notes:

-I'm still trying to figure out what to make about several of Flip Saunders' post-game comments about the team.  The subject of Gilbert Arenas came up several times, and Saunders used some interesting words to describe the team's play without him.

"Sometimes what happens when you lose somebody, whether they're injured or whatever, is the players actually become more coachable. What I mean by that is, if some people think they're down a talent level or whenever you lose a big player, they say, 'Hey, coach, what do you want me to do?' So then, if they lose, it's the coaches' fault."

More coachable?  That's an interesting one.  Later, he said, point-blank, "Why it's taken so long, I don't know.  But we've been more coachable."  Look, Flip loves Gilbert Arenas, and he's one of the few guys who Arenas still corresponds with, so he's not throwing Gil under the bus.  But the whole "more coachable stuff" is definitely odd phrasing.

-How are the Wizards being more coachable?

"What we've done is, we've stayed more with our system. At times, when we've fallen behind in the past in the fourth quarter, one guy, no matter who it was, thought they had to do it by himself. We've run plays to get the ball to guys in their spots, but we've done it off motion, so there hasn't been as much help. It's not as much one guy playing against three guys," Saunders said.

Again, this was not something only Gilbert Arenas did, but still, he did it, and it hurt us late in games.

-Leave it to Randy Foye, though, to bring some sense into all of this.  I asked him point-blank whether it was fair to say that Arenas' absence in part has caused the team to play more cohesively.  (Full disclosure: I figured he'd say no, which is kind of why I asked).  Foye's response:

"No, it's not fair to say.  Gilbert was a big part of not just this team, but what this organization was all about, but I think that, just now, guys are getting the opportunity, and guys are taking advantage of it."

-Speaking of Arenas, they've removed all pictures of him in the press room.  Previously, a picture of his game-winner over the Jazz in 2007 greeted you, but that picture has been replaced by a picture of Butler coming out in the pre-game warmups, with the fire in the background.

-Two guys who did not get much of an opportunity were Nick Young and JaVale McGee.  Young played a forgettable two minutes in the third quarter and McGee didn't play.  Despite the win, Saunders said he made a mistake not getting those guys (and Dominic McGuire) in the game.

"I'm kicking myself.  I really wanted to play JaVale early, didn't get to, and I thought it would be unfortunate to put him in late [like] I did with Nick. I put them in a bad situation," Saunders said, later adding "I would have liked to play [Nick and Dominic] more to reward them for how they played the last game."

-You've probably noticed the Wizards playing a lot more zone defense lately.  I've gone on record as saying that the zone bothers me, and the zone trap thing the Wizards do too bugs me more.  What I see a lot is open shots that result from a ton of missed assignments and poor rebounding.  But I can't deny that it's worked pretty well recently, and Saunders made an interesting point in the press conference after the game about it.

"When you play a lot of zone, you learn more zone principles, like help-and-recover. So we're in more of a help-type situation," Saunders said. "Playing more zone has helped our man-to-man defense."

-Mike Miller, of course, had a giveaway where he would donate $1,000 to Haiti victims for every three-point shot the Wizards made.  That didn't go over so well, since the Wizards made only two three-pointers as a team.  After the game, someone joked that Miller should have instead donated based on hustle plays, since he was seen diving on the floor (in vain, I should add) twice during the game. "That's right," Miller said, smiling.  "Hustle plays."

-Leave it to Brendan Haywood, the other true "role player" on this team in my opinion, to sum up Mike Miller perfectly.

"Mike Miller is great for our team because he tries to do something different.  He doesn't come into the game and try to score.  We have a lot of guys who try to score.  Mike comes in and tries to get everyone in the flow as far as getting his shots off drive and kicks, driving and kicking to open teammates, so he gives us a different look.  That's something we need out there."

-Randy Foye remained in a good mood, as he's been recently.  He's been way more talkative now that he's playing starters' minutes, whereas before his answers were mostly short and dull.  Saunders, who can be seen yelling at Foye a lot during games, said that Foye is "still going through the process of learning [the point guard position]. Sometimes I want to strangle him. Sometimes I want to hug him."  But Saunders likes Foye's recent play, and Foye likes Saunders' attention.

-Foye's also talking up how he's been able to play well recently despite being buried to the bench for a long stretch.

"I just think for me, being the two and being on the bench for some time, I got a chance to watch. I was like a sponge. Everything coach was telling Gilbert [Arenas], I was just watching and observing, trying to be a sponge. Now I'm trying to put that in play when I'm on the court. I understand at the end of games, you have to run your offense through, you have to go to the hot guy. But you just can't give the hot guy the ball and go one on one. You have to run it through your offense, and that's what I'm trying to do," he said.

-Foye's also cool with Andray Blatche stealing his cologne again.  I think.  Blatche, who was suspended in part because he stole Foye's cologne and sprayed it around the locker room, snuck over to Foye's locker again, swiped one of Foye's fragrances, sprayed himself with it, and told the assembled media "Tell Randy Foye I said thank you!"  When told of the exchange, Foye laughed, shrugged, and said "Hey, whatever makes 'Dray happy. I'm an assist man. I'm just getting assists."

-If you've been following BF's Twitter, you might know about the little exchange I had with Chris Broussard on the subject of Ted Leonsis' future ownership.  Broussard is adamant that Leonsis is not so hot on keeping the Wizards, speculating he might buy the building, owned by Washington Sports and Entertainment, and sell the team.  Seems pretty unlikely on its face -- I thought WSE owned the Verizon Center and the Wizards in a package deal -- but hey, that's what he says.  Regardless, Thomas Boswell was in the locker room to get material for his recent scathing column, asked Saunders and Jamison about the prospect of Leonsis owning the team.  Saunders declined to comment, but Jamison talked like a guy who was ready for Leonsis to be around for the long haul.

-What about future moves with Leonsis.  Jamison's quote on that:

"Mister L pretty much knows the scenario here, and once he gets here, I think he'll get things moving in the right direction. Whether that calls for trades or not, that's up to the front office."

Pretty much what we expected to here, and yes, he did actually say "Mr L."

-Finally, the crowd yesterday got into it by the end, but man was it disappointing.  A season-low 12,209 people officially showed up, and I doubt there were even that many in the building.  Here's what the stadium looked like at approximately 1 p.m. yesterday.  Yikes doesn't begin to describe it. 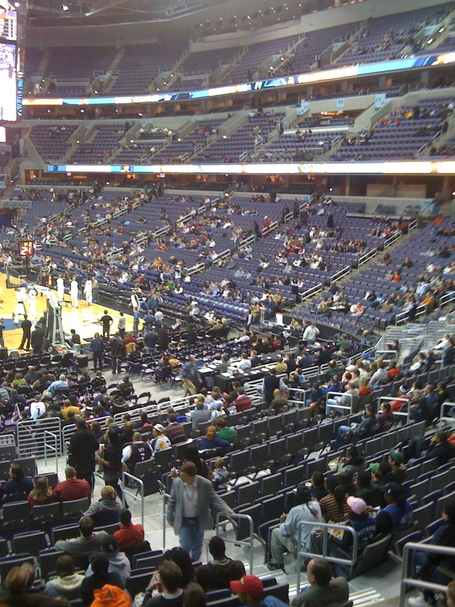