The Hawk Set - Pick and Roll

Share All sharing options for: The Hawk Set - Pick and Roll 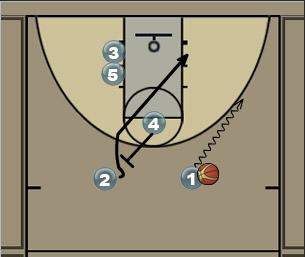 
After the jump, we will look at some Pick-and-Roll plays run out of the Hawk set.

This first play starts from the standard Hawk set. The Point Guard dribbles to the FT line extended, while four sets a screen for two. Two uses the screen and cuts to the low post area. At the same time, five sets a pick for three, who curls around to the top of the key. Next five sets a screen for two, and then posts up, while four sets up the pick-and-roll with the Point Guard on the opposite side of the court. The Point Guard needs to make a decision after he comes off the pick from four...

Notice that there's always the option to pass to 3 above the arc, and from there swing the ball to 2 on the wing and then down to 5 in the block.

This next play utilizes the Shooting Guard and the Power Forward for a Pick-and-roll play in the corner. The play starts with the standard Hawk movement. Two curls around the initial pick, but instead of going to the low post, he fades out to the corner... where the Point Guard passes him the ball. The Point Guard immediately sets a screen for four, to give him a good angle to set up the pick-and-roll with two.

Once two comes around the screen, four either fades behind the 3-point line or rolls to the basket; and two has a decision. Drive to the basket; pull up for a jump shot; hit four with a pass rolling to the hoop; pass back to four on the pop out; or pull the ball back out and start over.

The next play utilizes the Center and the Shooting Guard in a pick-and-roll action at the top of the key. The first action, as always, starts off the Hawk set by having the Point Guard dribble to the Free Throw line Extended, and the four setting the high pick for two. Four immediately turns and sets a down screen for two, and the Point Guard passes him the ball. As three fades to the opposite corner, the Center comes out to start the pick-and-roll. Again, as the Shooting Guard comes around the screen, he has to make a decision; pull up for a jumper, continue on and to drive the basket  or hit the Center rolling down the lane.

If none of those options are open, the Center can step out above the 3-point line. Here, if you had a five that can shoot the 3-pointer (Dirk, for instance), that would be another option - but since we're talking about Haywood and Blatche - it's probably better to just get the ball back in the hands of Arenas and continue on with other options.

This next one should be among Flip Saunders' favorites plays this year, as it gives the Point Guard, in this case Gilbert Arenas about 6 or 7 different options.  In this play, the three starts in the corner, but the the play still initiates with the standard Hawk movement. While the two fades to the corner, and the three cuts to the wing; the four and the five move into position to set a double screen. As the Point Guard comes around that double screen, he has the option drive to the hole, pass to the Center rolling to the basket, pull up for a jumper, or he can pass to the four, three or two for a shot.

I could see this play getting Arenas a lot of assists this year.

As you can see, the pick-and-roll play requires that the ball handler make instantaneous decisions with the ball as he comes off the screens. Should he pull up? Should he pass to the cutter? Should he drive the lane? Should he back it out and start over?

I have a ton of confidence that Arenas can make the right decisions. I also think that other ball handlers like Caron Butler, Mike Miller and Randy Foye should good running off screens. It remains to be seen whether the Wizard's youngsters, Javaris Crittenton and especially Nick Young can make those critical split second decisions.

It's also extremely important to set up the screen and use proper positioning to rub the defender off. Since the Wizards rarely ran pick-and-roll plays under Eddie Jordan (lets face it, besides Songaila and Daniels, I don't think anyone else ever ran a straight p&r play that wasn't built into the Princeton), I have some doubts that the Wizard's players, other than Oberto, can set effective screens. I guess that's why they pay Flip Saunders the big bucks.