The Hawk Set - plays for shooters

Share All sharing options for: The Hawk Set - plays for shooters

I re-read Mike's article about whether Brendan Haywood would get enough touches in Flip Saunder's Offense. One thing struck me.... when he said that he did some "research about Flip's Hawk offense". Well, I know that the Hawk Offense was developed by Hubie Brown while he was coaching in the ABA in the 70's. He later used it as his base scheme when he was with the Atlanta Hawks; and that is where it got it's moniker. But that was the whole of my knowledge. I decided to get a copy of the Hawk Offense DVD to try to at least get a basic knowledge of some of the offensive sets. 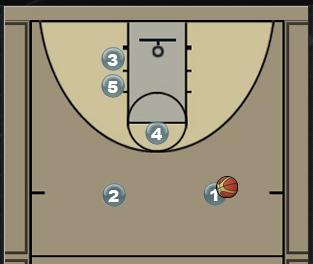 As shown above, the Offense starts with the two guards at the high post... one on either side; with a double stack on the low post. A screener (usually the 4) at the Free Throw line. This picture shows the stack on the left side and the PG with the ball on the right, but the system can be run mirrored as well.

In this series - we'll explore some of the basic plays that can be initiated by the Hawk set. This first article will show some options for shooters.

The Offense is initiated by the Point Guard with a dribble to the wing at the Free Throw line extended. The 4 sets a screen at the top of the key for the 2-guard, who then can cut to the baseline.  From there, any number of options can be initiated. In the following animated play, you can see that there are three options to get the ball to the 2-guard in a position to score. The first option is coming off the high post screen, cutting to the basket; the second option is posting up on the baseline; and finally, coming off a double staggered screen.

This Offense can take advantage of a size mismatch at the 2-guard position, especially a 2 that can post up at the baseline. It's also especially good for a 2-guard that can hit a jumper coming off screens. The Offense also includes almost unlimited options for wing isolations, pick and roll, pick and pop, and big man post ups. (We'll explore some of those later in the series)


Flip seems to have adjusted the Hawk by running it to both sides of the court - and sometimes having the 2-guard initiate the dribble. I remember the exact play diagrammed above was run over and over again during Summer League with Nick Young (as the 2-guard) coming off the double staggered screens, knocking down jumpers all night long.

Based on what we know, Randy Foye is an excellent catch-and-shoot player - but he is also very good coming off screens. Nick Young has been working all Summer long on shooting coming off screens - and he looked particularly good doing it in Summer League. Arenas is deadly coming off screens, since he only needs a split-second to get his shot off. I expect all three of those players will benefit greatly from Flip's Hawk set.

Here's a play, starting off the initial Hawk movement, but ends with the PG coming off a triple staggered screen.

And another play designed to get the Small Forward (3) an open shot.

As a team sees the set over and over again,  the other team's guard may start to go under the screen at the top of the key - the 2-guard can then pop out for an open shot.

There are any number of different ways to get into the Hawk set... Once a team starts defending the regular Hawk set, here's one of the variations to start the action.

Those are just a very few plays available in the Hawk for shooters; most of which require single, double, or even triple screens to get shooters open shots.


Next article - I'll explore some options for post plays in the Hawk Set.