Update from bwoods--sparked by a comment from nate33, I did some more looking at Jamison's fit on that Mavs team. I responded to nate33 in the comments, but have also updated the post to include discussion of how Mike Miller's size and shooting might help open things up for Jamison inside.

This week's column seeks to add a bit more to the Jamison rebounding discussion but heads off into a long digression on the significance of Jamison's season in Dallas. 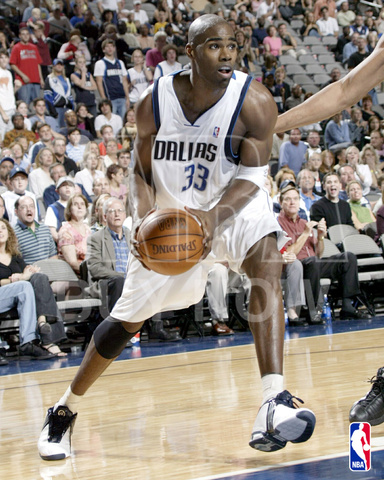 First, a few words on rebounding metrics-I prefer rebound percentages.  Of course, the easiest percentage is how many of available rebounds did the individual player grab.  Another interesting stat is, however, the percentage of available rebounds the team got while the player was on the floor.  Total rebounds are a lot less interesting, because even making a time adjustment (looking at rebounds on a per-36 basis rather than per-game) ignores two really important things largely beyond the player's control-(1) were there more or fewer opportunities to rebound because the team played at an unusually fast or slow pace? And (2) were there more or fewer opportunities because the team was unusually (in)efficient offensively or defensively.  That said, I'll look at Jamison's %s and ignore his counting #s.  Due to a digression that has swallowed the column, I won't much get to the team rebounding impact this week.

The Gentleman has had a fairly unusual career on the boards.  In what might have been expected to be his athletic prime-his 24, 25, and 26 y.o. seasons in Golden State-he was a somewhat sub-par rebounder for a power forward (though not so bad for a small forward, helping along his reputation as a tweener), hovering around a 10% rebound percentage, getting to about 12-14.5% of available defensive rebounds and 6.5-8% of available offensive rebounds.  For some perspective, players in that neighborhood last year were generally solid-rebounding perimeter players like Trevor Ariza and Joey Graham and mediocre-rebounding big men like Jason Collins and Rasho Nesterovic.

Which brings me to the digression.

There has been broad, though certainly not universal, sentiment in the Wiz fan community for moving Jamison to the bench as a 6th man in the role he held in Dallas. What it seems would make a much bigger and better difference, however, would be to have Jamison play inside more as he did in his role in Dallas.

By both PER and Win Shares (and I suspect any other major aggregate measure), he had his most valuable season that year.  Incredibly, he produced more Win Shares that year (9.3) in 2,376 minutes than in any other season of his career.  The closest he came was in 2007-08, when he posted 8.9, but in 700 more minutes.  (Remember that Win Shares is a cumulative stat-playing more should generally get you more of it.  So, that 9.3 WS in 2,376 minutes is awesome.)  Certainly one driver for why the measures like the 03-04 season so much is because of that O-rebound rate.  But, the really big deal were his shooting %s.  His TS% and eFG% that year were both career highs, as he posted impressive numbers of 58.1% and 54.3%, with a fairly high usage rate (20.7%, which is, however, lower than his last two years) and typically low turnovers (7.2%).

That is a lethally efficient offensive combination.  Was some of that simply a result of spending more second-team minutes on the floor and beating up on lesser players?  Perhaps a very little.  (Actually, most of his minutes came with the starters, filling in at SF or PF.)

The overwhelming explanation for the difference, however, seems to be that he played/shot inside so much more, boosting his overall efficiency with more high percentage shots, which both PER and particularly Win Shares, absolutely love.  We've already seen Jamison's advanced shooting percentages improve over the last few years as he has slightly cut down on his jump-shooting.  Maybe the change he can make that would most help the team would not be to come off then bench, but rather to spend more time down low on offense.

I'd be remiss, however, if I didn't note, as a digression to the digression, that Jamison's Dallas team had a certain brilliant-passing PG who Jamison saw a lot of time with and that over 70% of Jamison's inside/close shots were assisted, compared with closer to 60% in recent years with the Wiz.  So, really what we might want is for Jamison to go down low and Arenas to reward him with the ball while he's there.  Also, many of the minutes were with Nowitzki nominally at the 5, so maybe this scheme needs a better j-shooting center to actually work.  As has previously been noted, the Wiz main rotation centers have poor track records as jumpshooters, though Oberto is ok.

On the other hand, as nate33 pointed out in the comments, based on 82games data, Jamison was most effective during the time 82games had him as a SF on that team.  Most of those "SF" minutes were minutes with Antoine Walker on the floor as well.  How 82games decided Walker was the PF and Jamison was the SF in that alignment is beyond me—seems like a tossup. If anyone here watched enough of that Dallas team, please chime in on how they were used. Antoine’s inside vs jumpshot allocation was similar to Antawn’s, except Walker’s Js were generally from beyond the arc (more than 300 wildly inefficient 3-pt attempts vs 40 3-pt attempts for Jamison), which one might associate more with SF than PF anyway. They are the same size and age. So why is Walker listed as the PF while Jamison is the SF?

But, I think how you assign Antoine and Antawn to those forward spots may be a distinction without a difference.  Something I think that is interesting for the 09-10 Wizards is that they might be able to replicate, but improve on that alignment in at least one respect (nothing to be done about the lack of a Nowitzki, though).  It seems to me that Mike Miller could essentially fill that Antoine Walker role, except much, much, much better. Miller is the same height and weights only slightly less, and no one ever accused Walker of playing defense (dude frequently never made it back to the FT line, to my recollection), so I don’t see how much there is to lose at that end. Miller is every bit Walker’s equal on the defensive boards, though not as good on the offensive boards, so you do lose a little something there. But even at Miller’s worst you’d WAY prefer him shooting 3s to Walker shooting 3s. The difference can’t be overstated. Miller is a tremendously more efficient and effective outside scorer than Walker. Surely that would partly balance what you lose in having the Wiz 5s on the floor instead of Nowitzki. I’ve been so focused on Miller in terms of how he fits with Arenas and Butler, but maybe Miller-Jamison is where there is a really useful fit.

Quite a puzzle for Flip to work out.

Since coming to the Wiz, Jamison's offensive rebounding stats have fallen to pre-Dallas levels, fluctuating in the 5.5 to 8% neighborhood, while he has started posting better (and more appropriate for a PF) defensive rebounding numbers.  His defensive rebound % last year was the 3rd best of his career at 20.5%, only 2.8% lower than his career-best the prior season.  20+% is a huge increase from the 12s and 14s of his Golden State career.  I have yet to find another big-minute player who became a notably better defensive rebounder later in their career in quite this way.  Since he only started hitting the offensive boards at a point in his career when he should have been expected to have an even older version of his already old-man-game, it is hard to project when his numbers will fall off due to age.  As Jake already noted, getting Haywood back could make a bit off difference, since he is a much better individual defensive rebounder than Songaila (though not much better by % than McGee/Blatche), but, again as Jake noted, Jamison was getting boards with Haywood here anyway.

So, was the increase due to a change in his personal approach to the game?  Was it a necessary outgrowth of Eddie's small-ball and (other than Brendan) worthless-non-rebounding-center tendencies?  Perhaps.  It will be very interesting to see what he does on the boards this year, and whether it looks like the change in coaching and likely change in defensive scheme has anything to do with it.