Share All sharing options for: Peter John Ramos is Going for Gold

You probably didn't wake up this morning and expect to see news on Peter John Ramos this morning, but every time we get a chance to talk about Washington's favorite Puerto Rican.

This week, the FIBA Amercias Championship is being played in Puerto Rico, and the home team is not doing a great job as host, dominating group play up to this point.  They, along with Brazil, are the only two teams left that are still undefeated.  Not only are they undefeated, but Puerto Rico hasn't even so much as faced a challenge, winning all five of their games by at least 15 points.  They'll have their hands full against Brazil, who features Leandro Barbosa and Anderson Varejao, but at worst it looks like Puerto Rico has a 50-50 shot of winning the FIBA Americas Championship this year.

A key to Puerto Rico's success this year has been Party John Ramos.  Unlike 2004, when he was mainly a bystander while Puerto Rico demolished the USA in the Olympics on the way to finishing 6th in Athens, Ramos has been a vital part of Puerto Rico's success.  He's third on the team in points (11.2 per game).  He also leads the team in in rebounds (8.4 per game) and blocks (1.6 per game).  His performance becomes more impressive when you compare his performance with the other players around him.  Check out the leader board in rebounds per game at the Championship: 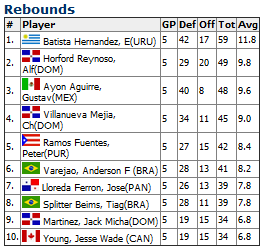 Ramos has some expensive bread sandwiching him on both sides.  Villanueva signed a 5 year, $35 million deal this summer with the Pistons and Varejao re-signed with the Cavaliers for 6 years, $42 million.  It almost starts to make you wonder what would've happen if the Wizards hadn't given up on Ramos after only one season.  Almost.