Share All sharing options for: How the Wizards can use the lower-than-expected 2010 cap projection to their advantage

So by now you have all probably heard about the NBA issuing a memo to teams telling them to expect a significantly lower salary cap and luxury tax level in 2010/11 (that's next year, not this year).  The numbers aren't pretty, as the cap could fall to as low as $50.4 million, with the luxury tax coming in at $61.2 million.  The Wizards currently have just under $56 million committed to 10 players in 2010/11, including Randy Foye's and Dominic McGuire's qualifying offers.  All this is a long way of saying that it's going to be virtually impossible for the Wizards to get under the projected 2010/11 tax level and still keep Brendan Haywood and even one of Foye/Mike Miller.  As weird as it sounds, it probably will be much harder to stay competitive and be under the tax in 2010/11 than it will be to eliminating the impending $6 million tax bill we're going to spend this season.

That's bad news, right?  Yes, but it doesn't have to be if the Wizards shift priorities.  Remember, while the Wizards are in a tough spot if they want to get under the tax, so are a number of other teams in the league.  If you thought the cost-cutting moves made on draft day were drastic, just wait until this year's trade deadline, when everyone and their mother is going to look to sell just to get under that projected tax number.  It's a perfect time for the Wizards to become buyers and really go all-in for a title run, because great players are going to be available for peanuts.

To review: After the Foye/Miller trade, which actually cut salary for 2009/10, the Wizards have $26 million of 2010 expiring contracts.  $20 million of those contracts (Miller, Foye, Haywood) can actually significantly help a team, which adds even more value there.  They also have all of their top young prospects left, though Andray Blatche and JaVale McGee probably aren't going anywhere with the lack of depth up front.  That combination of assets is enough to bring in pretty much anyone the Wizards want.  If they don't bring anyone in, it will be because they aren't looking to spend, not because the pacakge isn't attractive enough.

Basically, I'm suggesting that the Wizards do whatever they can to limit this year's tax bill so that they will have a better opportunity to go way over in 2010/11 and acquire a big time upgrade to their roster for basically nothing.

Before I explain the particulars of this plan, I need to spell out a couple fundamental assumptions that are the basis of this proposal.

1.  The Wizards will not become true title contenders unless they go over the luxury tax: It doesn't matter that there have been teams that have won titles while staying under the tax.  The fact of the matter is, the Wizards are not built like those teams.  They don't have their best player on a rookie contract (Dwayne Wade).  They don't have the two best players in the league on their team (Kobe and Shaq).  They don't have Tim Duncan and the superior management of the Spurs.  They aren't catching lightning in a bottle like the 2004 Pistons (who, it should be noted, had their best player, Chauncey Billups, on an MLE contract).

No, the Wizards have three building blocks who don't have outrageous contract, but are still not bargains.  Gilbert Arenas, when healthy, is worth $111 million, but he's still not underpaid.  Neither is Antawn Jamison, who may actually be slightly overpaid because of his age and lack of defense.  There's nothing wrong with overpaying your core guys, because it's not like you can just pick out another better player and sign him for the $111 million Gilbert got in 2008, but it does mean you have to spend to win.  The presence of several poor contracts among role players (DeShawn, Mike James, etc.), as well as the lack of marquee rookies on rookie deals, means the Wizards need to spend to win. Unless you think the team as currently constructed is a title contender.

2.  Abe Pollin doesn't want two straight huge luxury tax bills: It's not clear how valuable Abe Pollin is, but I'm pretty sure he won't want to pay two straight tax bills of over $5 million to the league office.  If he's going to pay one tax bill to win a title, it's better to do it during a climate where adding salary in the form of better players is easier to do.

All that said, how do we shave $6 million off our current payroll (which in reality is more like $8 million to account for the cost of a veteran-minimum of low-level exception big man?  There are a couple ways to do so, but we have to jump on them right now.

One is to make a trade with a team under the salary cap right now.  Teams don't need to match salary in trades if they are under the cap.  Currently, the following teams are under the $57.7 million cap.

Detroit: About $53 million for 10 players

Memphis: About $47 million for 10 players with the Zach Randolph trade

Oklahoma City: About 48 million for 14 players

Portland: About 47 million for 10 players

Sacramento: About 50 million for 10 players, not including Ike Diogu's qualifying offer

Those are all options to pawn off DeShawn Stevenson (if we're really lucky), for example, or someone like Javaris Crittenton or Nick Young.  For example, Stevenson to Memphis for a conditional second-round pick might work if Memphis doesn't sign Allen Iverson.  That would save us Stevenson's salary and we'd just sell the second-round pick anywy.  Crittenton to Sacramento for a conditional pick might also work, saving us $1.2 million or so for Crittenton's salary.  Oklahoma City might also be interested in Crittenton for their cap space.  It sucks to lose a player for nothing, but Crittenton and, to a certain extent, Nick Young weren't going to play much anyway this year, so the extra tax savings are worth it.

The other alternative is to trade to a team that has a trade exception.  What's a trade exception, you ask?  Anytime that salaries don't match up in a trade for whatever reason (whether it's through the 125% for 100% rule, or whether you trade into a team's cap space), the team that's short ends up with a trade exception which they can use to acquire a single player under contract elsewhere to "complete" the trade.  Teams can do this for up to a year, otherwise the exception expires.  A further explanation is here from Larry Coon's salary cap FAQ.

Here's a list of traded player exceptions for more than $1 million currently exist, along with the date it expires and where they come from.  (Courtesy of Wyn's comprehensive salary page). 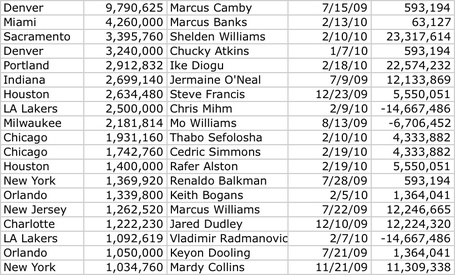 (Note: That list doesn't include the $7 million exception Orlando just got by inserting itself into the Shawn Marion sign and trade).

So those are all options as well.  There may also be more trade exceptions that pop up in the next year or so that we could take advantage of.

That isn't going to shave off $8 million dollars, unfortunately, but it could get us close.  Close may be good enough considering the following windfalls Abe Pollin has.

That doesn't give the Wizards free reign to go $11.2 million dollars over this year's luxury tax, but it does give Abe flexibility where the Wizards can shave some more money off this year's payroll and still have some left over to act as a buffer if they need to go well over the tax next year to make the necessary upgrade to build a title contender.  The Wizards will also likely be more profitable next year with a good team, which means home playoff games and more merchandise sales.  The Wizards were right in the middle of the NBA franchise rankings on Forbes in 2008 (15th), and while they undoubtedly took a hit last year, they'll probably climb back to the middle of the pack this season.  We don't know the Wizards' specific financial situation beyond that Forbes summary, but they should be able to take the hit without too heavy a loss.

So, as an option, let's say the Wizards dump Stevenson on Memphis for a conditional pick and then trade Crittenton to the Knicks for their exception.  Or, the Wizards dump Stevenson and trade Nick Young to the Bulls for their exception.  Those moves save the Wizards $5.3 and $5.5 million, respectively.  We then replace those slots with a veterans minimum big ($1.3 million) and a D-leaguer (~$500,000), leaving two spots open in case of injuries.  Our roster is as follows:

That team's just as good as the one we have and it costs around $4 million less.  Then, we use our assets to make a big move and really become a title contender in 2010.

The alternative is to still try to skirt the lower 2010/11 luxury tax, but we're not going to make much of a talent upgrade doing that.  We're going to have to try to make yet another unbelievably creative move like the Foye/Miller trade that somehow improves the team and cuts salary.  It won't be a move that makes any more than a marginal difference, increasing the celing of our current 45-50 win team to maybe 47-52 wins.  And that's best-case scenario.  The other thing that could happen is we lose Brendan Haywood, Mike Miller and Randy Foye and replace them with inferior players.  That's not progress at all.

No, at a certain point, to become a real title contender, we have to take on some long-term salary and go into the luxury tax.  The next year provides some great opportunities to do that without surrendering much on-court talent.  If we're willing to take the tax hit, we can really take advantage.  And if we continue to cut some costs here and there creatively to shave off our current tax bill, we'll be better equipped to go over the tax next year when we really can make the most of doing that.