Sam Cassell is Already My Favorite Assistant Coach of All-Time

Share All sharing options for: Sam Cassell is Already My Favorite Assistant Coach of All-Time

Sure, I was excited like most of you when I heard that Sam Cassell would be a part of Flip Saunders' coaching staff.  It's always exciting when a former NBA player joins the coaching ranks, especially a great communicator like Cassell.  He gives the coaching staff a fiery, but positive leader who can motivate players to greater heights (something that the Hire Avery Johnson crowd desired) but he doesn't have the authority to micromanage everything to death like Avery Johnson could've if he'd been given the reins.

Since his hiring, we've heard good things about his work with Nick Young on coming off screens, working with Javaris Crittenton on his pull-up game, and Mike glowed about Sam's coaching style in Vegas.  He looks like he's going to be an excellent addition to the staff and I don't think it will be long until he's coveted by someone for a head coaching gig.

As excited as I am to see how Cassell grows and develops as a coach over the next few years, I'm just as excited  to hear all the wild and crazy stories that are bound to emerge of Cassell jawing with his players during practice and games.  It should be great fodder for many posts in the near future.  Via Roger Mason Jr.'s Twitter, we have our first example: 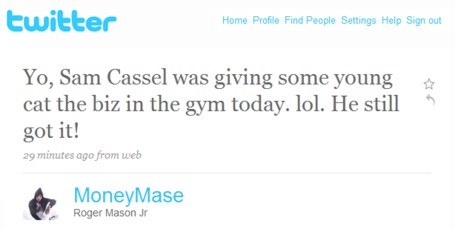 Win, lose, or draw Sam Cassell is going to keep things interesting in Washington next year.  It should be fun to watch.