Share All sharing options for: Mapping Gilbert Arenas on a pure PG scale

Jake's post on Gilbert Arenas the other day was right on point.  Way too much has been made about Gilbert Arenas not being a "true point guard."  The team's offense worked well with Gilbert doing his thing, and it's far too big of a transition to ask GIlbert to become a completely different player, even if he keeps talking about changing his game.  (My guess is it's out of worry that he can't be the same Gilbert, not because he thinks it's necessarily better for the team for him to change his game).  We shouldn't want Gilbert to become purely a passer, because it'll take away from what he and the team does best.  Likewise, we want him to get chances to score off the dribble, since he was so lethal at that when healthy.

Still, this does make classifying Gilbert pretty tricky.  It's important to get an idea of what type of lead guard Gilbert Arenas actually is because it matters in finding the ideal backcourt partner.  On the one hand, GIlbert's best creating with the ball in his hands, making it seem like the perfect partner is a pure spot-up shooter in the John Paxson or Jason Richardson mode.  On the other hand, however, handling too much of the ball-handling has wore Gilbert down in the past, and he's demonstrated that he also is very capable scoring when others create for him.  That would make it seem like he would be best shifting to the shooting guard with a purer point guard like Jose Calderon being his set-up man.

Which of those two archatypes makes the most sense?  Do you surround Gilbert with a spot-up shooter who will allow him to exclusively operate with the ball in his hands?  Do you give him someone to relieve the ball-handling duties and allow him to function as purely a scorer on offense?  To figure out which is closer to the truth, we must figure out where Gilbert Arenas himself sits.

More pondering below the jump.

That leads me to this method to determine point guard "pureness."  My hypothesis is that, on the whole, the purest point guards create plays, but don't often finish them.  That isn't to say they don't score.  Chris Paul practically epitimizes the phrase "pure point guard," yet he finished seventh in the league in points per game this year.  What it does mean is that most of the points the purest point guards score come off shots they create themselves.  They aren't scoring too many assisted field goals because, as the best creator on the team, they are entrusted with the ball in their hands to make plays far more than anyone else on the team.  The purest point guards control the ball more than their teammates; ergo, they have less chances to score off someone else's shot creation.

I decided to put each of this year's starting point guards to the test on this scale, then averaged Gilbert Arenas' percentages from his four healthy years in DC and graphed that too.  Here's how it all came out. 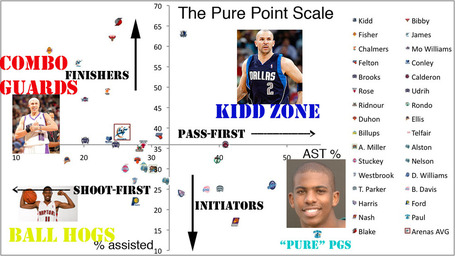 As expected, most point guards with high assist percentages relative to their peers didn't have many of their field goals assisted.  The exception is Jason Kidd, who somehow managed to both finish a lot of plays (63 percent) and create them (34.7% assist percentage).  The only one to come close to Kidd is Jose Calderon (36% finished, 41% assist %).

The pure point guard quadrant is made up of the players you'd expect: Chris Paul, Deron Williams, Steve Nash, Rajon Rondo, Tony Parker, Baron Davis and Devin Harris.  By this scale, those are the only "pure point guards" that exist in today's game.  The vast majority fall into the "ball hogs" category (which is not a negative; it just means they create fewer opportunities for their teammates than average while also not scoring much off assists from others) and the "combo guards" category (players who score off other players' assists more than average).

The boxed logo is Gilbert Arenas' four-year average.  In his four years in DC, he averaged a 25.65 assist percentage, which is in the bottom third of his peers, but is ahead of the marks of players such as Mike Conley (23.7) and Monta Ellis (who ranks second-to-last at 17.5 percent).  An average of 39 percent of his field goals were assisted in his four years, slightly above the average.  It should be noted that this percentage went down every season, from 44 percent in 2003/04 to 37 percent in 2006/07.  Arenas would have been 22nd out of 32 in assist percentage with his average and 8th out of 32 in percentage of field goals made that were assisted.  This makes him fit the profile of a combo guard, clearly.

For the players on the extreme, it's easy to find a backcourt mate that complements their strengths.  Williams, Paul and Nash are surrounded by catch-and-shoot guys like Jason Richardson (8.7 assist percenage, 67% of FGs assisted while in Phoenix), Rasual Butler (4.8, 78%), James Posey (6, 68%), Ronnie Brewer (10.9, 74%) and Kyle Korver (11.1, 92%).  At the other extreme, Derek Fisher, Mike Bibby and Steve Blake are surrounded by shooting guards who have high assist percentages such as Kobe Bryant (23.8%), Joe Johnson (26.4%) and Brandon Roy (25.4%).  The law of diminishing returns is at play here, as you can't get two asissts or two assisted field goals made on the same possession.  Nevertheless, Blake, Bibby and Fisher all had a high percentage of field goals assisted in their year before switching teams (Blake was at 62% with the Wiz in 04/05, Fisher at 59% with the Jazz in 06/07 and Bibby at 59% with the Kings in 06/07), and nobody could have mistaken the first five for creators before they got to their respective teams.

But what of combo guards?  The following players were both within five percentage points of Gilbert in assist percentage and within ten points in percentage of assisted field goals. 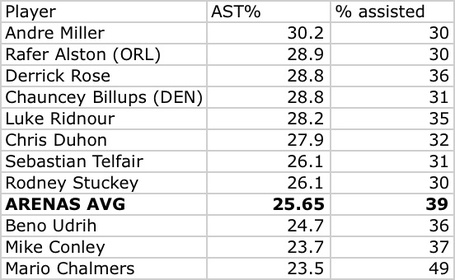 A couple things should jump out at you.  One is that Arenas' closest comparison is probably Sebastian Telfair.  That's problematic, of course.  The other is the inclusion of Chauncey Billups' name on this list.  Billups isn't Arenas' closest comparison -- he's over three percentage points better in assist percentage and has eight percent fewer of his field goals come from assists -- but he's within striking distance.  Perhaps having Arenas turn into Billups isn't the worst thing in the world.

The question you are probably asking yourself is what effect Flip Saunders will have on Gilbert Arenas.  One of the biggest things that seems to be the case about Flip's offenses is that they have "true" point guards running them.  How true is that? We'll go back only to 2003 since 82games's data ends there.

Once again, there's some hope for Arenas.  Billups' three years in Detroit fall somewhat within reach of Arenas' numbers.  Billups' assist totals were a bit higher than Arenas' range, but not by a whole lot.  There's also 2006/07, when Billups' assist percentage was very close to Arenas'.  Meanwhile, Billups was consistently within Arenas assisted basket percentage average, though he was always lower.  It's important to remember here that Arenas' assisted basket percentage has fallen for three straight years, so already he's doing less catching and scoring than he did when he first got to DC.  Cassell, on the other hand, doesn't provide much hope, while Hudson is basically Arenas on steroids, playing more like a shooting guard than a point guard.

This is all a long way to get to the real issue here, which is how to surround a player as unique as Arenas effectively in the backcourt.  We've run a ton of players alongside Arenas, but none has really stuck.  Who is the proper type of backcourt partner for Arenas?  We'll explore that question in part two.